Yesterday, we gave you the trailer to the new drama directed by Tony Kaye (American History X) starring Adrien Brody. Today we have the official poster that goes as far as to advertise it as “A Tony Kaye Talkie”. Apparently, the success of The Artist is making directors flirt with just labeling their works as films. If Spike Lee can refer to them as “joints” why not call it a “talkie”?

The drama will be available beginning February 24th via Movies On Demand from your local cable provider, iTunes, Amazon Watch Instantly, VUDU and more, before have a small rollout theatrically in select cities beginning March 16. 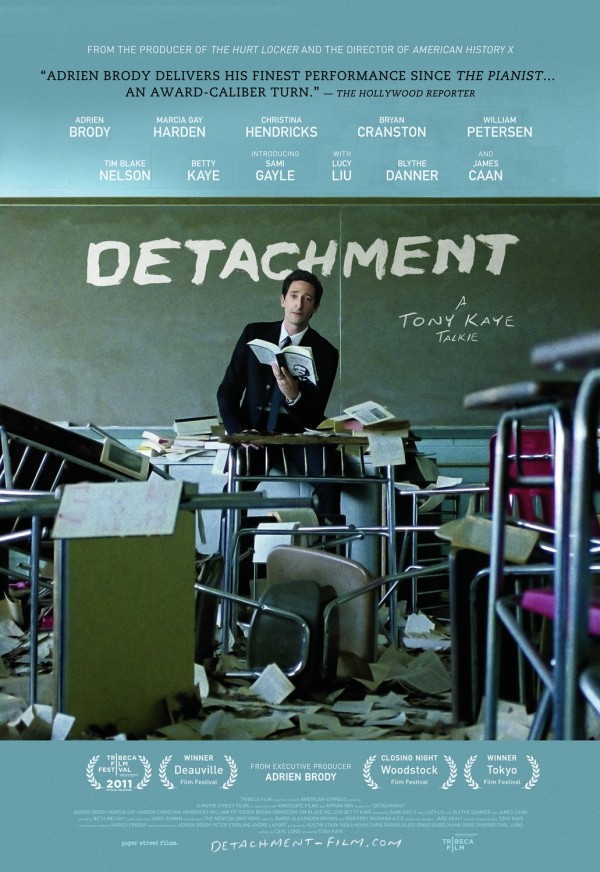 Adrien Brody stars as Henry Barthes, a substitute teacher who conveniently avoids any emotional connections by never staying anywhere long enough to form a bond with either his students or colleagues. A lost soul grappling with a troubled past, Henry finds himself at a public school where an apathetic student body has created a frustrated, burned-out administration. Inadvertently becoming a role model to his students, while also bonding with a runaway teen who is just as lost as he is, Henry finds that he’s not alone in a life and death struggle to find beauty in a seemingly vicious and loveless world. Detachment also features an all-star supporting cast, including Christina Hendricks, James Caan, Bryan Cranston, Marcia Gay Harden and Lucy Liu.