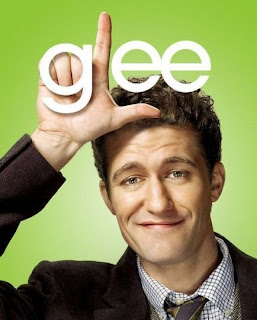 Brace yourselves, for I’m about to rant.

I was looking forward to this episode of Glee. Will proposing to Emma? I’ve been waiting for that since before the ink on his divorce to Terri was dry. I’d even seen some positive tweets about the episode from critics who got an advanced screener of the episode, so I was hoping this big episode would help redeem this season of Glee for me, at least a little bit.

This is what I get for being an optimist. I’m not sure I could have hated this episode more. Aside from a few small details (Hi, Helen Mirren! You’re still awesome!), I hated everything about “Yes/No”. EVERYTHING.

Synchronized swimming? What the hell was that? THAT was the big romantic proposal? Barf. And I’m sorry, but can we talk about Will asking FINN to be his best man? WHAT? That screams inappropriate. WTF, Will Schuester? Where are all your adult friends? In what universe is it OK to have a high school boy who you teach act as your best man and plan your bachelor party? He’s a teenager! That should be illegal!

Ranting aside, I think that scene indicated what has become a huge flaw for the character of Will Schuester and Glee in general. In order for a show with a big cast like this to work, you need to get the feeling that characters have lives outside of what we see on screen. Sometimes that comes across, like what we see with Kurt and Rachel’s friendship, or the time we got a little more insight into Santana and her grandmother. But the show has epically failed when it comes to Will. His character has been shoved into this weird McKinley High vacuum where suddenly he has no outside life. No friends, no family, no issues or storylines that don’t immediately relate to the glee club. And that’s weird.

OK. Deep breath. Let’s take it from the top. 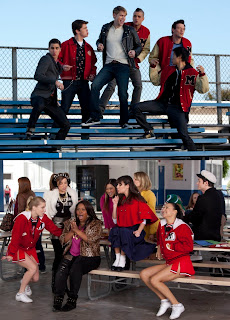 Things started out fine. I’m a Grease fan, so I rather enjoyed Mercedes and Sam’s take on “Summer Nights”. I like those two as a couple, and I’m totally fine with the idea of Mercedes feeling conflicted and confused about this love triangle she finds herself in. It was one of the few bright spots in the episode. I also liked the way the performance was set up, more as a fantasy than an actual performance. Glee did a lot of that this week, and it’s something I think the show should try to do more.

Meanwhile, Becky’s inner voice (which was Dame Helen Mirren – “You may be wondering why I sound like the Queen of England. It’s simple. In my mind, I can sound like whomever I want. So lay off, haters!”) let us know that she has a big crush on Artie. She went to Sue for advice, who said she could do better than Artie but should ask him out if she likes him. The worst outcome is that he could say no.

Sue Sylvester was full of advice and warmheartedness this week. She barely flinched when she found out that Coach Bieste and Cooter the football recruiter had eloped, and when Emma sighed that she wasn’t sure Will wanted to marry her she told her to do it herself – after all, it’s not the 1950s anymore. When did Sue get so helpful?

That led to another fantasy musical sequence, probably my favorite of the night – Emma singing “Wedding Bell Blues” by Laura Nyro (or The 5th Dimension), but changing the lyrics from “marry me, Bill” to “marry me, Will”. The lyrics fit the situation perfectly, and I thought Jayma Mays did a really excellent job.The best part? Singing backup were Sue and Bieste, wearing those godawful hats from the royal wedding. That? That was hilarious.

And then it all went to hell. 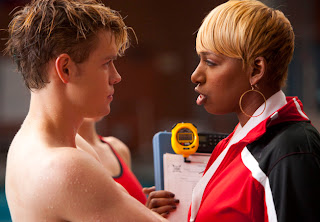 Sam wants to win back Mercedes, but she wasn’t ready to dump her new boyfriend Shane. Sam assumed that it was either a) Because Shane is black or b) Because Shane has a letterman’s jacket. Oh Sam. Pretty, but dumb. He decided that to win Mercedes back he’d have to also get a letterman’s jacket, but the only team that still needed athletes was synchronized swimming. NeNe Leakes appeared as the coach, which was kind of funny but mostly just came out of nowhere.

Meanwhile, since Emma had accidentally blurted something out about marriage following her fantasy sequence song, Will decided that it was finally time to ask his ginger-haired OCD soulmate to tie the knot. Obviously, the first people he announced his major news to was the glee club. Why? They’re children! Get some friends, Will! Where are your parents? Don’t you have any siblings? Argh!

The kids’ assignment for the week was to come up with a number that would knock Emma’s well-washed socks off. Because if there’s anything a marriage proposal needs, it’s the presence of 15 teenagers singing about true love. Kind of like the time New Directions performed at Sue’s sister’s funeral. Stop letting these kids get so involved in your personal lives!

From there, Will continued to botch the proposal even more. First, he asked Emma’s weird, hateful parents for their blessing. Obviously, they said no. They also planted some seeds of doubt in his head – how would their crazy daughter deal with the mess of babies? Oh no! Looks like Will has changed his mind, and he basically said that to Emma. Will telling Emma he had doubts about marrying her was like stomping on a kitten.

Later, Will went engagement ring shopping with Finn. Yes, Finn Hudson. A student. And then he asked Finn to be his best man. Ridiculous. But it gets even better! And by better I mean far, far worse. After accepting Will’s offer to be his best man, Finn decided to confide something in Will. Now, considering he’s just agreed to be the BEST MAN AT HIS WEDDING, you could assume that Finn was telling this to Will as a supposed best friend, and not a student. It turned out that Finn was considering enlisting in the army after high school, to follow in the footsteps of his war hero father.

Cut to the next day, where Will has called a very teacher-like meeting with Finn, Emma and Finn’s parents. Wow, what a guy! It turns out that no one wanted Finn to join the army. Guys, this was super weird. What was the message Glee was trying to get through here? I wouldn’t be psyched for my kid to enlist either. It’s dangerous, being in the army. But what happened was weird – Finn’s mom told him that his dad hadn’t died at war. He came back from Iraq a different guy, with serious troubles. He became a drug addict and died from an overdose.

It just felt like the lesson being jammed down everyone’s throat was “Don’t join the military because war turns people into junkies!” I’m not saying there isn’t an interesting dialogue to be had about how war changes people and can ruin their lives, but this storyline was handled so clumsily.

Meanwhile, Artie accepted Becky’s invitation to go to Breadstix and had a really good time. But the situation was complicated – Artie liked hanging out with Becky and ignored his friends’ suggestions that he might be leading her on, but then he freaked out when she suggested the two become…intimate. This was also a storyline that was handled clumsily. Was I really supposed to be OK with the idea that Becky had sent Artie a racy photo? That’s a touchy subject for all high school students – they’re minors so it’s technically child pornography, photos can surface later and ruin your life, etc. That’s a real issue, and it was completely brushed aside. Then add into the mix the fact that Becky has Down Syndrome? There’s just no way you can ask me to be fine with the idea of a teenager with Down Syndrome using a cell phone to send a racy photo to a boy.

Artie went to Sue for advice – what is she, vying for Emma’s job? – who told him to treat Becky like a real person and be honest with her. Well, at least Glee kind of got that right. Sue has remained consistent in her view that people with special needs should be treated how they want to be treated – like everyone else. Sue consoled a brokenhearted Becky with ice cream and a chick flick, and that was rather nice to see. However, I also felt like it sugarcoated a deeper issue. Becky knew that Artie didn’t want to go out with her because she has Downs. And at some point, Becky will have to know she won’t be able to date boys like that. I mean, if you saw a dude dating a girl with Down Syndrome wouldn’t you be uncomfortable? Wouldn’t you assume he was taking advantage of her? This is thin ice and I’m trying to choose my words carefully, but overall I just felt like Glee tried to tackle this sensitive storyline that needs to be handled with kid gloves, and result felt off. 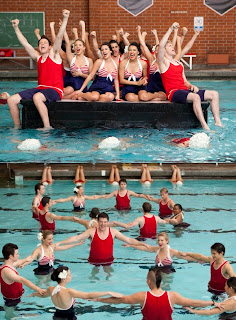 OK, the proposal. I thought it was lame! High school students performing a synchronized swimming routine while singing a Rihanna song? A song about finding love in a hopeless place? What’s the hopeless place? Lima? Will’s first marriage? Emma’s OCD? That’s not romantic! Anyway, Emma said yes and I’m happy they’re getting married. But man, was that stupid.

OK, on to the “big twist”. I don’t know about y’all, but I saw Finn proposing to Rachel from a mile away. Like, all season – was it really never supposed to cross my mind that Finn might propose to Rachel as a way to secure the one good thing in his life? Come on. Anyway, I hate teenagers getting engaged so I really hope she says no. I also really hope she gets into NYADA. I know there isn’t going to be a Glee spinoff with Rachel and Kurt living in New York, but I just don’t think a girl like Rachel would stay in Lima, Ohio. Rachel, Finn and Kurt are staying on Glee next season, and I hope the show finds a realistic way to include their storylines. But I don’t have high hopes.

OK, what did you guys think of “Yes/No”? Did you hate it? Love it? I think it was a polarizing episode, so sound off in the comments!

Other thoughts and favorite quotes from “Yes/No”: