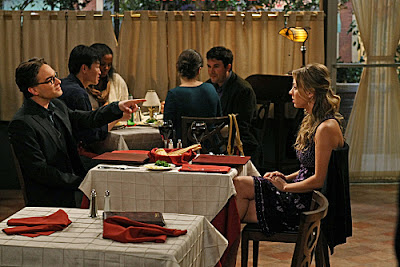 Happy 100th, episode, The Big Bang Theory! To celebrate this milestone, the show decided to revisit the idea of Leonard and Penny as a couple. It turned out that most of what we saw was a fake-out, which is a decision I had mixed feelings about.

Leonard just up and decided to ask Penny out on a date, approximately two years after they last broke up. She agreed, and after spending some time picking out a hot outfit with her gal pals, the two went out for dinner. It didn’t go well.

Later that night, Leonard got a text message from Penny. The two ended up sleeping together, and then agreed that they would publicly announce they were back together until they could privately figure out if it was a good idea. That turned out to be a mistake, since some ribbing from their friends about the failed reconciliation caused more arguing. They end up in bed together again, and Leonard tells Penny that he can’t imagine any positive outcomes for their relationship.

Cut back to the top of the stairs, where Leonard had originally asked Penny out. Everything that had happened was just Leonard thinking through whether it was a good idea to try and get back together with Penny – despite the less than promising sequence of events that played out in his head, he went ahead and did it. Penny accepted, but the episode ended before we saw them actually go out.

On the one hand, I thought the fake-out was both expected and cheap, and I felt like the writers didn’t do a good enough job setting up Leonard’s motivations for asking Penny out. We’ve known for a long time that Penny isn’t over Leonard, and I would have liked to see more of Leonard’s side of the equation. That said, I was glad the whole thing wasn’t real because I do want Leonard and Penny back together. However, if that happens it needs to be different than last time. We need to see that these characters have grown as people since they were last together and that the relationship will be different this time. Otherwise, what’s the point?

I read another review that criticized the low-brow humor in the rest of the episode, specifically the scene with Sheldon, Raj and Howard playing Settlers of Catan. Maybe it’s because I was recently introduced to that game and am now obsessed with it, but I thought that was hilarious. Everyone makes those jokes when they play, and it was so fitting that Sheldon wouldn’t get it.

Even though I have mixed feelings about “The Recombination Hypothesis”, I’m glad to see some plot movement when it comes to Leonard and Penny. What did you guys think? And check out a few of my favorite quotes and moments from the episode: