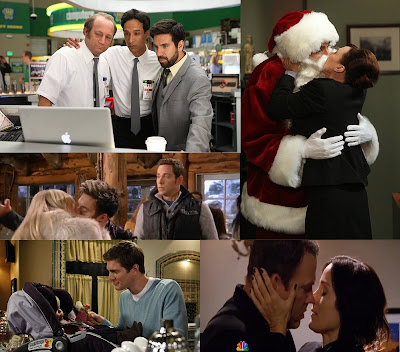 Guys! I know I haven’t written about Chuck very much this season. I’m not blaming NBC, I know what the show’s ratings are like and I’m just happy to have gotten five seasons of the show.

But – BUT – holy crap, can we talk about how great this season has been? SO GREAT.

Admittedly, I was a little worried when the season began. At first, Morgan having the Intersect and the gang breaking out on their own wasn’t bringing the excitement previous seasons had. But now it’s all tied together, making perfect sense, and I absolutely love where this season has taken us. There’s been loads of action, beautiful heartwarming moments, and hilarious storylines. I mean, Jeff and Lester? This was their best season yet, I think.

Now there are only two episodes left, and they both air this Friday night (January 27th). First, let’s quickly recap a few of the highlights from the season since I last checked in on the blog.

“Chuck vs. The Hack Off”, December 9: An appearance from Abed! What’s not to love?
“Chuck vs. The Curse”, December 16: This episode saw Ellie and Awesome get captured after a case of mistaken identity, and it was such a good opportunity to let Sarah Lancaster and Ryan McPartlin show us what they’ve got.
“Chuck vs. The Santa Suit”, December 23: General Beckman kissing Chuck. Unbelievable. In a good way. Also, I loved seeing the return of Shaw.
“Chuck vs. The Baby”, December 30: This was SUCH a great episode for Sarah, since we finally got to learn about her relationship with her mother. It was totally unexpected, and I loved it.
“Chuck vs. The Kept Man”, January 6: This episode was all about letting Adam Baldwin remind us that he’s really funny. Plus, this episode had Sarah thinking she might be pregnant, and her and Chuck’s desire to start a family soon have been a major theme for the past few episodes.
“Chuck vs. Bo”, January 13: I’ve never been the biggest Jeff and Lester fan, but they were hilarious in this episode. I love how Jeff has become such a level-headed dude this season, because it really freshened up how that duo interacts with each other and how they come into play in the series overall. Plus, Bo Derek and the return of Morgan’s horrible frosted tips!

“Chuck vs. The Bullet Train”, January 20 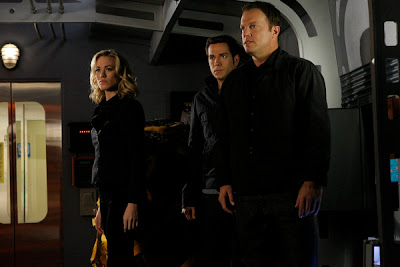 OK, so I just finished watching this episode and it was SO exciting. As you can gather from the quick comments above, this season has really given all our favorite characters their moments to shine. It’s been absolutely fantastic. This episode managed to bring almost all our favorite characters together (I’m sure we’ll see Beckman again before the series is through) in such a dramatic, suspenseful, wonderful way.

In order to save Chuck last week, Sarah had to download the damaged Intersect program – the one that made Morgan go crazy – into her head. Sarah had a bunch of amazing, bad-ass moments, but then the Intersect started to hurt her brain. Turns out it’s the amount of flashes that start making the brain deteriorate, and Sarah had flashed about 40 times in only two days. While Sarah, Chuck and Casey were fighting Quinn on the bullet train in Japan, Alex had been taken hostage by some baddies in Burbank.

Continuing the incredible journey of Jeff and Lester, they spotted Alex getting led out of the Buy More by gunpoint and knew something was up. Morgan and Awesome were busted after only a couple minutes, but Jeff and Lester actually managed to save Alex, Morgan and Awesome with a little long-distance help from Casey. It was fantastic. In particular, the fact that they played “Oh Canada”.

After sharing some really sweet moments regarding their desire to settle down and start a family, Chuck and Sarah are seeing that vision being put in serious jeopardy. Sarah was captured by Quinn, who not only used the Intersect to torture her but cleared her mind of memories. She woke up alone and confused in a hotel, and Quinn has told her that he’s her CIA handler. Her mission? Take down one Chuck Bartowski.

I have faith that Chuck and the gang will be able to save Sarah – that drawing Chuck made of him and Sarah, their picket fence and their baby will almost certainly come into play – but it won’t be easy. We’re getting a double-header of episodes on Friday, and I have no doubt that I’ll be on the edge of my seat the whole time.

So if you’re a Chuck fan, head down to the comments section and let me know what you’ve thought of this season.