Casts for the upcoming installments of Survivor and The Amazing Race have been announced and, let’s face it, it can be kind of fun to make sweeping judgments about people based on their photos and a few small facts about their lives.I’m talking about forming your opinion before even watching video interviews – because, as many of you know, thanks to my participation in a Survivor office pool I do painstakingly view all the Survivor cast interviews I can get my hands on.

But this is just for fun. Let’s go.

You can see a full gallery of the new cast here , and I’m sure I’ll have more to say about Survivor after I watch the video interviews. 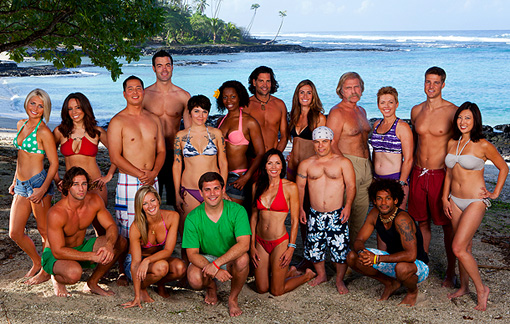 Chelsea: Another blonde country gal.
Matt: Is he really an attorney? He looks like one of those models they find poolside in Vegas and cast on the show.
Kourtney: I feel bad for Kourtney, because when her mom decided to spell her name a stupid way I’m sure she wasn’t yet aware of the Kardashians.
Colton: Colton is a gay republican who considers himself a mix of ” Queen Parvati, Corinne, and JT.” So…pretty, mean and stupid? Or smart, curly-haired and Southern?
Kat: Another pretty blonde.
Jay: I was going to make another joke about how Jay looks like a model, but then I read he actually is a model. Didn’t the Survivor casting department learn anything from casting Cochran? We like nerds!
Alicia: I’m judging Alicia based on her swimsuit, and I bet you are too.
Troy: He wants his nickname to be “Troyzan”, so I’m obligated to hate him.
Christina: If you’re a career consultant but live in L.A., does that mean you mostly just help find aspiring actors, writers and models gigs at the nearest Starbucks?
Leif: As the first little person to compete on Survivor, Leif doesn’t stand a chance in hell of making it to the finals. Too many people get freaked out that someone with a disability will beat them in the finals.
Monica: The only thing more obnoxious than listing your occupation as “Ex-NFL Player’s Wife” might be listing it as “Ex-NFL Player’s Ex-Wife”.
Michael: Michael thinks he’s like Ethan and Rupert. So, one of the most beloved players in Survivor history who won for being a really nice dude combined with one of the most resented players in Survivor history who was handed a million dollars for getting a flattering edit?
Sabrina: We don’t have much to go on here, but she looks nice in pink.
Greg: Why are his pants so very high? Are they going to be like that all season? I will find that distracting. And is Rick from last season going to beat him up for appearing with an even bigger mustache? Is there some kind of “Ron Swanson Survivor Mustache of Greatness” prize to be awarded?
Nina: Nina won’t do well. I can tell because she’s a middle-aged woman with a short, severe haircut who is also a cop and compared herself to Stephenie LaGrossa and Sue Hawk. It’s like the perfect cocktail of a bossy, shrill, completely self-unaware player. Who wants to bet that she’s freaking out about building the camp before her tribe has even introduced themselves?
Bill: I’m not sure I’ve ever seen a dude and a name that don’t jive up as much as this guy and the name “Bill”. Bill is a stand-up comic, which means he could either be really funny and entertain his tribe during those long, boring days and nights, or he won’t be as funny as he thinks he is and everyone will hate him.
Kimberley: Another pretty girl.
Jonas: A sushi chef? That could come in handy.

You can see a full gallery of the new cast here, so follow along as I offend some people. 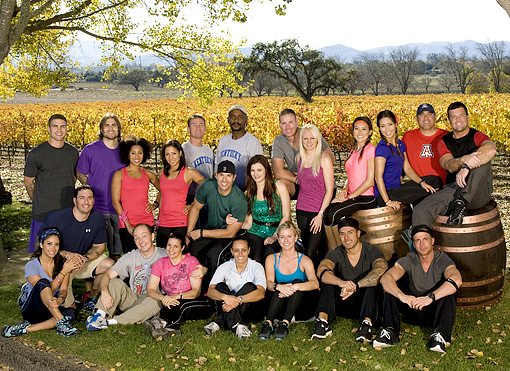 Rachel & Dave: We all think Rachel looks older than 30, right? I don’t see clean freak Dave doing well with the chaos of the race.
William “Bopper” & Mark: I love these guys already. I mean, one of them is called “Bopper”! Their ages might work against them, but I have a feeling they’ll be likable.
Nary & Jamie: Federal agents??? Do they know Phillip Sheppard?! I hope they do. They both think the other one is stubborn, so this should be interesting.
Brendon & Rachel: So many thoughts! All flooding my head at once! I heard these people were going to be on – I don’t watch Big Brother but I know from Allison’s posts that I hate them. If that wasn’t enough, I once listened to a podcast that featured an interview with Rachel and afterwards my ears were bleeding. Is that guy really a Ph.D. student? Is he getting his doctorate in going to the gym? He’s at UCLA, so I wouldn’t be surprised. And if I didn’t already know I will hate these people, Rachel’s outfit would be enough to convince me. Legwarmers I can get behind; the sparkly top on The Amazing Race not so much. Together is just plain obnoxious.
Joey “Fitness” & Danny: They’re not from New Jersey, but in my mind they’re from Jersey Shore. Sadly, this seems to have become requisite casting on reality TV shows.
Misa & Maiya: Even though they’re not the twins on this season (that’s Elliot & Andrew), I won’t be able to tell these two apart. And since when is “Car Buyer” an occupation? Can I have that job?
Dave & Cherie: Speaking of imaginary professions, at least Dave and Cherie put quotes around “Ambassador of Laughter” so we know it’s a bunch of crap. I’m assuming they’re either unemployed or really pretentious clowns. Stand-up comics have too much self-respect and cleverness to use that term.
Elliot & Andrew: Wasn’t it nice of Andrew to shave his head so the viewers at home will be able to tell these twin bros apart? Also, I had to Google “MLS” to figure out that Andrew is a soccer player. So a musician and a soccer player? And they’re cute? I see CBS casting got my email, then. These guys could do well.
Kerri & Stacy: Stacy, being a basketball wife does not count as self-employed, even if you made it your job to marry a basketball player. Based on their pet peeves about each other, I don’t see these cousins going far.
Vanessa & Ralph: I think I’m going to like these two just because one of Vanessa’s pet peeves about Ralph is “he ends his sentences with prepositions.” Let’s just hope he’s not as much of a Grade-A jerk as she says.
Art & J.J.: Border patrol agents who have plucked eyebrows and gold chains? Be still, my fluttering heart. I don’t think I’ll like these guys.

OK now, hit me with your snap judgments!