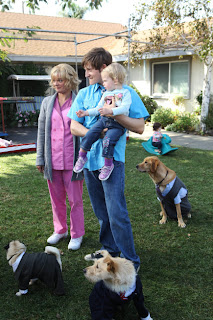 I won’t say too much about last night’s episode of Raising Hope, but I found it delightful. Burt’s foray back into gambling, and the fact that both Jimmy and Virginia followed him there, provided a lot of comedy gold. From Burt’s crazy twitches to Virginia’s beloved Porchester collection to the group “Gamblers Incognito”, I thought it was all hilarious.

Back when Burt was gambling in the 90s, Virginia got him to quit by pretending like she and little Jimmy had been beaten and tied up by bookies who wanted money. But since Burt was winning so much she couldn’t try that this time, and before you knew it the whole family was gambling – on little kids footraces! Sabrina stepped in, making the whole Chance family think they’d missed the play she’d written about Hilary Clinton that was starring baby Hope in a hilarious wig. It worked, even though Virginia did realize Sabrina had tricked them.

Overall I thought the episode was funny – what did you guys think?