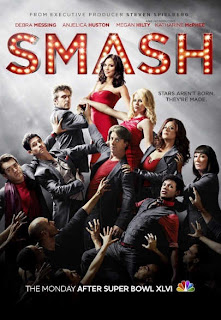 So I finally got around to watching Smash last night (it premieres tonight on NBC, but has been available for a while via The Interwebs), because my plan to feast on chicken wings, nachos, mozza sticks and other deliciously unhealthy food while watching Puppy Bowl was foiled when I realized I do not subscribe to Animal Planet.

So anyway, I ended up watching Smash. Now, I think Smash will generally be a divisive show, much like Glee was before even people who love Glee began to hate Glee. So before reviewing the pilot, here’s a quick guide to whether Smash is for you: 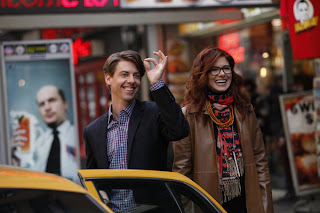 OK, so if you’ve made it past those red flags, watch Smash. While the fourth red flag bothered me a little, I did quite enjoy the pilot.

Debra Messing and Christian Borle play Julia and Tom, a musical-writing team in New York. They get the idea for a Marilyn Monroe musical from Tom’s new assistant, and despite the fact that Julia is supposed to be on a break (so she can adopt a baby with her weary, put-upon husband) they begin to develop the show. 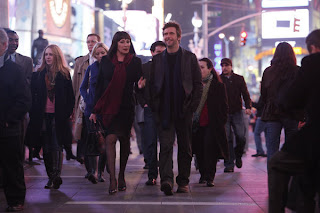 Enter Anjelica Huston as Eileen, the rich producer going through a very public divorce, and Jack Davenport as Derek, the womanizing director. Overall, I thought everyone put in good performances in the pilot, although there were a few flaws.

Julia’s marriage to her husband Frank feels a tad contrived. He really expected his wife to take a YEAR off work so they could focus on the adoption process? And he doesn’t work either? I’m sure theater is very demanding and she never is home when working on a play, but man did he ever feel like a caricature of the husband of a working mother. Yawn. Hopefully, this relationship gets more depth as the series progresses.

The director, Derek, had quite a Black Swan vibe about him, and the arrogant, womanizing director character feels like a bit of a cliche. Also, he’s straight and doesn’t get along with Tom, who’s gay. That’s not exactly a fresh idea.

These are minor quibbles and I really did enjoy the pilot. I cringed the most when the characters got just a tad too passionate about their work – see red flag #4, above. Look, I know theater types are VERY passionate. I’m not an idiot. But when characters are pontificating about how Marilyn Monroe is like a saint, you can’t help but roll your eyes a little. 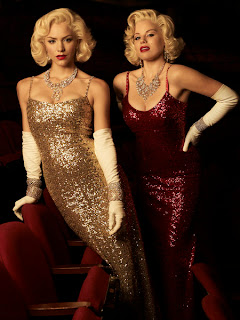 The role of Marilyn quickly comes down to two actresses, played by American Idol alum Katharine McPhee and Broadway starlet Megan Hilty. I knew the show’s challenge would be trying to convince the audience that McPhee’s character Karen deserves the part more than Hilty’s character Ivy, and in the first episode they don’t quite achieve that – but there’s a lot to come.

Karen is fresh off the Greyhound from Iowa, working as a waitress and dating a handsome, successful guy. She’s only 24 and full of innocent optimism. Ivy is more talented – that’s just a fact. She’s been working in the chorus line for years, and is dying for a real role. She looks the part of Marilyn, and Marilyn comes more naturally to her. It’s difficult to understand why the casting panel would consider anyone else.

But the show does give us some reasons. Ivy is too experienced to play young, ingenue Marilyn, they say. In some ways, this is true – although Hilty is only 30 she seems older as Ivy, and although McPhee is 27 she easily plays Karen’s 24 inexperienced years. If they’re going for young, wide-eyed Marilyn than yes, maybe Karen has an edge. The show also quickly positions Karen as the underdog. She rejects Derek’s advances even though it could help her get the role, and previews show that Ivy might not be so…moral. It will be interesting to see whether Ivy is turned into a villainous character, or just a desperate one. Previews also suggest that we’re supposed to be impressed with Karen’s dancing abilities.

I liked what I saw in this first episode of Smash, and I’m excited to see more. I always wished Katharine McPhee would be successful, and this is a much better place for her than the Top 40. She has a good voice, a very good voice, but she’s no Kelly Clarkson. But if you combine her singing abilities with acting and dancing, she becomes a much hotter commodity.

So, have you guys seen Smash yet? Will you watch it tonight?