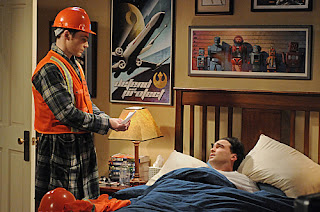 Remember that episode of The Big Bang Theory when we learned why Leonard puts up with Sheldon? Because Sheldon not only saved Leonard’s career, but his life? (At the expense of the elevator.) It was a great episode because it finally answered the question we’d all been asking: “Why are these two friends?”

Well, it turns out that the gratitude Leonard felt over that incident has a limit. And that limit came when Sheldon woke him up in the middle of the night for a safety drill and then demanded to be driven to the dentist the following day. Enter “Clause 209”, a facet of the roommate agreement that would eliminate Sheldon and Leonard’s friendship and reduce them to purely roommates, whose responsibilities to one another only consist of bills, rent and a courteous nod (“sup?”) when they pass each other in the hallway.

With Leonard out of the picture, Sheldon had to face the harsh realization that his friends’ lives do not revolve around him – even Amy declined the opportunity to chauffeur him around. Sheldon couldn’t just admit to Leonard that he is a 30 year-old man who can’t get by on his own, so instead he stages a power outage in an effort to regain his friendship.

Originally, it didn’t look like it would work. Leonard chose wine, bubble wrap and Penny over Sheldon, glowsticks and s’mores – a decision that someone like Sheldon just wouldn’t be able to understand.  Eventually, Leonard’s guilt took over and he went back to the apartment to try and reconcile things with Sheldon. He’d drive him around if Sheldon would just show a little appreciation. Of course, things aren’t that simple in Sheldon’s world, so instead of making a mental note to say “thank you” once in a while or buy his pal the occasional coffee or dinner, Sheldon created “Leonard’s Day”. Leonard would have no extra rights or privileges, but he’d get a card!

Most of the episode focused on the Leonard/Sheldon tiff, but the stuff with Howard and his astronaut nickname was great. “Crash” as a nickname for an astronaut? Raj only associating the name “Buzz” with Toy Story? Finally, Brown Dynamite Raj went to great lengths to plant the “Rocketman” seed in Howard’s fellow astronauts’ minds, but thanks to Mama Wollowitz his nickname will be “Froot Loops”.

What did you guys think of “The Friendship Contraction”?