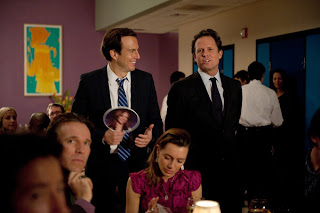 I’ve been watching Up All Night since it debuted in the fall, and it has remained one of my favorite new comedies. (The other is New Girl.) There have been a few ups and downs, but even as the show finds itself I’ve been a fan of the chemistry between Christina Applegate and Will Arnett.

“Preschool Audition” was one of the best episodes I think the show has done. Not only was it a great showcase for the Reagan and Chris relationship that I love so much, but it gave them ways to shine individually and allowed for funny moments from Ava and Missy.

Chris’s brother Casey was coming to visit for the first time in about a year, and Reagan was urging Chris to try and move beyond their typical rivalry and try and form a closer relationship with his brother. I loved seeing Reagan as the more sane one in this situation, because there have been a few episodes where her Type-A personality got a little over the top. When Casey arrived, he and Chris immediately fell back into their one-upping and could only talk about how they’re both “killing it” at work. Only Chris gave up his job as a lawyer to stay home with Amy and, as Reagan soon discovered, Casey had lost his fancy banking job a year ago and was desperately trying to find something new.

Meanwhile, Reagan’s Type-A personality found a place to shine when she volunteered to organize a charity auction for the fancy preschool where she wanted to send Amy. “Little Nudge Academy Preschool” would put their daughter on the fast track to Harvard! Reagan recruited Ava, who was hesitant to take part but couldn’t resist helping out little, adorable Amy.

Ava was allowed to be funny – she showed up to the auction drunk and rambled her way through it – but not in a way that made her annoying or an impediment. I was worried the show would go the predictable route of having Ava ruin Amy’s chances of getting into the preschool, but instead Ava was allowed to speak the truth when it became obvious that the head of the preschool was just interested in what other celebrities Reagan might know. “They’re starf—ers, huh?” Well put, Ava. Reagan realized Amy would be better off at a more normal preschool, where she would be the star attraction.

At the auction, Chris and Casey continued to try and one-up each other by bidding on crazy expensive guitar lessons, until Reagan finally had to take their paddles away and force them to actually speak to one another. It was a simple, sweet resolution to the storyline – the brothers talked and became closer, but still could have a friendly, competitive game of basketball.

So I thought “Preschool Audition” was a great episode – what did you guys think? Here are some other funny bits and quotes: