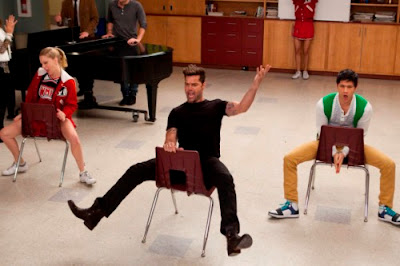 Ese episodio de Glee fue espantoso.
That’s likely not even correct (I took one year of Spanish in high school. I loved it, but it was only available at a school around the corner and that just doesn’t fly during Canadian winters.) but I bet I still know more Spanish than Will Schuester.
On the surface, it seemed like last night’s episode of Glee could have been OK. After receiving complaints about his teaching, Will realized he needed to brush up on his Spanish skills. Enter Ricky Martin, a nighttime Spanish teacher named David Martinez. Born in Ohio to immigrant parents, David worked as a tooth model for many years before becoming a teacher. Now that I’d actually believe.
However, the whole episode was more painful than entertaining. So let’s talk about the elephant in the room.
SUE SYLVESTER ASKED HIGH SCHOOL BOYS FOR THEIR SPERM??? 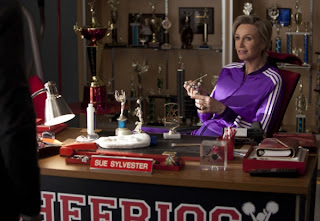 I’m sorry, but is Glee just actively trying to make us uncomfortable now? That’s so inappropriate! And even more offensive was the fact that it wasn’t even a little funny! Look, Glee, you can be ridiculous if you’re also going to be tongue-in-cheek and humorous, but you can’t be so goddamn earnest about these ludicrous plotlines! Just because the kids on your show are all pushing 30 in real life doesn’t mean you can keep pretending these storylines involving adults aren’t creepy. Puck sleeping with Shelby, Finn acting as Will’s best man, and now this? Is there no limit to what the show will do? Ewwww!
After committing what I would consider a fireable offense by asking teenagers for sperm, Sue got less creepy but still inappropriate by asking Will for his. Obviously, that didn’t sit well with Will’s fiancee Emma.
And really, am I really supposed to believe that everyone thinks it’s a great idea for Sue to have a baby? How old is she supposed to be? Jane Lynch is 51 years old, so Sue should be somewhere in that realm. “With whose vagina?” jokes aside, are we really supposed to believe that this is a thing?
There’s also a problem with the way Sue has been depicted. She’s a villain, but she cared about her sister and she cares about Becky. But she still treats plenty of kids like crap. That’s not exactly Mom of the Year type stuff.
Livin La Glee’da Loca
OK, back to Will. Did anyone find his lack of passion for teaching Spanish a little out of the blue? Glee has never been a show that cares about consistency, but back in season one I thought Will really liked teaching Spanish. Now he was just desperate for a tenure position at the school that had opened up – there was no indication that Will even cared about actually passing knowledge on to his students. 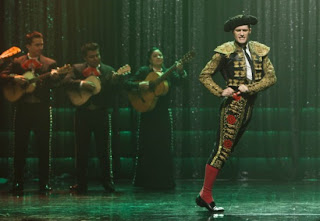 Will had brought David in to teach the glee kids about singing in Spanish, and he sang a bunch of songs. I thought his duet of “La Isla Bonita” with Santana was clearly the best (or only tolerable) song in the episode. When Will took the stage in a ridiculous “authentic matador” costume, it was the last straw for Santana. In what was probably the most realistic moment all season, she tore a strip off Will for perpetuating stereotypes about Latin culture without even realizing that he should be embarrassed about his lack of knowledge. A fair critique? Yes. The right time and place? Certainly not. Santana made an anonymous complaint to Figgins without even talking to Will herself first, which put his livelihood in danger – not to mention how Will losing his job could hurt the glee club she’s in. Then when he tried to rectify the problem, albeit in the wrong way, she stood idly by and judged rather than helping him out. And then when he made an even bigger ass of himself with that performance, she publicly humiliated him. What a gal! I like Santana, but the scene felt too fabricated and forced.
Sue was also trying to get the tenure position, but she was out of the picture once one of the Cheerios filed a complaint against her and the synchronized swimming coach Roz tried to made a play for her job. I actually kind of enjoy NeNe Leakes on this show, but once again the show is lacking too much in consistency. Didn’t Sue and the Cheerios win a bunch of awards pretty recently? It’s not as though Sue hasn’t won an award since the 70s or something, they’ve won things within the past 2-3 years. 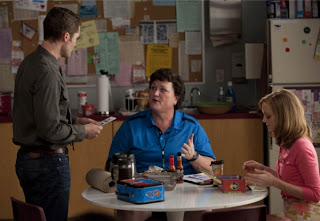 With Will and Sue out of the running, who would get the tenured position at McKinley? Well, that went to one Miss Emma Pillsbury. Will had mocked Emma’s cheesy pamphlets, but according to Coach Bieste they’d been a smashing success at helping football players understand, er…personal hygiene. Will begged Emma to forgive him and congratulated her – this was one storyline that felt like classic Glee to me. Silly, fun, ridiculous, but in a winking kind of way. And it doesn’t hurt that all of Emma’s outfits during the episode were faaaaabulous.
With that, Will decided to take an available job at the school teaching history and arranged for the Spanish teaching job to go to David Martinez. I like the idea of seeing Ricky Martin again, but how does this solve anything? Won’t Will bring the same lack of enthusiasm to history as he did to Spanish? I always believed that Will had a passion for teaching, period. But this episode brought that into question.
She Bangs
OK, onto the rest of the drama that unfolded during “The Spanish Teacher”. I liked the scene with Rachel, Kurt and Mercedes – I’ve always enjoyed that these three are friends, and when Rachel confided in Kurt and Mercedes that Finn had proposed, I was glad they reacted like normal people.
Kurt promised not to say anything, but brotherly concern trumped friendship in this case and he had a nice chat with Finn. Instead of telling Finn that he and Rachel wouldn’t make it, or they were too young, he reminded Finn that he has a lot more going for him than just Rachel. That he deserves more than a lifetime of holding Rachel’s purse.
Meanwhile, Mercedes continued to deal with her simultaneous feelings for Sam and Shane, but the plot didn’t really go anywhere. They sought advice from Emma who recommended they stop texting and talking for a while so Mercedes can figure out her feelings, but then nothing happened. The week was up, and she went for lunch with Shane. Has she chosen Shane? The song she sang almost directly at Sam (while rocking a gorgeous pink top and embellished blazer!) suggested otherwise. I didn’t mind this love triangle at first, but I just want it resolved already.
So that’s the episode. I thought there were a couple bright spots (the stuff with Rachel, Mercedes, Kurt and Finn, as well as multiple Emma Pillsbury appearances) but overall I thought “The Spanish Teacher” was a train wreck. Again. I know it’s probably getting old to hear me complain about Glee (granted, you don’t need to read my reviews, I suppose) but it’s difficult to break up with a show mid-season. I’ll finish watching the rest of this season, but I don’t know if I’ll be a regular viewer in season four. It’s just getting to be too tiresome to hate a show I used to love every week.
What did you guys think? Yes? No? Did Sue creep you out? Tell me what you think in the comments, and check out a list of a few quotes and moments from the episode that stood out to me: