Disc News: Route 66: The Complete Series pulls up in May,

Time to break out the classic Corvette and cruise across America with Tod and Buz with the impending arrival of Route 66: The Complete Series. All four seasons will finally get released at once. No more waiting for installments. It’s all here at a price cheaper than replacing a headlight on your ’65 Vette. The show has had a good following over the years thanks to being an original Nick at Nite title back in the ’80s. Here’s the press release from Shout! Factory: 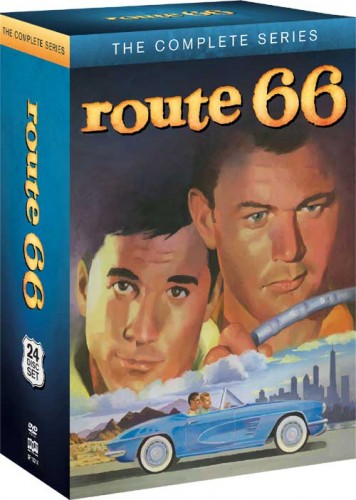 Let’s shift the year 2012 into high gear and take a ride down the famed American highway Route 66 with renowned television classic ROUTE 66. Shout! Factory’s ROUTE 66: THE COMPLETE SERIES 24-DVD box set debuts for the first time on home entertainment shelves everywhere on May 22, 2012. Boasting all 116 original episodes spanning four TV seasons from 1960-1964, ROUTE 66 is one of the most highly rated drama series from the era. Brimming with intriguing characters, smart writing and featuring its timeless Nelson Riddle theme song, ROUTE 66 has endured ever since as a symbol of the original road trip drama. Moreover, this enduring television classic not only immortalized the scenic stretch of American highway, but further established Corvette as the iconic American sports car.

ROUTE 66: THE COMPLETE SERIES contains insightful DVD extras, a special “value add” Great Cars: Corvette DVD – a thrilling, in-depth look at the legendary sports car and more! A perfect Father’s Day gift and a must-have collection for television fans, collectors and vintage car enthusiasts to complete their library, ROUTE 66: THE COMPLETE SERIES 24-DVD has a suggested retail price of $129.99. This DVD box set is now available for preorder at Amazon.com, ShoutFactoryStore.com and other online retailers.

To further celebrate the release of ROUTE 66: THE COMPLETE SERIES, Shout! Factory is offering a FREE collection of ringtone-ready MP3s of the iconic Nelson Riddle theme song at ShoutFactory.com

Yale graduate Tod Stiles (Martin Milner) is an intellectual who has led a privileged and sheltered life. Buz Murdock (George Maharis) is a tough young man, raised in “Hell’s Kitchen,” struggling his entire life just to survive. When his wealthy father dies, Tod finds himself unexpectedly penniless with just one possession, a Chevrolet Corvette. On a quest to find adventure – and themselves – Tod and Buz hit the open road in the ultimate American journey.

Returning from World War II, many soldiers told stories of the loves they’d left behind. or some, it was a mechanical sweetheart — the European sports car. So, the nation was primed for the debut of the 1953 Corvette, a fiberglass two-seater that was the first mass-produced American sports car. The first car was more show than go, but over the years Corvette has evolved from a cute-looking roadster to the menacing Sting Ray, and now to one of the world’s sleekest, sexiest and fastest high-tech sports cars.