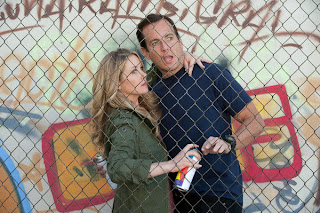 Valentine’s Day is a tough holiday whether you’re single or not, and last night’s episode of Up All Night highlighted the hurdles it can present for couples. If you’re a new couple, you might feel the pressure to make a big deal out of it. If you’ve been together forever, you might feel lousy for not making a big deal out of it. It seems no matter what, you can be setting yourselves up for failure.

Reagan and Chris went the takeout-and-movie-on-the-couch route, but it just wasn’t cutting it. Food that’s mediocre, not great? Come on guys, at least spring for the best takeout possible. And then there was the sex – partially clothed, and in a lazy way, not a passionate way. And then when Ava and Kevin stormed into the house in the midst of a passionate Valentine’s Day quarrel, Reagan and Chris began to long for the days when their relationship was that dramatic.

I think this episode might be the first time I’ve ever related to Ava, but I really, really did. I know what it feels like to be insecure about your cooking, thus you ask “How do you like your meal?” 42 times and expect your dining companion to savor it and compliment you, not shovel it in without looking up. I’ve been there, over and over again. Of course, Ava was too wrapped up in the fact that she thought she was rocking V-Day to realize that her man had had a tough day at work and needed to vent. Sadly, I’ve been Ava in that situation as well.

Reagan and Chris both went out and tried to do crazy things (getting Chris’s name tattooed on her butt; spray-painting Reagan’s name on an overpass) to spice up their love life, but it ended up being a fight over who should get out of the car in the rain that brought the heat back to their relationship.

I don’t want to write too much about this show as I think it loses something if you dissect it to much, but I really enjoyed this episode. It provided a lot of comedy for all the main characters, and there was more physical comedy than usual.

What did y’all think?