I just watched last night’s Raising Hope on my lunch break, and I’m pretty sure I’m gonna want to watch it again on my DVR when I go home. It was that delightful.

The episode was only loosely Valentine’s Day themed. Really, it was about Jimmy and Sabrina’s history together, and how they have finally come together. That’s right, shippers – the moment has arrived! By the end of the episode, Sabrina had dumped Wyatt and was kissing Jimmy. 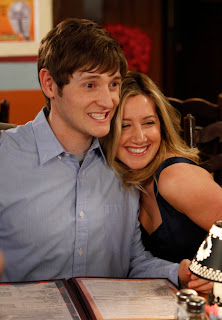 It began with the news that Sabrina and Wyatt were moving in together. )OK, it actually began with Burt and Virginia’s search for a new hobby, which was very funny.) Anyway, that’s not fun to hear if you’re the guy who’s been pining over the gal with the boorish boyfriend for two years. So Virginia decided to “help” Jimmy make Sabrina a little jealous by saying he had a hot new girlfriend.

It worked- Sabrina was definitely jealous. But of course, it quickly spiraled out of control and Jimmy had to get a local improv actress to pretend to be his girlfriend. I was really impressed by how funny Ashley Tisdale was Mary-Louise,
Jimmy’s enthusiastic theater nerd fake girlfriend. In fact, I enjoyed
her so much that I wouldn’t mind seeing her pop up again as part of the Raising Hope universe – especially if Virgina and Burt really stick with their new hobby of improv. 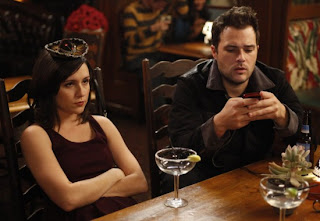 While out on a double date, Mary Louise did everything she could to make Jimmy look great, which in comparison made Wyatt look even worse than he normally would. (And, so the audience wouldn’t feel like we were in a moral grey area here, it was made very clear that Wyatt is not a good boyfriend.) The next day – Valentine’s Day – Sabrina told Jimmy she’d dumped Wyatt.

Jimmy might not be the sharpest knife in the drawer, but he’s smart enough to know that he couldn’t just tell Sabrina the truth, or pretend like he’d also broken up with his girlfriend. I wasn’t really sure what Jimmy had planned when he told Sabrina that his girlfriend had to work and asked her to hang out. But it was so, so amazing.

They went to the improv theater. And hey look! It’s Jimmy’s girlfriend! Performing a play written by Jimmy, all about how he’s been in love with Sabrina since they met. There she was at the grocery store, and in her Robin Hood Halloween costume, and there were Virgina and Burt singing. It was wacky, warm and hilarious – three things Raising Hope epitomizes when it’s at its best.

Sabrina ran out of the theater, but that was a fake-out. She just doesn’t like to kiss in public! Too bad, because the entire improv group joined them in the parking lot as they kissed.

Not only was the episode touching and sweet, but it was downright funny. Plus, there seemed to be an extra dose of adorable Hope moments.

Check out the list below of a few of my favorite quotes and moments, and then head to the comments to tell me what you thought of “Jimmy’s Fake Girlfriend”.