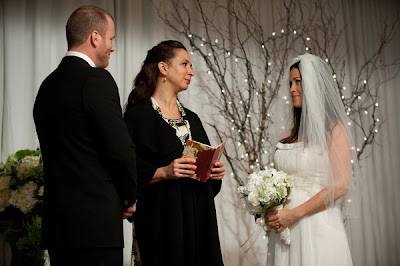 Up All Night was hilarious last night, thanks to Chris and Reagan’s attempt to travel with their baby across the country for a wedding. Originally, they thought the five hour flight would be too much for little Amy. But stubbornness and the fear of becoming people they hate took over, and so they boarded the plan with the baby, a whole lot of luggage, and a plan that went awry from the moment they arrived.

The best part of the episode was that it really highlighted what’s great about Chris and Reagan’s relationship, and that’s been what has made Up All Night special since the series premiered.Reagan took a tough, don’t-ness-with-me approach to navigating the airport, while Chris tried to butter up employees by complimenting their manicures and – major mistake alert – joked about his wife’s control issues. They had a slight tiff over how Reagan always has Chris’s back, even when he’s wrong, and then Chris made everything right by making a touching speech to everyone on the plane and offering to buy them beers. That’s how you travel with a baby, folks – bring lots of money!

There were a lot of great Ava moments too, since she was officiating the wedding. She made poor Missy model a series of hilarious, inappropriate gowns for the big day, and then she had a fight with Kevin over marriage. They both said they never wanted to tie the knot, but of course Ava was lying. Ava’s relationship with Kevin has helped humanize her character, and their promise to “never say never” felt really natural for them as a couple.

The wedding was also quite funny, with Alanis Morrisette guest starring as the other half of the hip-hop duo Ava was in back in the day. They had some lingering issues but managed to put them aside and perform a heavily bleeped version of their hit, “Back It Up (Beep Beep)”.

All in all, I thought it was a hilarious episode. What did you guys think?