This is an uncomfortable review to write. At first, I didn’t mind last night’s episode of Glee, called “On My Way”. I think many of us knew there was always a strong possibility that the writers would go the teen suicide route with Karofsky’s storyline. It’s a very real, very difficult thing, and Glee likes to touch on those issues for better or for worse.

I was watching the episode on DVR, maybe 15 minutes behind everyone else, so at first when I glanced at Twitter I didn’t understand why all the other Glee viewers were so enraged. But as the show progressed they lost me too, which is really a shame since I think they could have executed the Karofsy storyline in a much better way.

Instead of just the usual recap, I’m going to quickly summarize the episode and then talk about some of my problems with it.

Yes, this is really what you missed on Glee: 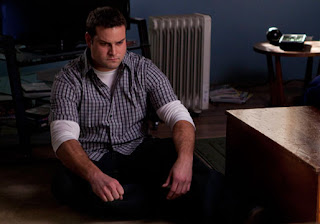 The episode began with a peek into what Karofsky’s life is like now that he was spotted at Breadstix with Kurt. There is bullying. A lot of bullying, at school and online. This is the part of the episode that led me to believe it could be a really good episode. I thought the way Karofsky’s attempt at suicide was depicted was really moving, as it played out while Blaine sang “Cough Syrup” by Young the Giant in the auditorium to Kurt. It’s a great song, and I thought it was a very emotional, devastating scene.In fact, I’m annoyed that the rest of the episode was so dismally delivered, because I think this was one of the best scenes Glee has ever done, and likely ever will do.

We later learned that Karofsky’s dad found him in time to get him to the hospital, where he was recovering. There was some teacher-student discussion about the event, which I’ll get to, and then everyone headed off to Regionals where New Directions beat The Warblers and some creepy choir.

Then Rachel and Finn were to get married, because they’d bumped up their wedding date in a “live in the moment” type way after hearing about Karofsky. As they waited at city hall for Quinn to arrive, they showed Miss Fabray driving on her way there, looking at “WHERE ARE YOU??” texts from Rachel. It was painfully obvious, yet they dragged the moment out. And then, as Quinn sent a text reply to Rachel, BAM – she was hit by a car.

Now, let’s talk about our problems with the episode. Here are mine:

Yes, Mercedes mentioned that people at Karofsky’s school were still being very, very cruel and writing things on his Facebook wall like “Try try again”. But that was a very brief dose of a very harsh reality. What we saw more of was Sebastian, who’d been a jerk to everyone including Karofsky, feeling incredible remorse. I worry that it suggested attempting suicide or killing yourself will make everyone sorry. That it’ll be a lesson for them. This is a terribly dangerous message to send, because guess what? IT WON’T.

Was Sebastian just saying that stuff about Karofsky and taking donations for Lady Gaga’s charity so The Warblers will look good at Regionals? I thought that’s what would happen, but we never saw evidence of that. Not that I noticed, anyway – by that point I may have been too busy ranting.

Similarly, I don’t think Glee should have made Kurt so forgiving. I love Kurt as a character, but the problem with him has always been that the writers turn him into a saint. Now, he’d long forgiven Karofsky so it wasn’t a surprise that he offered his support in the wake of the suicide attempt. And I also believe that Kurt would feel incredibly guilty since he’d turned down Karofsky at Breadstix (for totally appropriate reasons, and in a very polite and kind way) and was ignoring his phone calls. When something bad happens, people often blame themselves even if it wasn’t their fault. If you’d ignored nine phone calls from someone who then committed suicide, you’d feel kind of sick to your stomach about it too.

Yet, I still have a problem with how quickly and easily Kurt forgave Karofsky. Was it the right thing for him to do? Yeah, maybe. It’s incredibly mature and compassionate to be able to look past the bullying inflicted on yourself and see how much pain a person is in. But Kurt is a teenager. A human teenager. It would be more realistic for him to want nothing to do with Karofsky.

The conversation between Kurt and Quinn made me uncomfortable, mostly because it was never again addressed. Quinn was having trouble understanding how Karofsky could get to a place where he’d want to end his own life. I think the idea that “suicide is selfish” is a relatively common one, so I thought a discussion on this could be worthwhile. But instead of a conversation, instead of helping Quinn to have some more compassion, Saint Kurt came in and chastised her from his pulpit.

Kurt told Quinn that all she went through was having a baby in high school and a different hair color for a couple of weeks. That “everyone still loved you.” Weeeeeelll, not quite, Kurt. Quinn was practically excommunicated by her parents. She was kicked out of her own home. She spent most of her pregnancy, the most difficult time of her life, moving from Finn’s house to Puck’s house to Mercedes’ house until her mother finally came around, and left her father. We still don’t know if Quinn has any kind of relationship with her dad or ever will. Kurt has also gone through struggles, but he’s always had an incredibly supportive dad. You cannot compare their suffering, you just can’t. Yet, did Kurt learn that lesson at any point? No.

I don’t know what would have been the appropriate way to address Karofsky’s suicide attempt with his former classmates. I’m not an educator, I don’t know how to handle these things. But was it giving peanut butter to an Irish kid?

Schu’s speech to the kids about looking forward to things, and his own suicidal contemplation in high school all felt so minimizing. The discussion about what Karofsky was battling, about having compassion for someone who had been a bully, about what to do if YOU ever have feelings of hopelessness like he did — that discussion needed to be far more serious than what was actually delivered.

Since I just delivered a mini-rant on how you can’t compare one person’s suffering to another, I do not want to say that Schu’s story about he contemplated suicide in high school because he was caught cheating felt small. Because that’s not actually what I think. What I think is that Schu’s story would have been a hell of a lot more moving if we knew anything about his parents. Are they really strict? Is he constantly afraid of disappointing them? What was his childhood like? There was no context or background to make Schu’s story more realistic or emotional, so the scene just fell flat.

4. Song choices MUST be the right tone when delivering an episode like this

I think my biggest problem with this episode was that it had an inconsistent tone. When they showed Karofsky putting on a suit in preparation to hang himself as Blaine sang “Cough Syrup”, that was the right tone. That scene had me in tears.

Then we got to Regionals, and the tone drastically shifted. The Warblers’ performances were just bland, vanilla, and overly peppy for the mood of the episode. New Directions took it to an even more inappropriate level. 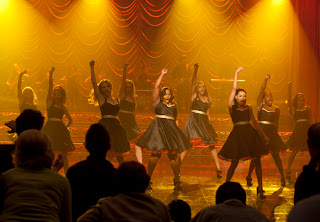 First of all, RAPPING? You’re going to RAP at Regionals? Suicide aside, this was stupid. And the song, a mash up of Fly by Nicki Minaj ft. Rihanna and I Believe I Can Fly by R. Kelly was just too upbeat for this episode. The writers never should have put Karofsky’s storyline and Regionals in the same episode.

And then, there is the kicker – the former Troubletones’ performance of “Stronger” by Kelly Clarkson. When I saw this performance on YouTube on Tuesday afternoon, I loved it. But that was before I saw the episode. Singing “what doesn’t kill me makes me stronger” in the context of a guy who tried to kill himself is just incredibly inappropriate. Especially when you’re doing it with cheeky dance moves.

5. One lesson per episode, please 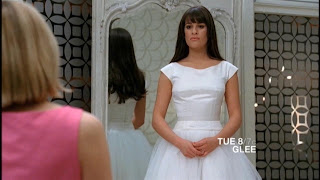 Speaking of inconsistent tone, ending the episode with Rachel and Finn’s wedding also felt very strange. It’s not like Karofsky almost died accidentally, and thus they were inspired to live in the moment. Their decision to move up their wedding date felt very strange. 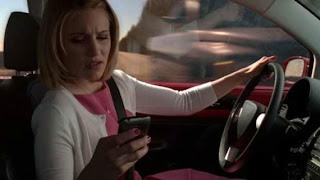 And then Quinn happened, and we all saw it coming. I’m not going to say people should text and drive – if Oprah says it’s dangerous then it is, you know? But this was one lesson too many for one episode. And did anyone else feel like this was just because Dianna Agron couldn’t take being given such terrible, inconsistent material any longer? Quinn may not be dead, she could very easily remain on the show, but I’m kind of wishing she is killed off, just so Dianna Agron can go on to bigger and better things. And, obviously, they needed a way to postpone the wedding that I don’t think will actually happen.

Now we’re left with this stupid cliffhanger, which feels much more like a way to keep people thinking about Glee while it’s on hiatus than a legitimate creative decision.

Other things that were weird or notable:

So, Sue is pregnant now? I felt like this needed more explanation than the way it was just slipped in to an already overcrowded episode. I did like that she acknowledged that she could have done more to help Karofsky, where as Figgins took the rather inexcusable position that it “wasn’t our job to know” that Karofsky was having such desperate problems. I also like the idea of Sue helping Will and New Directions win Nationals, because I think at this point her role as villain in the Glee universe has been played out.

I know I said I didn’t think Kurt realistically would have forgiven Karofsky so quickly, but he did and we were already there. So given that those two had already made peace, I liked the scene where Kurt encouraged Karofsky to imagine a life outside of Lima, ten years in the future. It was painful and beautiful, and another small, interesting moment that was overshadowed by other ridiculous things.

Did the writers seriously have Sebastian say “It’s all fun and games…” without having him also say “until someone LOSES AN EYE???”

Brittany wants “Lord Tubbington to kick his ecstasy addiction.” That was cute.

So…all those extra girls who were part of the Troubletones came back to dance for that performance, but still aren’t in New Directions and have never been acknowledged?

OK, now it’s your turn. Head to the comments and tell me why you did or didn’t like this episode, if you’ll ever watch it again, if you even liked the first scene, etc. Like many of you, I’m mad at this show, but I will watch the last eight episodes of the season. After that, I don’t know.