I think it’s time I admit what I’ve always known: This season of The Bachelor is a dud. In fact, it’s so boring that I’m almost thankful Courtney is on the show, because without her the season would have been a complete snooze. Ben is nice enough, but boring. If I hear him say “open up” one more time I’m going to lose it. I think the editors have removed all of the goofy, fun aspects of his persona and have only left in the boring, let’s-talk-about-our-feelings moments, which I hate. As for the four women Ben visited in their hometowns this week, well, they’re all a little boring too. 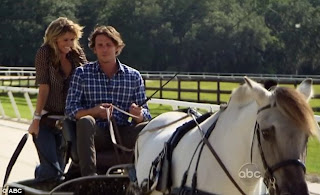 First, Ben traveled to Florida to spend some time with Lindzi, her parents, and their animals. Obviously, the first part of Lindzi’s date with Ben involved horses. And a carriages. (What was up with that white horse and his stumpy little legs? Is that a special kind of horse?)

Over a picnic, Lindzi told Ben more about her past relationship, how they lived together and she thought she’d marry him, and how the breakup was really hard on her parents. It’s basically Nicki’s narrative, minus the marriage/divorce. Ben, of course, was glad Nicki was – say it with me, folks! – OPENING UP. (Everybody drink! No wait – you’d be in a coma by the end of the episode.)

While relaxing in the backyard at Lindzi’s parents’ mansion – OK, I’m gonna finish that thought, but hold up. Everyone on this show always has a huge, gorgeous house! It’s insane! My theory is that only rich girls can afford to not work for six weeks so they can go on a “journey” to “find love”. OK, so back to Ben and Lindzi and her parents. They discovered that Lindzi’s parents had gotten married in the San Francisco city hall, where Ben and Lindzi had their first date, and instead of taking that as some Kristen Wiig on SNL style bragging, they took it as a sign. How sweet.

Later they all had a carriage race, there were some s’mores, and it was overall a cute date. Lindzi seems nice. 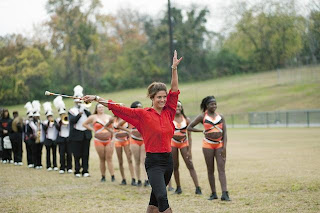 Next Ben hit the road for Tennessee, where Kacie greeted him with…a high school marching band and a baton twirling performance? Oh, honey, no. The baton twirling might have been cute when it was impromptu, but here it was just immature and a little creepy.

Kacie told Ben a little about her family, and he spent a lot of time freaking out. Her dad doesn’t drink, she told him. “BUT I MAKE WINE!!!!” he panicked. Yikes. Is that a big deal? It was like she said “My dad doesn’t do crack,” and he was all “But giiiiiirl, I’m a drug dealer! How will we get along?”

Kacie then brought Ben to meet her parents and her sister. They hung out for a while, and then Kacie pulled her sister aside so she could blurt out “That’s my future husband in there!” Do we think it was all the poor sister could do not to laugh? Meanwhile, Ben struggled to connect with Kacie’s parents. He could barely get a response out of her dad, who eventually told him to let Kacie know if she’s not the one, and then Kacie’s mom only wanted to talk about how every season of The Bachelor ends with some wide-eyed innocent moving across the country to live in sin with a man. I guess no one had the heart to tell her that The Bachelor usually ends with two fame whores agreeing to marry one another only to break up six months later and go on a series of obnoxious he-said/she-said media interviews.

When the date was over, I knew either Nicki or Courtney would have to screw up pretty badly to manage to get eliminated. The Kacie date had not gone well. 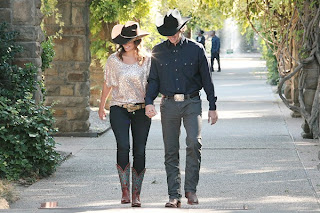 Next Ben went down to Dillon, Texas to visit Nicki. They walked around and Nicki dressed him up like a cowboy in a funny hat/boots/belt combo that made him look like he’d be better off on my favorite reality TV dating how, Sweet Home Alabama.

Nicki warned Ben that her parents might have some questions for him since before, when she got married, they didn’t voice any of their concerns. And we all know how that ended! For this segment of the show, please drink when someone says “divorce”. Not only had Nicki gotten divorced, but her parents were too.

After spending what seemed like 30 seconds with Ben, Nicki’s mom told her “I’m so happy for you!” as her daughter gushed about being in love with a stranger, but her dad was a little more reserved. “I may have too readily given your hand in marriage the first time because I have such complete faith in your judgment. I think I could have maybe asked a few more questions… I’m sorry if I let you down.” Oh. Genuine feelings. We see these so rarely on The Bachelor, I wasn’t sure how to react. I think I was…sad? Yes, I definitely felt sad. I don’t want Ben to pick Nicki, she’s too good for this show!

At the end of the date, Nicki told Ben she’s in love with him. Way to one-up Lindzi, Nicki! You’re totally winning.

They Tried To Make Me Go To Rehab

Ben’s final stop was in Arizona, where Courtney was waiting for him – and for the cameras, ready and prepped to do a little image rehab. “I feel disappointed in myself for treating the girls the way I did,” Courtney murmured. Oh, you do not.

Ben joined Courtney, her parents and her sister for lunch, and they discussed him as though he wasn’t there. “I dig him, I really feel like I’m falling for him,” Courtney said. Er, he’s sitting right next to you, and this is awkward.

During the whole visit, I couldn’t get over how fake Courtney sounded around her whole family. She was putting on this demure little baby voice, and it was completely different than what we’ve seen all along. 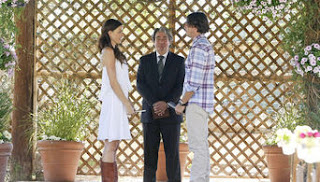 Courtney’s not stupid, and she knew to seal the deal she’d have to say those three magic words to Ben during the hometown date. But why say them privately (or as private as you can get with a bunch of cameras following you around) when you can plan a surprise fake wedding! AKA, the dumbest thing I’ve ever seen! I thought the pretend wedding was stupid when Ashley did it, and I think it’s stupid now.

Completing the cross-country trip, Ben met back up with Chris Harrison in L.A. for the rose ceremony. They spoke a bit about how “tough” and “personal” this is, trying to gloss over the fact that Ben was about to reject a girl and her family.

It went down the way I knew it would go down. Courtney, followed by Lindzi, followed by Nicki. Sorry Kacie, no rose for you! Before these dates, I would have guessed that Ben would eliminate Nicki this week. But they had a really great hometown date, while Ben’s date with Kacie just showed him that not only would he not fit in with her family, he didn’t want to take her to California, away from her family, her life, and everything she knows. It was the right move, if there is such a thing on this show. 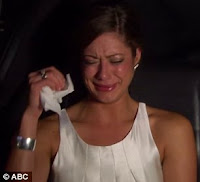 Kacie, of course, was crushed. “I knew that this was coming and I’m so upset. Why am I not good enough? Like, I don’t get it… What the f— happened?” Oh man. I can’t be the only person hoping that this heartbreak doesn’t cause an eating disorder relapse, right?

So, what did you guys think? Surprised? Not so surprised? Let me know in the comments, and I’ll see you next week when Ben takes his remaining three girlfriends to Switzerland!