Last night I went to a local party hosted by fellow Halifax bloggers Fashionable People, Questionable Things to watch the Oscars. Normally we’d all be snarking about the fashions (check out my best and worst dressed lists) and the shows from the comforts of our homes, via Twitter and live blog, but instead we sat side by side, eating cupcakes and drinking boxed wine, still communicating via Twitter and live blog. 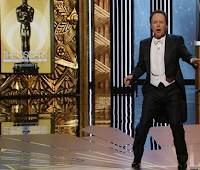 I was one of the few there who was actually happy Billy Crystal was hosting the Oscars. I just enjoy him, his video montages, and his cheesy songs. And even though there were definitely some awkward moments in last night’s telecast (don’t make fun of Christopher Plummer being old, OK, because he’s Captain Von Trapp and he will kick your ass, Billy Crystal!) overall I thought he did a decent job. Unfortunately, the show itself was still kind of a snooze.

Had I been playing “Drink every time we celebrate the movie industry”, I would not have made it home last night. Look, I know the Oscars are a tribute to the movies. I know that it is a night where people who make movies get together and celebrate one another. I know this. But could their celebrations be, you know, a little more focused? Every single thing they did was just an homage To The Movies! It became tiresome.

Of course, this is fitting since the two frontrunners for Best Picture – The Artist and Hugo – were both about how great movies are, and the golden age of cinema, and how wonderful the film industry is. And I liked both movies, it can just become a bit much, you know?

Now, as for the awards, most of them came out as expected but there were some surprises. Here’s a full list of the nominees and winners. For my own predictions (which I put together on the fly on Saturday evening thanks to having seen seven of the nine movies nominated for Best Picture and some quick Internet research) I got 17 of 24 categories correct. Of the main categories (Best picture, acting, directing, writing) I only got one wrong – I predicted a win for Viola Davis, but it went to Meryl Streep instead. That was one of the few categories all night that could have gone more than one way. All in all, The Artist won big. 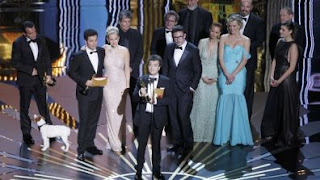 I’m happy with that result, because I really liked The Artist. This year, there weren’t a lot of nominated movies I loved. I really liked George Clooney in The Ides of March, but I wasn’t a huge fan of The Descendants. I thought Moneyball was OK, but nothing special. I thought The Help was a very well acted Lifetime TV Movie. I HATED War Horse. I can’t tell you how much I hated it. And as for The Tree of Life and Extremely Loud and Incredibly Close well, the odds are that I’ll never see them.

What did you guys think of the telecast? The winners?

More stray thoughts on the Oscars: