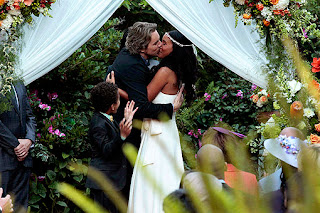 It’s so unfair that the third season of Parenthood is over now, isn’t it? I’m terribly mad at NBC for only ordering 18 episodes, and I can’t believe we won’t see anything new from the Bravermans until fall. (I am very confident it will be renewed. They wouldn’t dare break my heart like that and really, what else does NBC have going for it?)

In true Parenthood fashion, even though things didn’t necessarily happen as I’d hoped, I still managed to love what happened. I wasn’t ever really rooting for Crosby and Jasmine to get back together, yet that wedding – and the reactions of their families to the surprising news – was completely heartwarming. I’ve been saying all season that it would be a mistake to have Zoey change her mind about the baby, yet I’m on board with this new storyline. And even though I have so many questions about Jason Ritter’s future on Parenthood, I was really damn glad to see him show up at the wedding for Sarah. So let’s talk about all this in more detail, shall we?

I don’t think there could have been a better way to bid adieu to Dr. Joe and Lily than through wordless montage. As much as I enjoyed both of these characters as partners for Jasmine and Crosby, once the two of them made the decision to be together I wanted to get on with that as quickly as possible. We didn’t need words to understand how they’d react. Lily, the passionate musician, was angry. (Wouldn’t you be?) Joe, the too good to be true doctor, was kind and understanding. Um, if you don’t want him Jasmine, you can send him my way…

There was one damper on the whole thing though, an issue that bubbled over into a hilarious fight between Crosby and Adam in front of their whole family. Adam told Crosby he’d met behind his back about selling the Luncheonette and told him he wanted to take the new offer. Crosby was so hurt and betrayed that he replaced Adam as his best man, filling the role instead with his buddy Billy Riggins.

OK, so that guy wasn’t Billy Riggins. But he was played by the same guy, his name was also Billy, and other than not being Texan or married to Mindy, it was the same character. I’m curious if other FNL/Parenthood fans will have a problem with this almost-crossover. Personally, I find it delightful – like a special little treat for fans of both shows.

I also want to make it clear that I think Adam started that fight – he splashed beer in Crosby’s face, which ignited the whole thing. I agree with Max, he should have had a consequence!

Others tried to talk some sense into the brothers. Zeek didn’t have much luck with Adam, but Jasmine managed to make Crosby understand that Adam will never feel about the Luncheonette the way Crosby does. It’s a business to Adam, and the right business decision was to sell. But for Crosby, it’s a dream and you can’t put a price on that. You could hand Crosby ten million bucks, and what would he want to do? He’d want to buy the Luncheonette back. So I felt like it showed major maturity in Crosby when he decided to tell Adam to go ahead with the deal. That’s a grown up Crosby, a different guy than we met back in season one.

The wedding itself was beautiful. Jasmine looked amazing, and it felt so perfect and natural that it be held in the Bravermans’ gorgeous backyard. When it came time for the speeches, Billy was incapacitated and Adam took his rightful place at the mic. He made a nice speech and then ripped up the napkin with the 2million+ offer on it. That seemed a little unlikely to me, but it was nice to see Adam acknowledge how much it means to go to work with your brother every day. Too bad he’d already told Haddie not to worry about Cornell tuition, huh?

There was a lot more going on in this episode than the wedding, though. First of all, Drew lost his virginity. I don’t have much to say on this other than it was a sweet moment between the Drew and Amy, I hope they used protection (I think there was some mention of “getting stuff”?) and I wish he’d taken his socks off. But in a way I don’t, because leaving his socks on felt more realistic and less fairytale-like.

Meanwhile, Bob Little tried to bury the hatchet with Kristina after the whole Amber mess. I wasn’t sure what to think about Bob Little for a long time, but I’ve come off the fence and onto the side of liking him. He’s a nice guy, a well-intentioned guy, and ultimately he and Amber are adults. I still don’t love the age difference, but I don’t think he ever meant to take advantage of her. I think he really cares about her.

Amber had to make a choice, and it was nice to see the season end with her making an adult decision rather than running away from home or getting hit by a car. This season was big for Amber. She was no longer in high school, she moved out onto her own and got a job. She’s a lot more mature than most nineteen year-olds now, which is part of why her relationship with Bob doesn’t bother me anymore. But Amber realized that she makes so many decisions based on emotion, and this time she needed to make one based on her future and what’s best for her. She didn’t feel like she could be with Bob and work for him, so she asked if she could still work for him. It was a heartbreaking scene and more fantastic work from Mae Whitman, and I think anyone who’s been watching Parenthood from the start probably couldn’t help but feel proud of Amber, a fictional character. That’s what Parenthood does, it makes you care about this make-believe people. I wouldn’t mind if, after the election has been won, we revisited a relationship between Amber and Bob.

Then there’s Sarah and Mark. I’ve mentioned before that the difficulty for me in becoming invested in their relationship is that I’ve been unable to avoid reading news about other projects Jason Ritter is working on. His future on Parenthood is uncertain, and it’s hard to ignore that when it comes to Mark and Sarah’s relationship.

Both of these characters have been all over the map lately. First Mark wanted a baby, and Sarah was on board. Then it seemed like Mark was questioning the choice, what with all his talk of travel and moving to New York. Now Sarah is not only troubled by concerns that she won’t be able to have a baby, but concerns that she actually doesn’t want a baby. Her conversation with Mark was very reminiscent of a recent How I Met Your Mother storyline, and the same sentiment was expressed. If one person doesn’t want kids and the other might, no one wants to be the thing holding someone else back from being a parent. Mark said he was OK not having kids, but Sarah doesn’t want him to resent her in ten years if he changes his mind. So she ended things with him.

It was obvious that Sarah was heartbroken, but I honestly thought that’s where we were leaving things with her for the season. But then Mark showed up at the wedding reception and not only declared that he loves her and wants to be with her, but he proposed! Gah! Now I really have no idea what will become of these two. I’d like to see Jason Ritter stay on this show and I’d like to see Mark and Sarah tie the knot. But will they?

I was disappointed that the Zoey storyline ended with her choosing to keep the baby, although I understand that it’s a very real possibility for a couple going through the adoption process. It really puts them through the ringer, and luckily Julia and Joel’s relationship has always been so solid that they came out of the experience stronger and more determined to add to their family. And I have to admit, the moment when Zoey told Julia that she’d changed her life was rather touching.

Julia and Joel decided to go back to the adoption agency and take away any limitations they’d previously had – race, gender, etc., none of it mattered anymore. They just wanted a baby. Then the adoption agent asked them about “sky babies” – babies who are born to mothers who have no prior adoption plans. Even though there’s still a risk that the mother could take the baby back, Julia and Joel said they were open to that option.

So as I’m guessing most of you were, I was shocked when Joel and Julia got a call during the wedding reception and hurried home to greet…a little boy? Wait, what? The term was sky baby – when did Julia and Joel say they were also open to becoming foster parents? Were they expecting a baby? They didn’t seem all that surprised, and a seven year-old (or whatever, I don’t know how old the kid was) isn’t something you just spring on people. It’s a very noble thing, to take in a child in need of a home, it just felt like it came out of nowhere. It’s an interesting storyline for Julia and Joel, it’s just not the same as adopting a baby. I felt a little cheated, since we were never let in on the news that Julia and Joel had decided they were open to trying to adopt an older child.

Stray thoughts on “My Brother’s Wedding”: