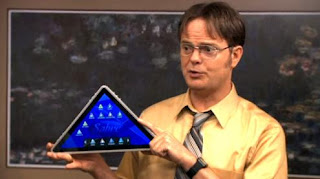 It’s surely no coincidence that an episode of The Office that I finally like was written by Mindy Kaling, who basically writes all my favorite episodes. “Test The Store” had two clear storylines and I found both of them to be pretty funny, even if I’m still not sold on the idea of have the characters being in Florida for a while.

In Scranton, Andy was clocked by a chubby fifth-grade girl who’d thrown a pine cone at Pam. Obviously, that was too humiliating a story to tell, so Andy and Pam embellished it by turning children on bicycles into a gang of bikers. Of course, that charade could only go on for so long, and when the mother came in with her bratty kid to apologize the truth was revealed.

I felt like this storyline had some great Pam moments, especially when the bratty kid called her fat. And of course, putting Toby front and center to teach self defense skills to the rest of the office is never a bad idea. I just felt like overall this story worked, and delivered some really funny little moments. You had to laugh when poor Andy ended up with a second black eye, thanks to Kelly’s elbow.

I think in order to enjoy the whole Tallahassee thing, at least somewhat, you need to just accept the fact that triangle-shaped smartphones and tablets are incredibly stupid. That’s the point, after all – no one in the writers’ room of The Office thinks Sabre is selling good products. This is a project meant to fail. So I did get a pretty big laugh out of seeing the Sabre store all set up.

This season of The Office hasn’t been good, but I think everyone can agree that Ellie Kemper has knocked her material out of the park. She’s shone all season and, I think, will soon outgrow this show the way Mindy Kaling did. Seeing Erin disguised as a hipster was just incredibly funny, from her outfit, to her dancing in front of the homeless people, to her reading hipster factoids about Zooey Deschanel and Coachella off of cue cards. Pure gold. And I think if you’re a fan of The Mary Tyler Moore Show, you had to feel some delight when she befriended an elderly Georgette.

Ryan cracked under the pressure of having to deliver a big speech, and Dwight made Jim step in. Dwight may be crazy, but he knows he’s not the right face to represent a product. I liked seeing Jim react to succeeding at something he knew was inherently ridiculous. It was a great mixture of pride, disbelief, excitement and embarrassment.

What did you guys think of the episode? Enough funny moments to save it, or are you just over this season — or this show?

Here’s some other things about “Test The Store” that I enjoyed: