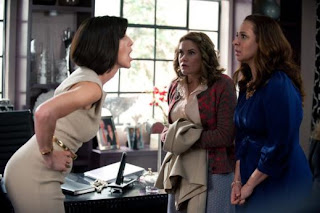 So, Kevin’s gone? On last night’s episode of Up All Night we discovered that Ava’s blue-collar boyfriend Kevin – the one she was only recently vaguely discussing marriage with – had moved to Idaho. His house was for sale and everything. I understand that Jason Lee probably had other commitments and wasn’t a series regular on the show, but this change just felt so out of left field that I was distracted throughout the episode.

Up All Night has been on a run of great episodes, but “New Boss” just wasn’t my favorite. I had high hopes when I saw that Eve Best, who I LOVE on Nurse Jackie was guest starring, but she was out of the episode so quickly I felt cheated. She played a business idol of Reagan’s who’d acquired the show. Reagan and Ava were completely in awe of her, but she quickly abandoned them and left an Iraq war vet, her right-hand man Luke, in her place.

It was just a lot of change for one episode, you know?

I did enjoy the B-plot though, which saw Chris and his pal Reed (Will Forte) try to prove their manliness by rebuilding an old motorcycle that had belonged to Reed’s late uncle Wolf. They had no clue what to do (besides go buy leather outfits) and ended up getting help from the unlikeliest of sources, their uncool neighbor Gene. Once the bike was working no one had the guts to ride it…until Chris found out that Reagan’s new boss had made her cry, and he was overcome with a surge of protective manliness.

The episode did end on a couple of high notes – I loved the idea that post-confrontation, Chris no longer had the adrenaline needed to actually ride the motorcycle home, and watching Ava pour one out on Kevin’s lawn was pretty damn funny. “New Boss” wasn’t a terrible episode, but it wasn’t up to recent Up All Night standards if you ask me.