Well that was quite an episode, wasn’t it? On Friday night, CMT aired another new two-hour episode of Sweet Home Alabama. With Paige down to just five guys it was obvious that things would start to get serious, but Landon went to an unexpected extreme. So let’s talk about the episode!

The way to a woman’s heart…

Paige’s first date this week was with Bubba, a guy who’s been seen as a frontrunner from early on in the season. As my boyfriend Rob said as we watched the show, “If you look up ‘too good to be true’ in the dictionary, Bubba’s picture is there.” I mean, seriously, is there anything negative about Bubba? He’s a cowboy, he cooks, he’s incredibly nice. He never says a bad word about anyone. It’s incredible.

Bubba kicked off his date by taking Paige shopping for cowboy boots and a hat. Someone has been paying attention! Paige loves cowboy boots, so this date was right up her alley. See, city boys? You don’t need to take her to some fancy store to try on expensive diamonds she won’t be able to keep. Just buy her a cute pair of boots!

Bubba’s plan was to cook lunch for Paige at a local Southern mansion he (or the show) had rented. The property was gorgeous and I loved that Bubba himself went shopping for the food and cooked everything. We’re not in the 1950s anymore, so it’s nice to see a guy who can cook! It was nice to hear Bubba talk to Paige about the house he’s built – he obviously is very proud of his work, and he just seems like such a genuine, goodhearted gentleman.

Paige is obviously smitten with Bubba, and I stand by my prediction that we’ll see him and Jeremiah in the final two. But the sparks don’t seem to fly as much between Paige and Bubba as they do with Jeremiah, or even in a way Big Shaun. Bubba’s a great guy and I wouldn’t mind seeing him as the next Sweet Home Alabama star, but I don’t see Paige ending up with him. 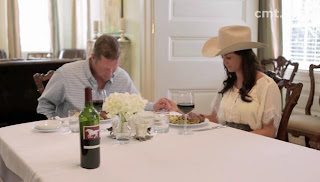 The other guys were obviously a little jealous when Bubba described his date, because they know he’s major competition. As Jeremiah said, it’s a double-edged sword. He likes Bubba, Bubba is a great guy, and I think ultimately most of these guys just want Paige to end up with someone who will make her happy. I think every guy in the house knows that Bubba would treat Paige, or any woman, very well. But that’s also not really a guy you want to be competing against.

I did notice though, that the only guy who doesn’t have kind things to say like that is Landon. Landon always turns the conversation back to himself. You never hear him say that someone else is a good guy, or would treat Paige well if she chose him. Instead he’s all complaints, and I thought it was weak of him to say Bubba had an advantage because he’s from Alabama. So what? He’s from hours outside of where they’re staying, so it’s not like he took Paige back to his house. And from the way he talked about saving up to build his house, it doesn’t sound like he’s rolling in cash and uses his wealth to plan out fantastic dates either. Bubba is just thoughtful – any guy could have taken Paige on a date like that, but Bubba’s the one who thought of it.

Oh Landon, Landon, Landon. It’s not that I think Landon is a bad guy. He’s not my kind of guy, and I don’t think he’s the right fit for Paige, but he doesn’t come across like a bad guy. But he’s so intense! You can’t help but think that all his moves come out of desperation rather than true love.

When Landon ratted out Jeremy, he thought he was being sent home. Now, that’s not to say that I don’t think he was also being protective, or that he shouldn’t have done it. We don’t know what exactly Jeremy said, so we’ll never know just how justified Landon was. I think the fact that all the other guys, even Bubba, looked down on that move says something, but regardless, we’ll never know if Landon over-exaggerated or misconstrued what Jeremy said. But since he said it when he was about to get sent home, it came across as a desperate attempt to stick around. It’s not like he’s a fame whore and wanted to just stay on the show – I think he wanted to stay because he was really into Paige, but it was still desperate.

I think the competitive spirit of a show like this has caused Landon to build his feelings for Paige up into an intense frenzy of desperation. After all, how well does he really know her? I don’t know that he’d be acting this way if he and Paige were just dating in the real world. 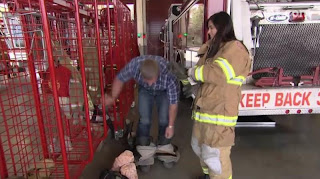 For their date, Landon took Paige to the local fire department so he could demonstrate what he does as a paramedic. I have a lot of respect for people who risk their lives to save others, so I won’t make fun of this too much. But…he went a little overboard with all the gear, don’t you think? At one point he said Paige looked so hot that she should just wear firefighter gear around the house. Um…yeah. That was sort of weird. 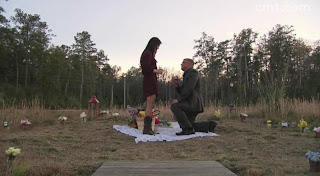 Later, Paige met Landon at a local lake for a picnic – only I’m not sure they even had a chance to sit down. Landon was all dressed up in a suit, and before you knew it the guy was down on one knee. He said he knew she couldn’t answer now — no kidding, fella! She’s still dating four other dudes! Look, I don’t want to bash Landon for putting his heart on the line. But did he really think this would work out? This was only their second date! They’ve barely kissed! SHE HASN’T EVEN MET HIS DAUGHTER.

Also, where did the ring come from? It was pretty big. Did he buy that in Alabama? Did he buy it in Texas and bring it to the show just in case? Did he buy it for his baby mama and it’s a recycled ring? 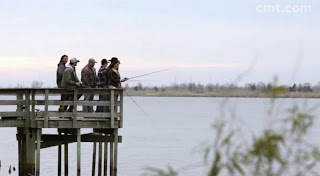 The next day, Paige met up with all the guys to go fishing. I was really hoping that Jeremiah would pull her aside to talk, but he decided the timing wasn’t right. Jeremiah! He seems like such a nice guy, but he’s kind of blowing this. Luckily, it looks like Paige is pretty patient. If she hasn’t sent him home yet, I don’t think she will.

Landon was noticeably uneasy and quiet during the date, what with the proposal hanging in the air and everything. Paige didn’t say anything, and she could tell he hadn’t mentioned it to the guys. The group date was a little tense at times, but it seemed like there was a lot of laughter as well.

Going into elimination, I was pretty sure Paige would be letting Landon down. A proposal was such a huge step, and even if that’s something Paige said she wanted in the future it was way too rushed. Landon should have considered that Paige would have feelings for the other guys that need to be resolved before getting engaged, might want to get to know his family first, might want him to meet her family, etc. If he’d been thinking clearly, I think he would have realized Paige’s feelings for him weren’t on the same level as his feelings for her and that he’d need to exercise patience. But Landon is Landon, and it seemed as though he was too wrapped up in his own excitement to see that.

You had to feel bad for Paige as she let Landon go. Breaking up with someone and hurting their feelings is incredibly difficult no matter what, so I can’t even imagine how that would feel with a proposal thrown into the mix. She tried to let him down as gently as possibly but Landon was obviously crushed, and Paige was physically trembling as she said goodbye.

Of course, when Landon told the guys that he’d proposed most of them reacted like I did – they couldn’t believe someone would pop the question on the second date. Bubba put a stop to it, because Bubba is a saint.

When Paige let Landon go she said she didn’t know why she can’t want
what’s good for her, but ultimately I don’t think that’s going to be
true. Landon wouldn’t have been the right choice for Paige, I don’t
think they ever had as deep of a connection as she’s had with the other
guys. Was she referencing her feelings for Jeremiah? At this point, he
hasn’t reciprocated to her yet – but I think viewers know that he does
really care about her. Jeremiah is having a hard time with being on the
show, but I think in the real world he’d be a good choice for Paige – a
better choice than someone like Landon.

Sweet Home Alabama is taking a week off, and when it returns on March 16th Paige will have to go from four guys to the final two. Does it seem inevitable that The Shauns will be eliminated? Now get to the comments and tell me what you thought of the episode – you know you want to!