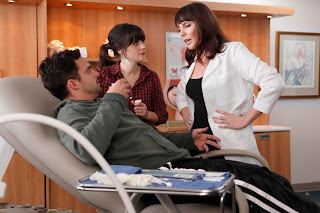 Sometimes when someone has a health scare, it makes you ask big questions. You know, things like “Have I done anything with my life?” and “Am I a good person?” and “What have I accomplished?” I wouldn’t know anything about this, of course – my excellent – OK fine, adequate – physical health allows me to continue to live in an imaginary bubble of grossly high self-esteem where blogging about TV is an important and meaningful way to spend one’s life. Blog > Baby, yes? (Shut up and just let me believe that until the next time my hand cramps and I have to think about a life without typing, OK?)

On this week’s episode of New Girl, Nick began with a back injury thanks to Jess and ended up with a cancer scare thanks to a mysterious lump in his neck. There was so much to love about this storyline, from the fact that Nick was taking pain meds meant for severe menstrual cramps for his back, to the hilarity of everyone getting incredibly drunk, to the surprisingly honest and touching moments near the end.

News that Nick might have cancer spread within the group, and by that night they were all staring at him mournfully while he worked at the bar. Everyone except CeCe, who just ordered her drink. Schmidt kept trying to kiss Nick on the lips, which never went over well. Everyone stayed past closing time, singing and rapping – that was possibly one of the best scenes this show has ever done, or ever will do. CeCe can rap! Winston can sing in a really weird voice! Nick can get really into it, realize he can’t sing, and clap along instead!

Jess killed the moment, though, when she chimed in with “Nick Miller Nick Miller, never does anything.” OK, her rhyming skills weren’t as good as CeCe’s, but can you blame her? Moments earlier, Nick had harshly told Jess “You don’t know how to be real” just because she was trying to cheer him up. But even Nick himself had to agree – he never does do anything. “If everybody went to the beach and jumped in the water, well I’m the guy that’s guarding the wallets.”

For some reason, I found that insanely poetic. I don’t want to be the guy guarding the wallets, you guys! And neither did Nick anymore, so they drove to the beach. After Nick had his skinny-dipping experience, there were some real moments on the beach. CeCe told Schmidt she’d lost her dad when she was twelve, which Schmidt tried to relate to by mentioning the time his very large cat died. A little bit down the beach, Nick and Jess made amends when Nick admitted he was glad Jess came into his life – of course, they were so drunk he wouldn’t remember the touching moment in the morning.

And Winston spent some quality time with his “car”, a relic of his college days and a piece of machinery so beat up that the mechanic wouldn’t even call it a car anymore. It was a nice way, I think, of symbolizing Winston moving on. When we were introduced to him on the show he was starting a new chapter in his life. He has to learn how to talk to girls now that he’s not a basketball star, he has to get a real job, and he has to let go of a car that no longer fits his lifestyle. When Winston said goodbye to it at the end of the episode, I felt like it was another step in the right direction for his character.

Everyone slept on the beach that night, and when Nick went in for his ultrasound they split the bill. They knew he couldn’t really afford the test, and it was a really nice moment that showed just how much of a family these guys have become. Nick was OK, of course, and I felt like that was an important step for him too. Since we met Nick he’s struggled with the idea that he’s done nothing with his life, and even if law school wasn’t for him I’d like to see the character do something else.

There was also a lot of Nick/Jess chemistry in this episode, and I wouldn’t mind seeing those two together before the season ends. I feel like in some ways, Jess and Nick are younger versions of Lorelai and Luke from Gilmore Girls – the grumpy guy and the energetic gal that need each other to balance the scales. I always had a problem with Gilmore Girls in how often they toyed with that relationship, so hopefully New Girl avoids that trap.

What did you guys think of “Injured”? Are you happy with the direction New Girl is going for a show in its first season?