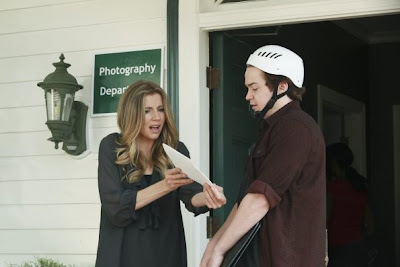 1. Ellie’s reaction to finding out Laurie’s fake relationship was actually a little bit real. I don’t know about you guys, but I did not see that joke coming. I laughed at Laurie throughout the episode as she talked about Tweeting naked photos to a stranger and hoped her fake boyfriend would turn out to be “black as space”, and I was all set for uber-snark when Ellie and Grayson teamed up for a dramatic reading of their Tweets. But they were actually kind of sweet! And Ellie teared up. This spoke to me, as I plan on being The Ellie of my Cul-de-sac Crew. (OK, I’m more like 2/3 Ellie, 1/6 Jules and 1/6 Laurie.)

3. Travis is still wearing that ridiculous helmet. And it’s true, you really can’t take candid photos when you look so obviously like a weirdo.

4. Sarah Chalke and Bobby! I didn’t watch Scrubs, so I will have to try and forgive Sarah Chalke for leaving Ted of HIMYM at the altar before I can get on board with her and Bobby. But Bobby in love sure is cute. They can have a cute little blond baby and also name him Travis! Then there’s be Big Travis, Little Travis and Dog Travis. But seriously, Sarah Chalke was really funny, and had instant chemistry with both Travis and Bobby. “Wow, it is not easy to have an honest moment with a kid wearing a helmet. But I’ll push through.” She already feels like part of the cast, so I hope she sticks around.

5. My Cul-de-sac Crew is definitely having a wine fountain. But mine will have Prosecco, so it won’t look like blood.