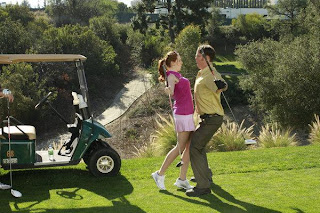 While I haven’t loved the Florida arc or this season of The Office as a whole, there have been some moments where I think it has worked. What I liked about “Last Day in Florida” was that it felt like a good wrap up for the storyline, and justified some bits of the plot that I’d been iffy on before.

One, of course, was the joke that Sabre sells crappy products. We’ve known this all along, and I knew it was intentional on the writers’ part. So it was nice to see the payoff – Sabre was bailing on their plan for stores and they needed a scapegoat. That led to a really nice moment with Jim and Dwight – Jim knew Robert California was planning on letting Dwight take the fall, and he had to try his hardest (not his “pretty hardest”) to alert Dwight. I loved the contrast of the hilarity of Jim and Dwight physically fighting in the hallway as Jim tried to block Dwight from entering a meeting, and then the emotion of Dwight realizing since Jim had delayed him, it was Todd Packer who was losing his job instead.

I also liked the payoff of Erin’s decision to stay in Florida. She’s working for Georgette, which delivered hilarious moments in an of itself (“I just boiled some Gatorade”) and her decision was inevitably going to bring up some emotions for Andy. As someone who’s always been rooting for Andy and Erin, I’m happy with this storyline.

And I liked the idea of Toby and Darryl battling it out for the opportunity to sell Girl Guide cookies to Kevin. Of course Kevin would be the best customer in the office, and it was fun to see the tables turn from the sellers making fools of themselves to make the sale to Kevin making a fool of himself when he lost the chance to buy from either of them.

What did you guys think of “Last Day in Florida”?