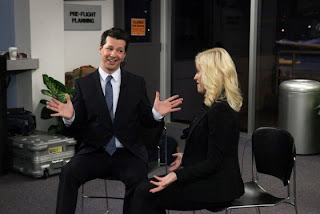 Sean Hayes appeared on Parks and Recreation last night as a villainous reporter interviewing Leslie about her campaign, and his guest spot marked yet another fun, funny episode of Parks. I, for one, have really enjoyed this season – watching Leslie’s campaign has provided for a lot of fresh material, and in particular I’ve really liked watching April’s character develop from sullen teen into reluctantly nice grownup as she makes it her mission to cheer up Chris Traeger.

Leslie was supposed to appear as a guest on Buddy Wood’s morning show, which was going to be a big deal. But when the gig got canceled, she decided to go for drinks and blow off some steam with Ann and Tom. Apparently “Fun Ben” had disappeared, and serious, workaholic Ben was in his place. I do wish that Ben’s role as a fun-killer had been set up a little more, since we definitely heard about his attitude of late more than we actually saw it.

Then there was an opening, and Leslie could be on the show if she could get to the airport RIGHT NOW. That meant a drunk Leslie had to do the interview, and it turned out to be quite the challenge. Buddy was pushing the idea that Pawnee is past its prime (did Pawnee ever have a prime?) and Leslie wasn’t in the best position to defend the city she loves so much.

I like this idea because any viewer would know that Pawnee is a pretty ridiculous city. It’s not such an outlandish idea that someone from a more successful part of Indiana would look down on it -after all, just think about those snooty Eagleton folks.

Leslie bombed the interview, but her likability saved her. Her pals at the airport made sure Buddy’s bags were “lost”, so the footage was misplaced.

The B-plots were also funny – Donna’s fascination with Jerry’s love of monotonous work and Ron sleeping with a woman Chris was interested in. Even Tom and Ann’s weird on-again/off-again relationship had some funny moments this week.

What did you guys think of “Lucky”?

No more shows until April 19th, which is a bummer. See you then!