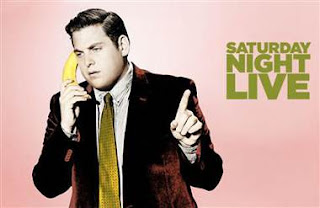 Channing
Tatum already had his turn to promote the new 21 Jump Street
movie so now it is Jonah Hill’s turn. I am not a huge fan of Jonah Hill. I feel
he is only funny because he books really funny movies. I don’t think it is his
comedic efforts that elevate the script. (Harsh, I know.)

Jonah
Hill is fresh off his first Oscar nomination for Best Supporting Actor in Moneyball. I didn’t see that movie, but
really? Oscar-worthy? (Ed. Note from Jill:
I saw it, I didn’t think so. But he was good in it.) And speaking of his
trip to the Oscars, did you see when he lost the award? He didn’t make the best
face. 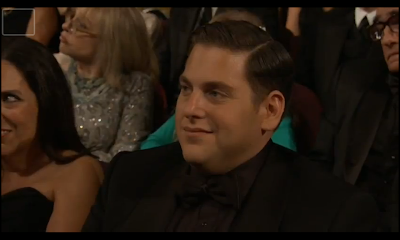 Haven’t you seen that episode of Friends where you rehearse your gracious face?
FAIL. Jonah be happy for the 88-year-old movie legend who FINALLY got his
Oscar. Geez Louise!
Please
note as I watched tonight’s episode I was accompanied by my sister from whom I
steal many jokes. Her commentary may appear throughout this post.
Opening Sketch – Rush
Limbaugh
That
man sure knows how to get attention. I was pleasantly surprised that Taran
played this role. He is really starting to be the impression guy of the group.
Maybe he is being groomed to take over whenever Bill Hader leaves? This skit
was funny but it reminded me of the sports commentary sketches Jason Sudeikis
and Will Forte would perform. Remember those skits where they commented on
events sponsored by Vagisil, Summer’s Eve or any other awkward female products?
Genius. So this skit made me miss that.
Monologue
Is
it just me or is Jonah really low energy tonight? I know he has already hosted
the show before but he seems like he is not that excited to be there. This
monologue was separated in three parts, first Jonah talks about his Oscar trip
which was mediocre then we are treated to a mock-umentary of Jonah behind the
scenes at SNL. This was a funny skit showing how Jonah has changed after being
nominated. The funniest part was how his glasses became smaller and his scarves
much larger. 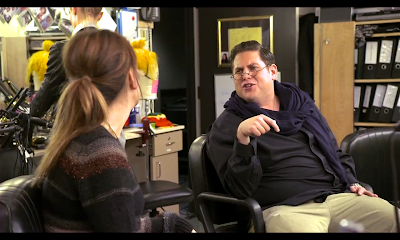 Then…Tom
Hanks shows up. Now I love me a good Tom Hanks cameo (He should host the show
again) but this appearance seemed so unnecessary. Both actors seem to know this
part of the sketch was dying.
My
sister’s reaction: “There is something bothering Jonah? What is it?”
Digitial Short:
Science Finders
This
didn’t really save the digital short but it was at least funnier than the last
few. I felt bad for Jonah. How can they hit someone with a tennis ball and make
it look so real? Was it real? That is some special effects magic. I laughed
when the sound Jonah made was repeated over and over again. I would like to
describe it for you but there is no way I can create onomatopoeia for that.
(How ya like me, now High School English teachers?)
My
sister’s reaction: “Pretty lame until Keenan showed up in that hilarious wig.” 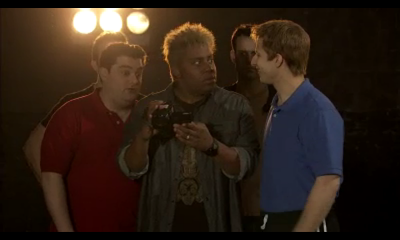 Adam Grossman the
six-year-old
I
knew they would reprise this sketch if Jonah was hosting. It is impressive when
a host creates a character that the writers like to do again. (Like Justin
Timberlake’s Homelessville sketch). Jonah is funny especially when he keeps
picking on his loser father. He also said some insanely dirty things that I was
surprised they got away with. Well, this does air pretty late.
J-Pop Fun Time
Again
this is a cultural thing I don’t get and find it a little offensive. When Jonah
came out and started using that voice I closed my eyes and thought I was
watching an episode of South
Park. I did enjoy when
Jonah started laughing because again I am worried this kid is totally bummed.
But seriously, who likes these sketches?
Weekend Update
Seth’s
first guest was Paula Deen played by Kristen. Now this isn’t a difficult
impression to do. You just have to get really loud and say the word butter like
“boo-der” and oil like “owl.”
Our
second guest to arrive was Sarah Palin played by Andy Samberg. The joke was
Tina Fey couldn’t show up and Andy had to step in but he is terrible at it. He
can’t even get her “You betcha” catchphrase right. This seemed so amateurish
and not really timely. I know that Sarah Palin movie is coming out, but that is
only on HBO. And I sadly don’t have HBO.
Seth’s
third and final guest was our old pal Stefan. I love the name of the crazy
clubs Stefan describes. Tonight my favorite was, “Kevin?” I do have to say that
I don’t agree with using the word midget. The writers know better than that. Who
do you think you are? Survivor‘s
Colton? Just say, “little person.” At the end Stefan tricks Seth into saying,
“Kiss me, I’m Irish” so he can finally kiss Seth. It was a very special
moment.
Joke
of the night:
Scientists
discovered that the body of an ancient iceman who was murdered was also lactose
intolerant: “Probably was killed because he wouldn’t shut up about it.”
Brutus
Oh,
this skit was funny for a few seconds. My sister really lost it after the
monkey said: “He. Sex. Me.” Yeah that was funny! But as soon as they started
talking about babies this skit just became not funny. 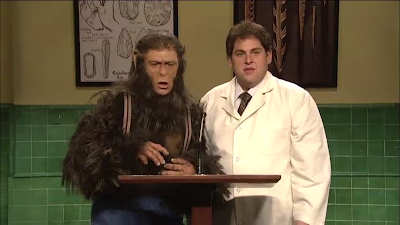 Liza Minelli Turns
Off A Lamp
This
skit was an exact copy of “Anne Margaret throws garbage in a can.” Yes, Kristen
is the best with physical comedy but it just seems lazy to give over 3 and a
half minutes to her dancing.
I’ll C U When U Get
There
If
you remembered this song
and if you can actually remember Coolio then, like me, you would find this
skit hilarious. The set up was so odd but someone on the writing staff must
love this song. At the end there was so much laughter from the cast I felt like
I was watching a karaoke night. (This reminds me to book some karaoke with my
friends.) (Ed. Note from Jill: YES.)
I also enjoyed when the cast went out into the audience which I have never seen
before and I appreciated the feeling of camaraderie that was shown. Sadly, due
to copyright laws this isn’t available in Canada.
Again,
I can’t help but think that Jonah Hill is bummed about something. Even when he
introduced the musical guests he just was not into it. What’s wrong Jonah? Talk
to Allison.
SNL
will have a three week break until they return April 7 with Sophia Vergara. I
have high hopes for her, but we will see.
That’s
it, Couchtime Readers!
Follow
me: AlliTweeds