After last week’s action packed, suspenseful episode of The Amazing Race, last night’s installment felt a tad dull to me. It’s early yet, and I’ve always felt that The Amazing Race doesn’t hit its stride so much until there are about six or so teams left. Right now we have eight, and it’s still feeling a little cluttered. (I know who I’d like to get rid of.)

Sunday night’s episode took the teams from Paraguay to Italy, where they rappelled, tasted salami and washed/decapitated statues – tasks that weren’t really up to the task of rivaling watermelon stacking, as odd as that may sound.

Most of the teams began the leg on even footing, all on the same flight to Turin, Italy. But Mark and Bopper made the mistake of heading to the airport before a travel agent (something that had been spelled out for them in the clue), and landed themselves on a different flight than everyone else, setting them over an hour behind. It was an unfortunate, avoidable mistake that left them in last place the entire leg. 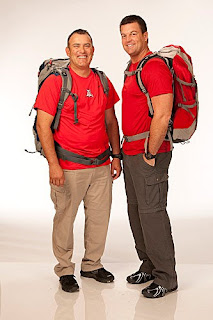 Once in Italy, all the teams raced to the top of the Lingotto Building, a weird climbing race track. At the top they were greeted with two clues – one for the Roadblock, and one for the Fast Forward. Art and J.J. had arrived first, so they took off for the Fast Forward – a challenge that required one of them to “land a helicopter”.

It actually ended up being a toy helicopter, which had to be landed on a to-scale version of a nearby landing pad…and the model was attached to a helmet which one teammate would have to wear. Cute! The task was actually harder than it looked, but eventually Art and J.J. completed the landing and took off for the Pit Stop. They scored a first place finish and five thousand bucks apiece.

I think TAR needs to put some more thought into where these Fast Forwards pop up. I wish that it weren’t so obvious to teams that someone had already gone for it, or that the task would be difficult enough that it might be a safer choice for several teams to try and get it. As it works right now, the Fast Forward only ever seems to go to whichever team’s taxi arrives at the clue box first.

Meanwhile, all the other teams went for the Roadblock, which required one team member to rappel down the inside of the race track and grab a clue, within a two minute time limit. This leg seemed to show the first few cracks in Rachel and Dave’s relationship, and they bickered when he said he wanted to go for the Fast Forward. He’s a helicopter pilot and thought he’d finish quickly, but Rachel knew that Art and J.J. had already gone for it and thought it was a waste of time. Dave was weirdly stern with his wife, treating her more like a military underling than, you know, his soul mate.

The clue instructed teams to head to Museo Nazionale dell’Automobile, where they’d find more instructions at “Tin Lizzie” – a 1916 Ford Model T. There was also some uber-successful product placement as all the teams got a Ford Focus that self-parked. (Can someone buy me one of those? Parking was not my strong suit when I took my driving test.)

It’s Not Easy Being Green 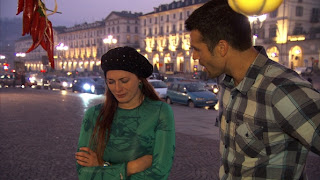 Proving yet again that being in the lead doesn’t mean you can’t have an emotional breakdown, Rachel of Brendan and Rachel had a huge meltdown while looking for their clue at the auto museum. It began when, apparently, Brendon was rude to Rachel. “It’s not even worth a million dollars,” Rachel sobbed. “I will stop right now, I will get last place, you have no right to talk to me like that.” “Like what?” I yelled at my TV. We were both having a moment.

I can’t help but think that their unnecessary fighting causes more problems than just emotional for Brendon and Rachel. Their minds aren’t focused on the game, and it took them forever to work out their next clue while everyone else got it pretty quickly – drive to the image featured on the coin. Rachel was clearly too busy thinking about hypocritical retorts to focus on the actual race. When Brendon suggested quitting – something she had threatened to do, like, five minutes earlier – she lost it. “Why would I wanna call it quits, Brendon?” she sneered. “You say that about everything. You’re probably gonna say that about your PhD.” Whoa! Out of bounds!

Clearly, these two have a lot of problems. “We’ve hit a brick wall with this whole entire experience,” Brendon told the camera. “And our marriage,” added Rachel. Y’all! You’re not even married yet! Though perhaps it’s better that it was over before it even begun. Think of the children, you know?

The Detour this week was so dull that I couldn’t even think of a clever sub-head for it. Teams had to choose between tasting and correctly identifying 14 different types of salami, or washing a large, dirty statue. I felt like the statue task was the obvious choice. How on earth would one identify that many types of salami? I would be terrible at it: “Hmm, this one tastes like…meat. And…this one also tastes like meat! Yep, they all taste like meat.” 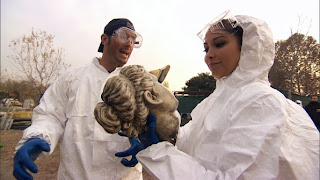 Unsurprisingly, most of the teams chose to wash statues. Only Team Big Brother and the cousins went for the salami, and naturally Vanessa took that opportunity to throw a jab Rachel’s way about having a lot of meat in her mouth. I’d question Vanessa’s unexplained hatred for another team if it were for anyone else, but since it’s Rachel of Big Brother I feel her grudge needs know explanation. Besides, Vanessa’s pretty hilarious – that Knight Rider joke brought some much needed levity to the product placement stuff, and there were a few other funny things said as well – about herself and her arch-nemesis Rachel. 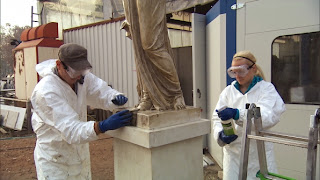 While Rachel and Brendon were sent back to taste more salami thanks to a couple incorrect identifications,  the teams who opted to scrub statues started to wrap up. Despite their increased bickering this leg, Rachel and Dave scored second place, followed by the meatheads (why didn’t they go for salami?) Joey and Danny in third, Vanessa and Ralph in fourth and Nary and Jamie in fifth. Then the mealovers came in, with Brendan and Rachel in sixth and Kerri and Stacy in seventh. 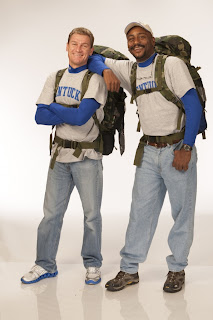 That just left poor Bopper and Mark, who never really had an opportunity to catch up. However, I had a feeling it would be a non-elimination leg. We hadn’t had one yet, they often seem to go hand-in-hand with the leg that features a Fast Forward, and when Phil didn’t announce “You have been eliminated from The Race” right away I knew it was a lock. But first – but first! First, there was a Very Special Moment.

I haven’t been the biggest Art and J.J. fans, but even my tiny black heart was warmed when they appeared at the mat to announce that they were donating half of their $10,000 prize for finishing the leg first to Bopper, who’d been running the race to win money for his sick seven year-old daughter. Awwww! Like them or not, you have to admit that the donation was really nice. This isn’t Survivor, no one is lobbying for votes at the end of the show. That was just a warm, generous, kindhearted move.

And THEN Phil announced that Bopper and Mark were still in the race, as it was a non-elimination leg. I don’t think these dudes have a chance in hell of winning, but if through some miracle they do then I hope they return the $5000 gift.