You knew it was only a matter of time before Sheldon really hurt Amy’s feelings. But what I really liked about last night’s episode of The Big Bang Theory was how it through me for a loop at the end, shifting focus from “Shamy” to a more underused character, Raj.

Sheldon bailed on a family gathering with Amy in favor of playing games with the guys, and that meant poor Amy had to face a bunch of suspicious relatives alone – after all, her last boyfriend the miniature horse breeder, was all kinds of imaginary. 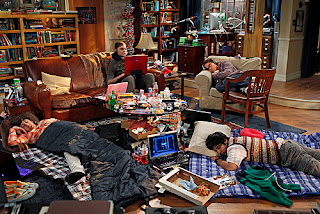 While Sheldon was completely oblivious to Amy’s attempt at a guilt trip, Leonard was kind of bummed to discover that Penny couldn’t care less about a guys’ weekend. And when Bernadette heard about the plans, she just invited herself right along. It was fun to see how Raj’s plans played out within each of the three romantic relationships.

So Bernadette played nerd games with the boys while Amy moped to Penny that she’d missed out on her chance to show off Sheldon Cooper (!) to her family. Penny gave Amy a little coaching on feminine wiles – skipping ‘withhold sex’, of course, and moving right into ’cause a scene’. When the gals confronted Sheldon about his crappy boyfriend behavior, it was Raj who had the biggest reaction. Anger and frustration.

Poor Raj. Everyone in his life has someone now, and he can’t even organize a good old fashioned video games sleepover weekend without having that sad truth rubbed in his face. It was almost a meta moment – Raj is being shoved to the background as a person in the universe of this show, but he’s also been shoved to the background as a character while the writers focus on the new relationships that have been created.

As myself and many other viewers have been saying all season, there have been a lot of strong hints regarding Raj’s sexuality. I didn’t notice any in this episode, but I do wonder if putting the spotlight back on his character is a way to begin a more major storyline for him.

What did you guys think of “The Weekend Vortex”?