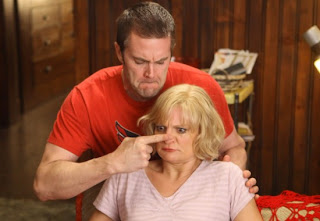 Last night’s Raising Hope was the first episode in a while to focus more directly on parenting, and I think the result was good. Back when Jimmy first had little Princess Beyonce come into his life, there were a lot of cringe-inducing moments that had to do with his lack of parenting experience. Those moments have somewhat evaporated, but I liked the idea that Jimmy would be such an easygoing parent that Hope might develop an attitude and some bad behavior as she becomes a toddler.

Naturally, a debate ensued over whether to spank Hope as punishment for her transgressions, like throwing food, not eating vegetables, and breaking one of Virginia’s prized pig figurines. Virginia said spanking Jimmy only once as a child had worked wonders on his bad behavior, but we later learned through Burt that he’d never gone through with the punishment and faked Jimmy’s god behavior throughout the rest of his childhood.

I liked this storyline, but the Virgina vs. Racoon B-plot didn’t work for me as well. However, I do like the idea of Sabrina just always being around the Chance household. The stuff about tea really made me laugh, but I wish she’d been brought into the spanking debate a little more.