Oh hey, remember how last week the men gave up Immunity and voluntarily went to Tribal Council? And remember how we all made fun of them? Well, as it turns out, that’s exactly what the women’s tribe was doing too.

“The guys are much more of a mess than we thought,” said Sabrina. Correct! “They are so dumb. They handed us a million dollars,” said Alicia. Ri-wrong! Yes, they are dumb. But Alicia, you cannot collectively win the million bucks, and you’re a long way from Final Tribal Council. Calm yourself.

Of course, the fact that the ladies were about one step away from trotting over to the guys’ camp to sing Beyonce’s “Run The World (Girls)” could only mean one thing: Tribal shake up! Argh. Let’s talk about this. 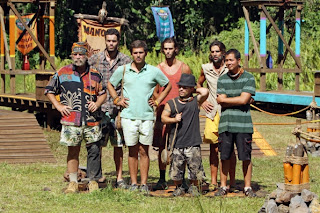 I’ve thought all along that there was a good chance the producers would choose to shake up the tribes this season – it often seems as though they do that when tribes are divided by age, race or gender. But honestly, I wish they wouldn’t. I know Survivor is full of surprises and you can’t plan for anything. But I hate how a tribal switch can obliterate alliances and render any good strategy work done by a player completely moot just because he/she didn’t end up with the right color buff. I was looking forward to seeing if the women would pull into the lead after the men made that questionable decision. Now we’ll never know.

Furthermore, I’m bummed that they’ve opted to abandon the “one beach” concept so quickly. Why on earth would you shake up the tribes and then send one tribe to live on another beach? Isn’t it even more interesting to have both tribes living on the same beach now that they’ve been shuffled? Friends have been made, alliances have been arranged, and I’d be interested to see who could resist the temptation of walking a few feet to talk to one of their  old pals. Survivor had an interesting concept with the “one beach” thing and abandoned it way too early in the game.

Now, as you may remember if you come here a lot, I have Kim in the office Survivor pool. Luckily, I also really like Kim. And for Kim, this couldn’t have gone better. Here’s the new tribes:

Salani (Blue): Kim, Sabrina, Chelsea, Kat, Jay, Troyzan, Michael
Not only does this tribe have four of the five girls from their original alliance, but they dumped the girl that was questionable – Alicia. Remember how Sabrina wanted to vote her out last week, before they discovered they wouldn’t be going to Tribal Council? Yes, for Sabrina this couldn’t have gone better. And they got the three strongest dudes from the other tribe. Unbelievably lucky.

Manono (Orange): Alicia, Christina, Monica, Leif, Colton, Tarzan and Jonas.
Now, my mom has Jonas in the office pool, so I really feel for her. This is a weak, sad excuse for a tribe. Their strongest player is a forty-one year old mom! And they aren’t just weak, they’re annoying. Alicia + Colton = Obnoxious Overload.

As Colton said, it’s “Greek Gods” vs. “Peasants”. Because nothing endears you to new tribe members like mocking how inferior they are. Lovely. And with the new tribes declared, it was time for the reward challenge! The tribes were playing for PB&J sandwiches, coffee, and the right to stay in the old camp. Not too shabby! The challenge was to fill a large, hole-covered bucket with water and dump it into a container. When a tribe had dumped enough water, the container would drop and their tribal flag would be raised.

It’s a pretty simple concept, but it’s one that requires teamwork. The players need to be running together, and one person stumbling (Monica, in this case) can cause the bucket to spill or water to  pour out the holes that person was covering. It was close, but Salani won and went back to their old camp to feast on peanut butter.

Manono followed a map to their new home and tried to make the most of it. For many, that meant getting to work on a new shelter. For Colton, that meant running around needlessly scheming. Jonas was mad, but not mad enough to do anything other than muse like a moron. “How does he get away with it?” he wondered. Um, because everyone on his tribe lets him? “I never thought to play that game, but it’s brilliant.” What? How? How is it brilliant? Saying Colton is brilliant is like calling a rock a diamond just because it’s a little shinier than all the other rocks surrounding it.

I don’t understand what Colton was trying to accomplish. First, he told Monica, Christina and Alicia that he was with them. OK, three gals and a gay guy – four vs. three, you’re golden. But he didn’t actually want to do that, so he convinced Alicia to stick with him. First of all, Colton didn’t even need Alicia to vote out Monica – he could have done that with the other guys, all on his own. But he and Alicia are pals, so I understand why he tried to include her. But why go through all the trouble of pretending you’re voting out Tarzan? 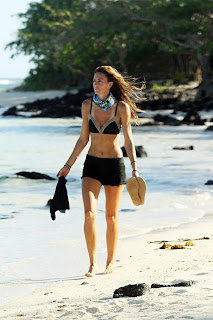 Meanwhile, things were just peachy over at Salani. First of all, they were eating like kings – they caught four large crabs and a rooster. You know what happened when Manono tried to catch a chicken? It walked out the open side of the crate they used. Like, “Oh hey, a box fell on me! Only there’s an open door RIGHT HERE.”

Sabrina was thrilled to be with her gal pals, and Kim thought things couldn’t get any better since she had her old alliance in tact and was making inroads with Jay and Troyzan as well. But things did get better! Knowing that the guys’ Hidden Immunity Idol had been found at the girls’ camp, she wandered over to the abandoned guys’ camp to look for her own. And she found it! Kim is in a pretty sweet spot right now. And then all male Survivor viewers freaked out a little when Kim revealed to Chelsea that she’d hidden the Idol in her crotch. Sexy or gross? I say resourceful!

Up until now we’ve had pretty hands-off challenges, because of the men vs. women thing. So the one bright spot in the tribal shakeup was that we got to watch a physical challenge take place, and it was kind of hilarious.

The tribes were essentially playing basketball in the water, if basketball had three players per team and they were allowed to toss each other around. The first tribe to score three baskets would win Immunity. 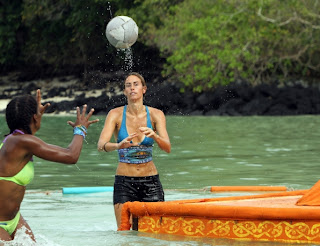 The first round was all men, and featured an odd decision from Manono to have Leif guard their net. Leif…vs. Michael. Leif’s method of attack was weakly splashing some water and Michael, and Michael’s tactic was to simple push Leif out of his way. Hey, he did the same to Monica in a later round – Michael might be a jerk, but he’s a non-discriminatory jerk. Monica scored one point for Manono, but Salani won quite handily.

So Manono would be going to tribal council, and it was pretty obvious the vote would be for Monica. In fact, the only suspense would be whether Tarzan could remember Monica’s name. Therefore, Tribal Council was odd. Everyone sang Monica’s praises but declared her a threat in the game. Again, remind me why there needed to be such an elaborate ruse regarding Monica? Then Tarzan used a bunch of big, fancy words, and Leif muttered out several completely imaginary ones. “I can explinate!” Oh no Leif, I’m sorry, but you can’t. Tarzan revealed that he has “nominal aphasia”, which makes it difficult for him to remember people’s names. Geez, remind me not to go to this guy for surgery – I’d go in for a simple procedure and come out with a new face just because he thought my name was Muffy!

Now, aphasia develops because of head injuries, stroke, dementia, brain tumours and other such trauma. But Tarzan said he’s always had it? Hmm. Curioser and curiouser. According to Wikipedia (shut up, it’s a real source) aphasia can also be a learning disability such as dysnomia, which is difficulty retrieving correct words, names or numbers from memory. Interesting! 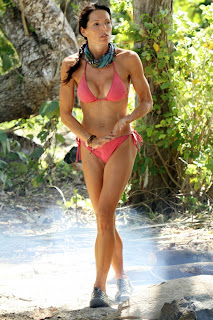 Tarzan managed to remember Monica’s name, everyone other than Monica and Christina voted for her, and that was that. It’s really too bad – Monica was a tough lady and got the short end of the stick in this game. Had she ended up on the other tribe, I think she might have had better luck.

What did you guys think of the episode? Were you glad to see the tribes shaken up or do you wish they’d stayed the same? Do you think Kim can hold onto the power she has right now all the way to the end? How long before someone dethrones Colton? And now that Manono has voted out their strongest member, will they ever win a challenge?