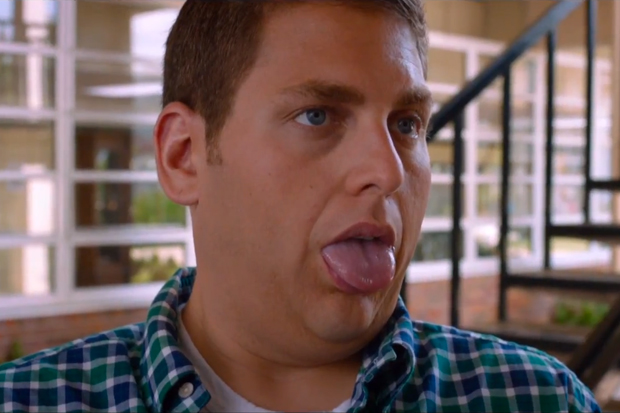 The box office was back to its winning ways after a down week last week. 21 Jump Street, proving that recycled television properties can make for entertaining movies with the right personnel, took the weekend with an estimated $35 million opening. Now its success isn’t derived from the show’s original popularity, which reached its peak back in the late ’80s, but rather because it was a teenage-geared, hard R comedy with Jonah Hill and Channing Tatum part of central casting. So you have a film where stoners plus women fawning for Channing occupying space in the same theater – not necessarily on the same row.

I was sold on the original trailer while others were not. Conversely, I didn’t enjoy any of the marketing for John Carter and that film was better than its marketing. As an action-comedy 21 Jump Street isn’t the new standard or anything, but it supplied just enough heart with Hill and Tatum’s characters to make you regress back to your high school days when it was a simpler time when teenagers weren’t as mean or spoiled as they are today.

For Hill and Tatum, both have been on fire. Hill fresh off his Oscar nomination for Moneyball goes back to familiar territory with Jump Street as it echoes his previous comedy with Michael Cera, Superbad. This is Tatum’s third film this year. After getting his assed kicked by Gina Carano in Haywire and trying to make Rachel McAdams remember him in The Vow – a romantic drama that has grossed over $120 million domestically – he shows off his comic chops just in time before he strips down for Magic Mike this summer. Considering the strong reviews and box office numbers (it only cost $42 million to produce), we should expect 21 Jump Street: The College Years a few years from now.

The Lorax, feeling the pressure of holding off two successive $30 million plus debuts in the last two weeks, couldn’t outperform Hill’s action-comedy. Nevertheless, $22.8 million is nothing to sneeze at. With that total The Lorax has surpassed Fox’s Horton Hears a Who and will most likely remain the second-highest grossing Dr. Seuss adapataion this weekend to become the second highest grossing Dr. Seuss adaptation behind Ron Howard’s reprehensible live-action version of How The Grinch Stole Christmas with Jim Carrey as The Grinch.

John Carter took a major plunge this weekend, losing more than half of its audience. The $250 million gamble for Disney isn’t likely to get a sequel unless it performs strongly overseas and on home video. But with the arrival of The Hunger Games this upcoming weekend, it’s going to be that much harder for Carter to make it to six-figure territory stateside.

Michael Bacall, who wrote 21 Jump Street, sees another one of his story/screenplays staying strong in the top 10. Project X finishes its third weekend in fourth place with a grand total of $48 million. Its audience no doubt bolted to Jump Street but in the weeks to come it has a an outside shot of finishing its run with $60 million. It again continues the found-footage success train joining The Devil Inside and Chronicle as two other films this year that have made more than $50 million worldwide (Devil Inside has accumulated $91 million, Chronicle with $116 million).

Fifth and sixth places is too close to declare a definitive winner but Eddie Murphy’s A Thousand Words finished with an estimated $3.75 million versus Act of Valor‘s $3.68 million. In its four weeks of release, the Navy SEALs action flick has made $62 million.

Safe House and Journey 2: The Mysterious Island are nearing the end of their Top 10 status. Denzel Washington’s CIA spy/mole actioneer has amassed $120 million in its six weeks in theaters and is just $10 million shy of surpassing American Gangster his most successful starring vehicle, domestically that is. People are still enjoying what The Rock is cooking. As the new addition to the Journey franchise, the sequel has gone to gross nearly $300 million worldwide. With the upcoming release of The Hunger Games with Journey‘s Josh Hutchinson, the producers will no doubt be scrambling to ensure that both Hutchinson and Johnson are back for a third installment. Both actors are on board…for now.

Will Ferrell’s Spanish comedy Casa de mi Padre got a limited release from Lionsgate dropping at 382 locations. But it managed to pull in over $2.2 million. This is despite mixed reviews (Scott wasn’t a fan). Maybe it was a test to see how well Ferrell would translate in countries like Mexico and Spain, because his global box office is pretty poor.

Also in limited release was the latest Duplass comedy Jeff, Who Lives at Home (read our review). It didn’t fare nearly as well as Ferrell’s Spanish-speaking experiment. Opening in 254 theaters, it managed a meager $840k.

Hey, did you know there was a new Nicolas Cage movie in release? Yeah, neither did anyone else. Seeking Justice is a middle-of-the-pack action-thriller that opened in 231 theaters and made only $260k. A better smaller release was IFC Films’ Kid with a Bike. It opened at three locations and earned $51k. Adrien Brody’s Detachment, which is available VOD, opened on two screens to the tune of $11k.

If you have an arthouse near your location your best bets for entertainment right now are A Separation. Winner of the Academy Award for Best Foreign Film and also nominated for Original Screenplay, it made another $510k to bring its domestic total to $5.6 million. And don’t be afraid of paying to see a film whose title reads Salmon Fishing in the Yemen. The Ewan McGreggor-Emily Blunt starring vehicle is a sweet movie and Kristin Scott Thomas is a venerable scene-stealer. It expanded from 18 to 62 engagements for $455k in its second week of release.