As many of you know, AVX #1 hits stands officially this Wednesday April 4th or a few hours earlier. However, Marvel Comics shipped the book last week with AVX #0 to allow retailers to host AVX “launch” parties on Tuesday April 3rd to hype Marvel’s mega-event.

Retailers were not to sell any AVX #1’s before the April 3rd evening, despite having the title for a week in advance, with painful sanctions and retribution threatened by Marvel and Diamond, the main supplier of comics in North America.

That said, I was able to pick up AVX #1 last week (by accident I surmise) so read it and sat on the below nuggets until now, the day before comic book day. This afternoon and evening there will be several AVX launch events at retailers near you.

There is a lot in this book, but I’ll let you be the judge of it in its totality when you pick it up this evening or tomorrow.

However, what did catch my interest were a few panels in the book that essentially, in my humble opinion, sets one of the two Marvel teams in this battle as the villains and one as the heroes. That may not be how Marvel sees it, but check out the below 4 select panels, and you decide. I have chosen to post just these 4 panels and not the bridging panels between them or other images from the book.

The 4 panels are pretty self explanatory.

So, who do you think looks like the villain here? See who fires the first shot below and his demeanor. 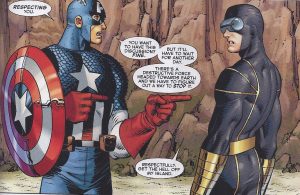 I don’t think this is a huge spoiler since many of Marvel’s teaser images showed an aggressive Cyclops, um, “eye beaming” a shielded Captain America. See the image to the right as proof.