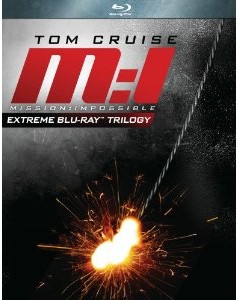 With Tuesday’s upcoming release of Mission: Impossible – Ghost Protocol to home video, Amazon.com is offering the first three films in the series at one incredibly low price. For its Blu-ray Deal of the Week, the online giant has the Mission: Impossible Extreme Trilogy set for only $17.99. That’s 55% off the suggested list price.

The series, which sees Tom Cruise as the stalwart Ethan Hunt, an IMF agent that keeps taking on one impossible mission after another, has been overseen by the likes of Brian De Palma (Scarface, Carrie), John Woo (Hard Boiled, Face/Off), and J.J. Abrams (Star Trek, Super 8). And that’s the most interesting thing about these spy adventures – different interpretations in terms of action and suspense with each entry.

If you are looking for an early Father’s Day gift or have a mom that just can’t get enough of Tom Cruise, go ahead and pick up this Extreme Blu-ray Trilogy. It’s a purchase you should choose to accept.