I have a son who is now discovering modern versions of television shows that I enjoyed when I was younger. Primarily his favorite is Transformers, and we watch Transformers Prime once in a while. 1 It is very strange to have to explain to a five year old boy that in the 80s Bumblebee is a VW Beetle and in the current version he is a Chevy Camaro. If characters last long enough, they change and modernize.

Which brings us to Deathstroke. I go back even further with Deathstroke than I do with Transformers. 2 It was always the honor and class that endeared the now “classic” Deathstroke to me. 3

So, last summer, during the DCnU explosion, I read Deathstroke #1. I didn’t review it at the time, but generally I would have given it a C. It was a fine action comic book, and Slade Wilson was interesting enough. Going forward, it was a decent take on Deathstroke, but it just wasn’t something that would appeal to me on a monthly basis. Slade was all “bad ass” mercenary, and little more.

Well, I read the preview for Deathstroke this week 4, and was pulled in. Seemed like a good reason to break out a Dropped in the Middle Review. 5 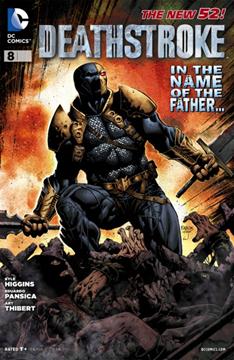 Slade Wilson is apparently having issues with his son Grant. In the original DC Universe, Grant Wilson was known as The Ravager and was killed during Deathstroke’s first encounter with the Teen Titans.

The issue goes back and forth between a series of flashbacks to the past, and the present where Slade is recoperating from his injuries.

Q:    Where did Slade Wilson go after he was sold to the gangsters. How does this fit in with his DCnU origin?

This was actually pretty good. Nothing exceptional, mind you, but Kyle Higgins has constructed a pretty interesting anti-hero story here. I am curious enough to know where this goes. Having not read Deathstroke #7, I am curious to know if his son, Grant, has taken on the moniker of Ravager and if the costume is similar. It seems obvious that they would keep to the original story and have Ravager die at some point in time, but that may be too easy. It’s the DCnU, and anything can happen here.

The old double-switch was a nice touch. We know that Slade Wilson is concerned about his son in this issue. So at the beginning of the comic, we get a flashback where a white haired man is sitting in a car with his son It’s only a few panels, but I’m automatically thinking that Slade is the man and Grant is the young man. And then they pull the switch, and the man says:

Yeah, it’s an easy trick. But it’s a trick you can’t do too often, and I must admit that Higgins and Pansica really pulled it off. It was that image alone that pulled me into the book. A slight tingle of, “Wow, I don’t know anything about Slade Wilson’s childhood, old universe or new.” Well done.

On the flip side. I didn’t like the look on Slade Wilson’s face when he left his father at the end of the issue. Now this is definitely me channeling the DCU Deathstroke into the DCnU Deathstroke, but to me Slade is professional through and through. Sure, he’d let you know that he succeeded or was better than you, but in a calculating sort of way. It felt wrong for him to get that much pleasure out of twisting the knife in his father. It ruined things for me a little bit.

The villain was too generic and easy. To me, there’s a missed opportunity to present Slade as a thrillseeker, someone who needs the adrenalin rush to go on. Maybe that’s been expressed in the previous issues. I would have liked some reason for him going after the “Small Job”. Did it remind him of his father? Did he just want something easy to get back in the game. Is he hurt, and he’s turning to his ‘drug’ to get him back on track? There’s room where that could have been explored just a little.

Okay, handing a knife to “Kill Switch’s” son was waaaay too reminiscent of Kill Bill. I know it’s already an easy comparisson, and sometimes you just go with what’s in front of you, but… I could have done without it. Plus, the kid’s father was just murdered by Slade, 6 there’s no way the kid would be ready to just turn the page and say he was a bad guy.

I can’t say the art is a mixed bag, because in most places it is pretty good. Slade Wilson looks pretty good and well drawn. But the drawing of Deathstroke’s costume is just so bulky and ridiculous. It looks like he’s in an Iron Man like suit, instead of a costume. The cover art is much better, and gives a stronger profile.

Overall, this was a pretty decent comic book. Personally, I don’t think my current comic book budget allows me to add Deathstroke to my existing list. But that doesn’t take away from its value. If you haven’t read a good mercenary book, and are looking for a nice fluffy action book, I think you could do far worse. The story is tight. There are a lot of dangling plot lines to explore. And I think Slade Wilson is a very compelling character.

1 – In a weird dichotomy, he prefers the classic Transformers cartoons and I prefer the modern Transformers Prime. I think he likes the classic one either because bad guys like Megatron were a little less scary in the 80s OR because Optimus Prime transforms into a truck every 5 minutes or so. And he LOOOVES Trucks. I prefer the modern one because I haven’t seen the episodes and because I now realize just HOW bad the 80s Sunbow cartoons were. I mean, I knew they weren’t great, but the animation is AWFUL.

2 – In 1980 I purchased New Teen Titans #2 off the rack (of a 7-11 I think), which was the debut of Deathstroke The Terminator, and I loved the character from day 1. Still one of my favorite villains of all time.

3 – Most classicly depicted in Tales of the New Teen Titans #55.

4 – In case you don’t know, Comixology/DC publishes a preview of ‘most’ of the DC Universe comics being published each week. It’s a decent opportunity to try out new comic books. I would recommend it even for those who aren’t reading comics digitally.

5 – Changed the name, only because I like how it rhymes with the chorus of the classic song “Stuck in the Middle with You”

6 – Though technically, Kill Switch gets the assist.

Marvel Comics & Amazing Spider-Man #93 Spoilers: What & Who Is Chasm?!