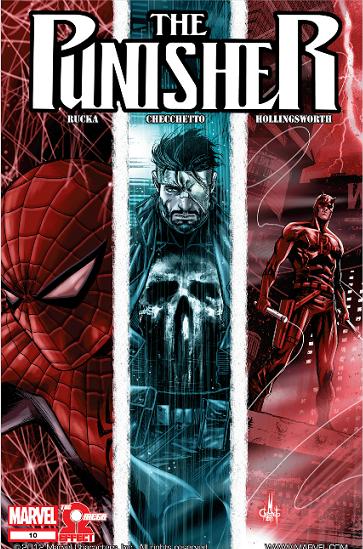 On the way to the rendevous site, Spidey and DD stop to deliever a baby. Meanwhile, Punisher is spraypainting a skull logo onto a bulletproof vest for his “sidekick” Rachel Cole-Alves. These scenes have some awesome parallels, so I am pretty much blowing my “fair use” budget by using those two pages as my sample panels for the review: 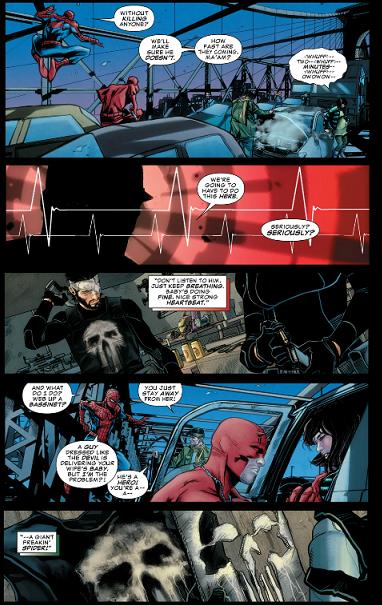 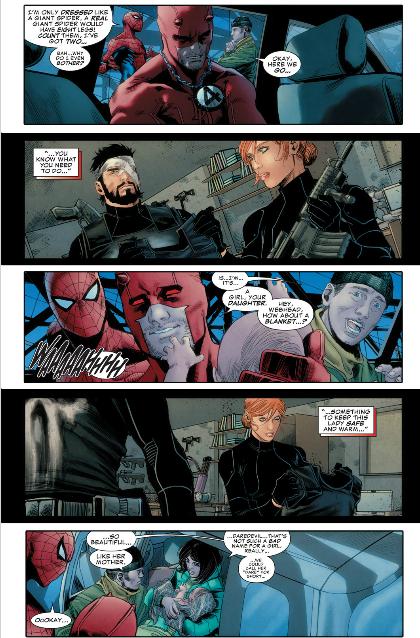 Once they arrive at the rendevous, Punisher tries to convince Spider-Man and Daredevil to turn over the Omega Drive to him. When he mentioned using it to take out the Exchange (who killed Rachel’s family), Cole pays extra attention at that scene. Definitely was some foreshadowing there. Daredevil declines giving them the drive, explaining:

Daredevil tries to talk to Rachel about Punisher’s way not being the right one, but she seems reluctant to take his advice. Punisher proposes splitting into two teams. Himself and Daredevil, Spider-Man with Cole. Spider-Man insists that he doesn’t trust Punisher being left alone with Daredevil and the Omega Drive, so it ends up being Daredevil with Cole and Spider-Man with Punisher. They set off attacking different criminal groups, all telling them to be at Grand Central Station at 3 AM if they want the Omega Drive.

The heroes await the bad guys, and just as Daredevil is about to destroy the Omega Drive, it seems like Cole shoots him in the back, sending him tumbling to the amassed villains, with the Omega Drive falling into Cole’s hands. To be concluded in Daredevil 11.

Review: One thing that kind of annoyed me about this issue is the implication that Daredevil turned to Punisher for help, which really isn’t what happend in the first part of this crossover. Punisher and Cole attacked Matt in his office and pretty much demanded the Omega Drive, so the heroes came up with a plan that seemed workable for everyone.

Also, it seemed strange to me that each organization would only send a few goons. HYDRA seems to send out hundreds of goons to pick up milk, and you’d think this would be important enough to rate a lot more of a bad guy presence that ten guys per group. I know they were trying to make it seem more realistic and not have the heroes dealing with hundreds of cannon fodder, but it still just seemed strange. I’m sure I’ve seen Spider-Man, Daredevil, and Punisher handle more thugs individually, much less as a group.

Third complaint is that the last scene really could have been a lot more clearer. I know they didn’t want to give away entirely what happened, letting the foreshadowing and reader’s imagination fill in the blanks until the story ends over in Daredevil.  But it wasn’t really clear what happened to Matt other than him tumbling to the ground and Cole picking up the drive.

Based on those complaints, it may seem like I really hated this comic, but I actually thought it was great. There were just some small details that annoyed me a little.

Actually, I liked this issue even more than the first part. The character moments were really well put together. Any scene with Daredevil and Cole in particular really gave a lot of insight into both characters, especially after the long journey Daredevil has been through over the years. He’s been in the same dark place as Cole, and eventually came out of it, and he’d really rather not see her have to learn the same lessons in the same ugly way.

And Rucka also had some great scenes with Spider-Man. Some writers manage to make Spider-Man seem like an annoying little brother, but alongside the jokes, we got a lot of solid insight into his relationship with Daredevil and Punisher. This really helped make this issue excellent.

Plus, as I posted above, I loved the scene where Spidey and Daredevil stop to deliever a baby. Just seeing how people react to these characters and they react to each other was a great touch, especially considering some of the darker places this story went. I really can’t afford to add any more books right now, but if this is any indication on the work Rucka’s doing on Punisher, this is probably a pretty good series.

I love that Marco Checchetto did the art for both Avenging Spider-Man and Punisher, it really gave these two books a lot of consistency. He’s also doing the third part of the story in Daredevil 11. It’s very rare you get to see an artist do that, and I really think that will serve this crossover well. I don’t know how he found time to draw these three comics as terrific as he did, but the result was well worth it.

While most of the industry’s attention has been on Night of the Owls and Avengers Vs X-Men, I really think Omega Effect is shaping up to be the best crossover going on right now. Three issues, self-contained in these three titles, two great writers (Rucka and Waid), and only one artist (Marco Checchetto). So, defintiely check out Omega Effect! Besides, in a few issues, Daredevil will be takin on Doctor Doom! Now that is a comic I just can’t wait to read!

Final Score: 8.0 – Omega Effect is shaping up to be a solid and underrated crossover. Definitely worth checking out!