Okay, does everyone remember Crisis on Infinite Earths? Or even if you don’t remember it, you certainly have heard about it, right? Well, long story short, the DC Universe combined all of their ‘earths’ into a single earth, in which the Justice Society were masked men from World War 2 and the Justice League were modern age heroes. It sparked a real creative explosion at DC Comics, allowing creators to break established characters out of their existing patterns. It was a triumph and a critical success. It defined the DC Universe for the following 25 years.

But there was one problem.

See, Earth-2 was FUN. I mean, we’re talking a world where Batman married Catwoman, Clark Kent became Editor in Chief of the Daily Planet, and all of the Justice Society heroes had children who formed their own superhero group, Infinity Inc. You could do anything in Earth-2, whether it was kill the Batman1 or put the Justice Society on trial for being Nazi collaborators.

Perhaps the biggest loss was the team-up/friendship of Power Girl (the Earth-2 version of Supergirl) and The Huntress (the daughter of Bruce Wayne and Selina Kyle). I remember reading the revived All-Star Comics from the 1970s that featured their friendship very prominently, and it was so enjoyable.

Some of this excitement was brought back in the late 2000s with Infinite Crisis, 52, Thy Kingdom Come story in Justice Society, and the hint of Grant Morrison’s Multiplicity series. But it never really came to fruition until the Earth-2 and World’s Finest series were announced a few months ago.

Do these new series capture the excitement of that crazy anything goes, Earth-2? Let’s find out. 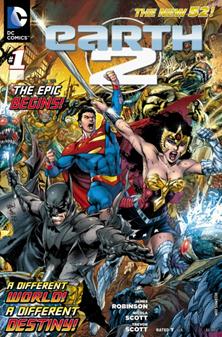 There’s no existing Earth-2 history in the DCnU (other than Power Girl and Huntress who we discuss later), so let’s just dive into it.

Q:    How long has the war been going on when we start the comic book? And how long have the heroes been active on Earth-2?

Q:    Are there any other superheroes at the time of the Apocalypse Invasion other than the five we see?

Q:    Is Catwoman/Selina Kyle still the mother of Helena Wayne in this universe? Did she survive?

Q:     On Earth-2 is Helena the only person who has held the title of Robin.

Q:     Jay Garrick’s girlfriend is named Joan. Is this Joan Williams, who shares the name of Jay’s wife in the original Earth-2 and the Post-Crisis DCU?

James Robinson has done it again. Almost 20 years ago, James Robinson wrote The Golden Age, a DC Elseworlds mini-series that took the characters of Earth-2 through the McCarthyism of the 1950s. Robinson redefined the Justice Society and All Star Squadron characters for a modern age3. This lead to Robinson’s award-winning and fan loved run on Starman.

From what I’ve seen on the internet, I’m the only person who both loves James Robinson’s Starman4 who also thinks that The Shade mini-series is lousy and not worth purchasing. So I was worried about Robinson’s work on this new vision of Earth-2. I need not have worried. I’m feeling the same tingly excitement while reading this comic book that I did when reading Starman all those years ago. The potential for this series is 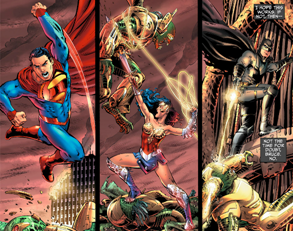 so vast that I can’t even begin to comprehend it.

The battle at the beginning of the comic book was amazing. I haven’t read too many (if any) comics that Nicola Scott has drawn, but this was exceptional work. She had to draw new costumes for Superman, Batman, and Wonder Woman, parademons, draw young versions of classic DC characters (Jay, Al, and Alan) that are somewhat recognizable to older readers, and show the devastation that the Apocalypse invasion has had on the world.

I get the impression that Robinson has been waiting his entire year to write a young Alan Scott. I’m just saying.

And when Mercury showed up in the middle of battle to talk to Diana wearing the very familiar helmet of the Earth-2 Flash, you just knew where the pieces were going to fall into place. And it works so well.

Helena talking to Batman over the radio, and calling him “Dad.” and then “Daddy”. I can handle Bruce being a father or a dad to someone, but for Helena to call him “Daddy” just about broke my heart.

It is common these days to have separate thought blocks for each character, and to color them so that you know who is speaking. However, I have never seen it done so effectively as in this book, when the focus shifts between Superman, Wonder Woman, and Batman. Just exceptional work.

There wasn’t much I didn’t like, but the conversation between Jay and Joan was really awkward. There was either too much writer exposition in that conversation, or Robinson is trying to get back at someone from his past. I mean no one talks like that. Unless Robinson wants Joan to be the coldest bitch there’s ever been on the planet. It would have been nicer if Joan was specifically trying to hurt Jay Garrick, and not just diatribe on who he is and why he’s worthless to her.

I hope that Robinson comes up with a really good reason to say why this book is titled, Earth-2 and not Justice Society. Don’t get me wrong, the title gave an extra sort of tingle when you first read about it, but if this is just the previous members of the Justice Society/All Star Squadron, then I think the book is misnamed.

Let’s hope that Robinson and Scott can keep this pace up. I can’t wait to read next month, and I can’t wait to see what other Earth-2 characters are going to be tackled next in this book.

I rarely give A+ grades, because I want something to be truly exceptional to receive that grade. Well, this is an example of something truly exceptional. I loved every digital page. The story contains the hints of the former Earth-2, and yet definitely has a new story to tell. I love that we are reading about a young Jay Garrick, Alan Scott, and Al Pratt. And Nicola Scott’s art was tremendous. It had triumph and heartbreak. And I keep finding new details hidden in the pages.

Overall Grade: 10.0 (One of the best debut issues I’ve ever read) 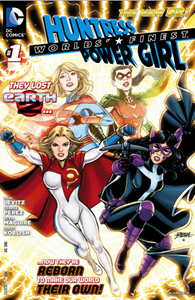 We know from the Huntress and Mister Terrific series that Huntress and Power Girl are Earth-2 refugees who are trapped on the DCnU Earth. And from the Earth-2 book, we know that they were known as Robin and Supergirl on that other Earth. But that’s all we know

This book goes back and forth between flashbacks and what is going on in the current time stream:

A:    Helena and Kara were chasing after Darkseid. So Darkseid was leading the invasion of Earth-2, so most likely this is the same Darkseid we saw in Justice League.

In 1977, Paul Levitz created the character of The Huntress, who was the daughter of The Batman and Catwoman of Earth-2. Now 35 years later, he is writing the character again, and you can tell that this character is very dear to him.

I don’t think I have ever read a comic book like this before. Even in 2012, there aren’t that many comic books that have two (or more) female superheroes as the sole lead characters of a book. And of those few books, I don’t recall ever reading a book where the relationship between the two characters was not based on conflict.

This was so refreshing of a comic book read, I almost don’t know what to do with myself. Paul Levitz has created two characters that fit together so perfectly. Power Girl and Huntress were always close in Earth-2, but as survivor from a world they can never return to, he has made them like family. You can sense how the two of them have strengthened each other through the five years that they have been trapped on Earth-1. 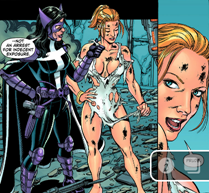 I have never read a more likeable version of Power Girl. She is confident. She is funny. She has a very warm relationship with Helena. She even is able to make jokes about her sexuality. I nearly fell out of my chair in nerdy, humorous delight when she calls Helena a prude. Is this the same Power Girl who would snarl at anyone who found her attractive? No this is not.

Because we’ve seen Helena recently in her own mini-series and that she’s not that different from the Huntress from the pre-Flashpoint DCU, she is almost downplayed. And yet she is a very compelling character, one who is quiet but yet confident. She is more accepting in making a place for herself in this world, but yet doesn’t seem to set down roots.

The differences between both girls are so well-reflected in each other. Karen is on the front cover of magazines, and Helena hides in the shadows. Their influences from Batman and Superman are so present, and yet they are not simply female offshoots of those character.

Female banter. In a comic book? I love it!

And as an English major, let me just say that the apostrophe in the name is the greatest thing EVER.

I’m not a girl6, so I’m not necessarily the best person to say this. However, I think this was the best female-forward superhero team book that I’ve read in a long time. If you know of a girl who likes comics, you should give this to her to read. Outside of Gail Simone, this is the best female positive superhero book I’ve ever read.

I have a few small criticisms:

The refreshing nature of this book, almost makes this book better than Earth-2. I missed the relationship between Huntress and Power Girl so much, and it’s like we got 25 years of it in a single issue. This was such a triumph. If Paul Levitz is able to tell large epic stories with these characters and combine it with the friendship of these two girls, then this should be a definite hit.

1 –    And they killed him without teasing it for six months or hint at a storyline called “The Death of Batman!”

2 –     Well, presumably dead… I mean this IS comic books. No one is dead unless you see a dead body, and even then only until a new writer comes on board.

3 –     Much like Darwyn Cooke did with the Silver Age in New Frontier.

5 –     Apparently Helena knows her father too well, regardless of what world.

6 –     Though my friends in the People’s Front of Judea call me Loretta.