Normally, when another one of my fellow Comic Nexus brethren reviews a comic book, I don’t write a review myself. Alternative takes are always welcome at Comic Nexus, and my ego is not so large to think that my take on a comic book is superior to anyone else’s. So, normally I would see that Michael Maillaro wrote an excellent review on X-O Manowar #1, and just write about something else. This is especially true when Michael wrote an ADVANCE REVIEW, so that we all could read the review before making a purchasing decision.

But this is not a normal situation. This is the (potential) revival of the Valiant Universe.

Back in 1992, I was in college and I wandered into my college comic book shop1 for my weekly fix. I had very few titles from my pull list that week, so I was wandering the shelves looking for something new. I stumbled across X-O Manowar #1 on the New Release rack. I saw the Valiant logo which was pretty modern, but yet reminiscent of the Gold Key logo of comic book publishers gone bye. I also noticed a few other recently released Valiant titles: Harbinger and Magnus Robot Fighter. So, I purchased it.

I’d like to tell you I was hooked immediately, but I wasn’t. But the comic book had a certain level of energy to it. So, next month X-O was on my shopping list. After a while (I don’t remember how long), I picked up a few other Valiant titles. I got hooked. The Valiant universe was so tightly woven with all of the characters naturally connected. It was very sad when the Valiant Universe that I knew and loved so much was cancelled, but what was even sadder have been the poor attempts to revive the franchise.

So, the new Valiant Entertainment sounds like they have a better plan, and here’s hoping that this leads to a triumphant return for Aric and the rest of the Valiant Universe. 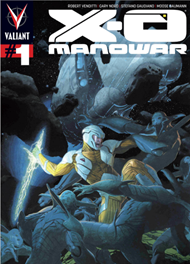 Well, in the original Valiant universe, Aric was a Visigoth who was captured and made a slave by Spider Aliens. Aric freed himself and found the alien X-O armor, which was a living armor that would attach to Aric’s body. This allowed Aric to be one of the most powerful warriors in the universe. Due to time shifting, Aric came to the 1990s Earth, where he was able to take over an evil corporation. So it combined a fish out of water story, but also made the comparisons between Aric’s barbarian ways and the customs of American business ventures in the 1990s.

Q:    Why did the aliens infiltrate the Visigoth camp? Have they infiltrated other factions as well?

Q:    Are the aliens working with the Roman army, or are they completely separate enemies to the Visigoths?

Q:    Do the alien priests really know about the Armor of Shanhara, or are they guessing?

This is solid first step by Valiant Entertainment. The pieces of the puzzle are falling into place. Expanding on the original myth and story of Aric is a really good choice, and placing Aric squarely in a specific time period of the Visigoth uprising give it a solid sense of what’s going on.

I loved that they associated the events of this comic book with a specific period of European/Roman history. I especially liked the historical facts that were described on the inside front cover. It makes me wonder what they have in mind for future issues. You almost might think that Aric is not going to be a modern age armored warrior, but one who flies around during the Roman era. Very curious.

Generally the art was very good. You can sense that Cary Nord is at ease drawing barbarians and European plains.

I thought the design of the X-O Manowar armor was really well done. It gave the right sense of tapping into the image that the old X-O fans know so well, and yet giving some sleeker lines to the armor as well.

It was a nice change to have characters who see a spaceship, and just think it’s some new enemy transport. I like that take.

Aric seems like an over-enthusiastic but exceptional warrior. Currently there are no consequences for his bull-headedness. When they attack the aliens, several of the other Visigoth warriors fall, and yet there is no mourning or concern for them. This works for a warrior in 402 AD, but not in modern times. I hope they tap into that.

It’s a nice pull into the next issue, wanting to see how Aric gets out of prison and how or why Aric is ‘worthy’ of wearing the armor.

The flaws of this comic are easier to describe than the benefits. I do not feel that this comic treaded new ground, as it mostly borrowed from other words. But you see the potential in the comic immediately, and it’s a nice pull into next month’s issue.

Overall Grade: 8.0 (A welcome return for an old friend)

2 – This is more of a strategic complaint than a critical one.

3 – Like Scott Snyder’s Swamp Thing or one of the recent Transformers relaunches (the DreamWave one I think).

4 – Isn’t that the fourth book in the original series by Terry Brooks?