Traditionally, I always felt that Annuals were totally geared towards the younger audience. My memory was that Annuals came out during the summer when the younger demographic typically has more money in their pockets from summer jobs or household chores that were more advanced than just emptying the wastebaskets. As such, the comic book industry would make you spend more of that hard earned money on double-sized, double-priced issues. As a young kid I would get excited as this thought.

When I got to my early 20s, I was more annoyed by Annuals, as usually I had to pay extra money for substandard artwork, rushed crossovers, lame backup stories, and filler material that I didn’t care about1 . Yes, sometimes this material allowed for budding writers and artists to get some fill-in work and pad their resume, but I would rather do that for a normal comic book price rather than pay extra for it.

Over the last 10-15 years or so, the role of the comic book Annual has diminished. It seems that annuals are only released if there is a real plan or purpose to them. 2 In fact, I cannot remember the last time that I read an Annual.3

This year, the Batman people have decided to create a Batman Annual, and tie it into the Night of Owls crossover. So the book certainly has a purpose, but is that enough to make it interesting. 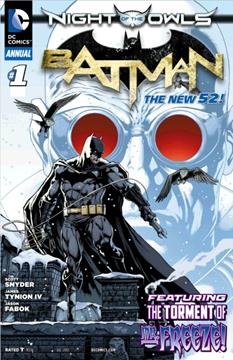 This comic mostly ties into the events that happened in Red Hood and the Outlaws #9. If another comic book made a connection between Mr. Freeze and the Court of Owls, I am unaware of it. The timeline places it sometime after the events of Batman #9 in the Court of Owls crossover.

I reviewed the other Night of Owls stories in the following reviews:

A:     Victor Fries is a former employee of Wayne Enterprises where he was fired from working in the Cryonics division after he continued to work on his own experiments.

A:     In the DCnU, Victor Fries never met his ‘wife’ Nora. She is Nora Fields who was put into cryogenic stasis in 1968, and Victor became infatuated with her when he wrote a thesis on her.

Wow, there’s too many ways to review this comic book: First as a regular comic book story; Second as an overpriced comic book story; Third as a chapter in the Night of Owls crossover; Fourth as collaboration between Scott Snyder and James Tynion IV.

As a regular comic book this is really excellent. This is basically the Mister Freeze origin story for the DCnU that directly ties the background of Victor Fries with Bruce Wayne in a very logical, interesting way. I liked how Freeze is characterized, and I enjoyed the reveal of his wife.

I didn’t like that Freeze is a human being who can snap the necks of his captors without his ‘powers’. That seemed very out-of-character with who he has been, and what his powers have been, traditionally.

And I don’t understand how Freeze can be captured in Red Hood and the Outlaws #9, escape from his captors in Arkham Asylum in Batman Annual #1, and have the inmates riot against the Talons in Detective Comics #9. That’s a lot of happenings in a single night. I have to review the issues to see how that takes place.

The two questionable missteps are the following:

Hey, I know I’m nitpicking and you know I’m nitpicking. And yes, it’s almost impossible to coordinate every plot point across a crossover, especially if you add timestamps. But they were the ones who added the timestamps. They had to know that one bored comic book geek was going to timeline all of the Night of Owls events.

Was this a good comic book for the price? I mean this felt like as much story as you would get in a two-parter in a regular title, and as a story it definitely worked better without a forced cliffhanger or unnecessary break. However, I didn’t find the story as crucial as I do in the regular title. Yes, it provided good insight into the character of Mister Freeze, but I wasn’t sure it was necessary.

As a Night of Owls crossover story, it’s fairly unnecessary. It seems more like an epilogue to the story than a key chapter to it. I was hoping for more information on how the Court of Owls contacted Victor, or maybe how he turned to them for financing after being booted from Wayne Enterprises. There was a lot of ways to better tie the Court of Owls into the story, but I didn’t find it here.

Most of the issues in this Night of Owls crossover have been this way. Decent to very good stories that have the 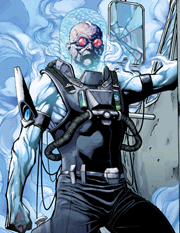 backdrop of the Night of Owls, but none (outside of Batman and Nightwing) are important chapters in the overall story. This, like many of the others, is an interesting interlude.

As an Annual, there’s no two ways about it, it excels. This annual reminded me of the classic Batman annuals of the early 90s that gave a larger spotlight on a particular villain4. I can’t remember the last Annual that I enjoyed as much as I enjoyed this one. It is really well done.

Additionally, the artwork was really superb. Jason Fabok isn’t necessarily an unknown artist, as he has penciled a few issues of Batman: The Dark Knight, but this is the first time that I have seen his work. I thought he did a really masterful job, especially with someone as complex and interesting as Mister Freeze.

As a side note, I was totally confused by the last page. I don’t understand what made Victor push his mom into the ice. I get that he wanted to preserve her, but was he trying to see if it would work again or was he saving her because she was damaged? The ‘apple’ pattern of blood on her hands didn’t make sense to me.

This was very well done overall.

I really enjoyed this, but once again it felt like I was sold a bill of goods that I didn’t receive. A great Mr. Freeze story, but it didn’t add much to the Night of Owls. So that does downgrade it for me.

Overall Grade: 8.5 (Good work but unnecessary for the crossover)

1 – After a while, I got bored with pin-up artwork and my third Who’s Who file on Donna Troy.

2 – Probably because, given the market, no one wants to release an overpriced annual that sells 50% of what the standard title normally brings in.

3 – You can certainly tell the importance of annuals, as oftentimes they aren’t even collected in Graphic Novels, as they are usually outside of the standard story arc.

4 – The somewhat classic Batman Annual #14 comes to mind with Two-Face as the main protagonist.