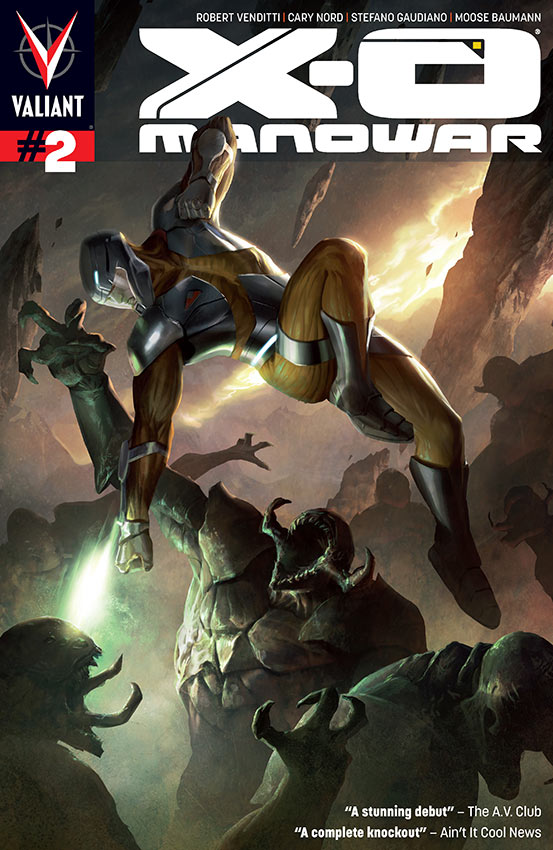 I guess Valiant enjoyed my advance review of X-O Manowar 1, since they sent us over an advance copy of issue 2 to review too. By the way, I can honestly say that X-O Manowar #1 was the first time I ever got an advanced copy of a book and still made sure I bought it as soon as it came out.

I actually come to this review much more educated than I was when I wrote my earlier review. I enjoyed X-O Manowar #1 so much, I went back and started reading every original Valiant comic I can get my hands on. I will likely do a column on them later on, but I do want to say that they hold up very well 20 years later, which isn’t true of most comics.

On with my review!

Summary (contains spoilers): After Aric and Gafti’s attempted escape from the Vine’s ship in the last issue, they are being held without food and water. They are soon assigned to be slaves working inside the Vine’as vast gardens. It’s never quite clear what the function of these gardens are, but the Vine seem to consider them to be sacred. Dead slaves are used to feed the plants, which the Vine refers to as “the Offspring.” One of the slaves eats one of the fruits of the garden, which causes the Vine to freak out. In attempting to defend the slave, Aric gets his hand sliced off by one of the guards. He manages to bandage himself up, and survive for several years.

The whole time, Aric is plotting an escape. Someone known as the Mapmaker (in the original, he was a slave who was trusted by the Spider Aliens, we never get to see the Mapmaker in this issue) has provided Aric with a map to the ship’s armory. Aric leads the slaves in a rebellion, and even though they are outnumbered and outgunned, the slaves manage to fight their way to the armory, and barricade themselves in. Inside, they are surprised to find that there is only one weapon. A sphere that floats in the air. 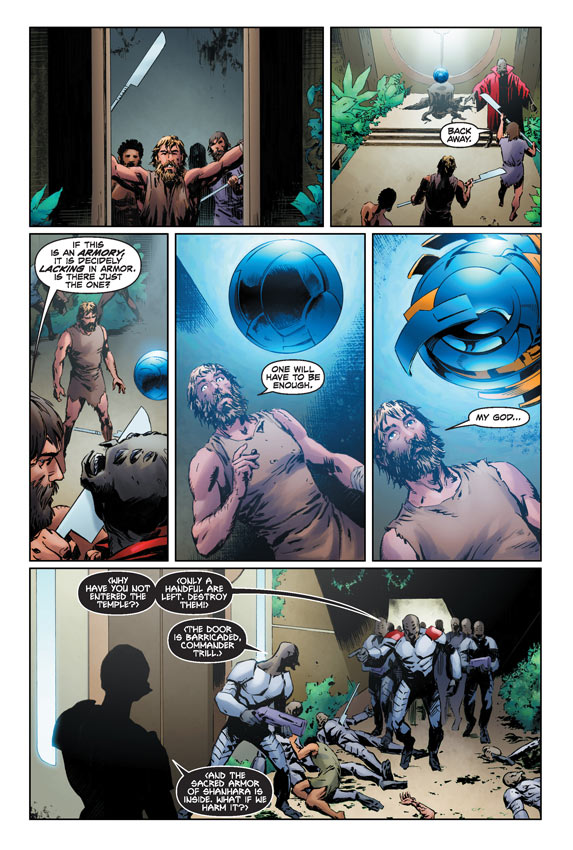 When Aric touches the sphere, it turns into an armor, wrapping around him. At first, it seems like the armor killed him like it did the Vine who tried to wear it in the first issue, but he quickly rises, and is able to dispatch the Vine easily. One of the Vine says, “Shanhara has chosen a human!”

Review: I try not to complain too much about free comics, but I will admit that I was kind of hoping Valiant would have sent us an advance copy of Harbinger #1, not just X-O Manowar #2. But that really is a petty complaint. Getting to read and review an awesome comic several days before it hits the shelves is never something to complain about.  That said, I will be first in line Wednesday morning to buy Harbinger #1 and X-O #2 from Comixology.

In my review for issue 1, I had concerns that Valiant’s return would be overshadowed by a lot of the other big events going on. After the first two issues, I can say that X-O Manowar was FAR BETTER than Night of the Owls and the Culling (I have no interest in Avengers Vs X-Men, so can’t speak for it’s quality). Early response and sales figures seem to be pretty solid, and I really hope that Valiant will continue to grow.

There really is a lot to like about this book. Once again, Venditti and Nord are able to pack a lot into the comic. We start to get a lot more answers in this one, as Aric begins to understand the nature of his captors. There are still a lot of mysteries going on, but never too much that they overwhelm the reader. I should also mention that I like the Vine more than the sort of generic “Spider Aliens” who were bad guys in the original Valiant series. The Vine seem to have a real unique culture, and I really want to learn more about them.  I also like that Aric seems far more intelligent here than in the early issues of the original series.  I felt a great disconnect from Aric in the original series at times, but here, he comes off as much easier to relate to.

Aric’s rebellion seems doomed to fail, but as a reader you can’t help but cheer him on. It sort of reminded me of Gladiator. Even knowing what is going to happen next, when he reaches the armory and you only find the X-O orb, you feel a certain disappointment mixed with a eagerness to see  what will happen when he dons the X-O armor.  I actually cringed when Aric lost his hand, and later on when he gets his revenge, I felt a real sense of satisfaction.  The whole comics manipulates the reader brilliantly.

Cory Nord’s art is perfect for the action and violence in this issue. All of the action scenes in both issues really gave a constant sense of scope. Whether it was the vast battles between the Visigoths and Romans or the most contain battle between the Vine and the slaves, it is always keyed perfectly to create an emotional response in the reader. 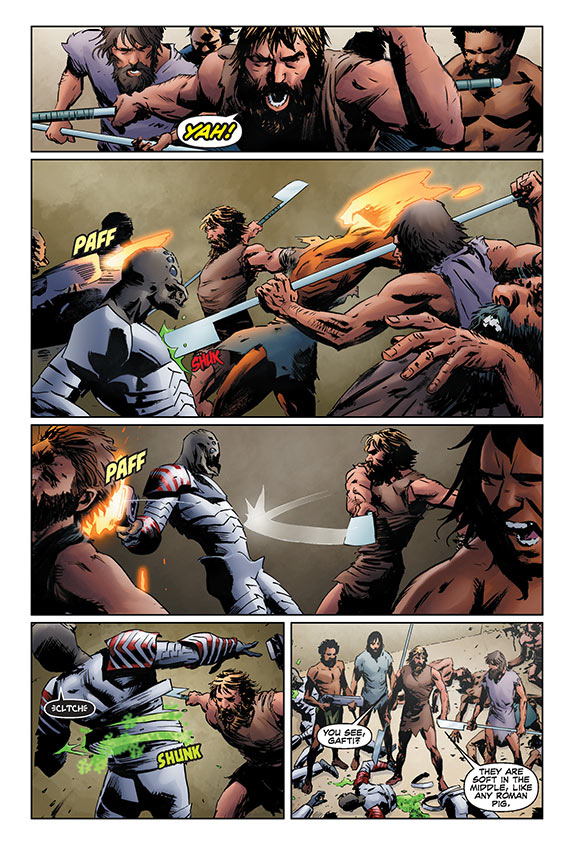 Really, there is just about nothing negative I can say about this comic. X-O is very well written with compelling characters on all sides; Nord’s art amps up the emotion constantly. It was nice to see an origin story that gets the hero in his armor in two issues, and still gave us tons of story and setting to feel connected to.  HIGHLY RECOMMENDED!

By the way, this makes two months in a row, X-O Manowar has left everything else I read in the dust.   That said, it’s going to have a lot of competition this week from Harbinger, which is one of my favorite of the original Valiant series. Definitely a good week to be a Valiant fan.

Final Score: 9.0 – I don’t think I’ve ever read a comic that I felt more emotionally connected to. Venditti and Nord really have total control of the reader’s emotions…those evil bastards!