Fans eager for the upcoming The Carol Burnett Show – The Ultimate Collection are getting even more in the boxset when Time-Life ships it on August 6. They’re now including a long interview with Tim Conway and Harvey Korman remembering their time on the show. There will also be a solo Korman chat. You can pretty much cancel your vacation plans in August to absorb all the comedy goodness. Here’s the press release from Time-Life: 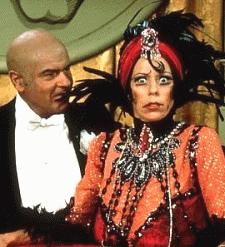 FAIRFAX, VA – JULY 9, 2012 – On April 20, 2004, Harvey Korman and Tim Conway conducted an interview at the Academy of Television Arts & Sciences in Los Angeles. They talked for 90 minutes about their legendary antics on The Carol Burnett Show, but the interview has rarely been seen by the general public—until now. This emotional and revealing interview will now be included—in its entirety—as part of the bonus features for Time Life’s upcoming DVD release, The Carol Burnett Show—The Ultimate Collection.

In addition to the 90-minute session with Tim Conway, Harvey Korman also did a separate 90-minute solo interview at the Museum of TV and Radio, and that too will be included in The Ultimate Collection, which will now boast a staggering 20-plus hours of Bonus Features. Check out a sneak peek of the fantastic interview right here.

All 50 episodes in The Ultimate Collection were hand-picked by Carol Burnett and include the most acclaimed and beloved episodes from the show’s legendary 11-year run. Highlights include:

The season 10 classic episode with the two-part sketch “Went With the Wind,” with guest Dinah Shore.

Several episodes featuring “As The Stomach Turns” sketches, including Season 11’s Close Encounters of the Third Kind parody (with Steve Martin & Betty White) and The Exorcist parody from Season 7 (with Bernadette Peters).

The season 7 program from the Sydney, Australia Opera House—the only episode of The Carol Burnett Show from outside the U.S.

Carol does her best Joan Crawford in a “Mildred Fierce” sketch from Season 10. And in a Season 8 episode with guests Phil Silvers and Jean Stapleton, Carol does a great Cher take-off

One of Carol’s favorite sketches, “The Pail” is a highlight of a Season 9 episode that also features Bernadette Peters. And another Carol fave, “Snow White—15 Years Later” (Season 6) is also included.

Several episodes featuring Carol as Stella Toddler are included, including “The Hospital” and “The Maiden and the Mugger” (both from Season 9).

All told The Ultimate Collection now boasts 12 featurettes; 20 interviews, in addition to the Harvey Korman treasure; the Season 10 Guest Book and the 20-page Memory Book.

THE CAROL BURNETT SHOW: THE ULTIMATE COLLECTION is now available for pre-order at www.CarolOnDVD.com and will ship to customers on August 6.