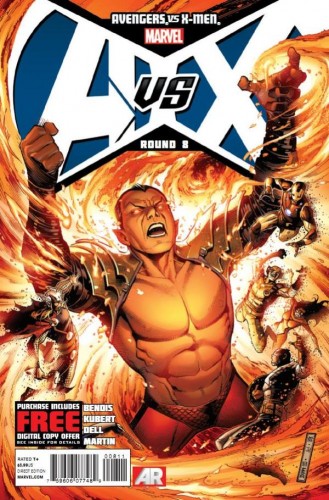 Namor wages complete and utter great massive freaking war on Wakanda. I’m talking tsunami waves in the middle of Africa as well as an Atlantean army riding on the backs of the nastiest of nasty looking sea creatures. He just rips the most advanced city on the continent to pieces in his uber powered rage against the Avengers. Don’t forget, last issue Wanda disassembled him into cubes to teleport him away. He’s not happy. Namor fights the Avengers. All of them…and he whoops the crap out of most of them. And then Wanda shows up. We find out just what exactly happens when she takes on someone with Phoenix powers, and the Phoenix Five are met with the most potentially threatening voice of them all. Just as the Avengers realize…well, that would be telling.

Of course Captain America would be licking his chops at an excuse to blame something like this on Scott Summers. He’s been a war hungry dick since the mini started, why change it now? I mean, at no point in all of the years that he’s known Namor has the King of Atlantis EVER gone off the reservation and gone into business for himself. That NEVER happened under Cap’s watch. Save for all the time it did.

Does anybody else remember how Beast quit two issues ago? Like, how he made a deal out of the fact that this entire situation was out of control and he wasn’t going to kill his best friend for making the world a better place? Has anybody else noticed him showing up in both issues since, both times fighting without dialog for the Avengers?

I’d rather Captain America be in the chalk outline than Cyclops at this point. One of them is dealing with a giant power boost and still trying to help the world, the other is sacrificing everything and everyone that gets between him and his enemy so he can eventually claim victory.

I’d also accept it being Emma at this point, she’s a manipulative little bitch. Man, that’s a good thing, classic Emma is great.