Whether it’s the critical fans, exposure of the business, realizing that their favorite wrestlers aren’t the men they portray on TV,  or the dirt sheets that reveal spoilers, many fans believe the internet has ruined their love for the business. Personally,  I’ve become a bigger fan because of the internet of professional wrestling, but I of course carry a lot of bias because I am able to voice my opinion every week about wrestling to a worldwide audience. It’s uncommon to go to your average coffee shop and have a conversation with a stranger about WWE than a sports game, movie or even a TV show.  The reason is wrestling fans aren’t the most voiced fans out there, but the internet has allowed us to come together  and discuss everything.  But I still cannot deny that the internet has made  me a more critical observer, which has made marking out almost obsolete.

Back when I started wrestling, I would quite frankly mark out on every show if Stone Cold Steve Austin won. I was never the kind to jump up and down, but inside I felt warmer than a hot fire on a cold day. There are  some rare scenarios where I do become overly joyful for something to happen, one of which that happened very recently. The scenario I am talking about is Brock Lesnar’s return. Everyone who was a wrestling fan for the most part knew Lesnar signed a deal with the WWE, but nobody expected when he’d show up, though. Some believed that he’d be at Wrestlemania, while others believed they would wait until either Summerslam or next Wrestlemania.

At the end the Raw that followed Wrestlemania, Cena called out the Rock right after  the entire arena chanted for Brock Lesnar. The long wait for the Rock foreshadowed that he wasn’t, leaving me in suspense and hope that it was Lesnar. Once I heard his theme, I said to my friend, “Wow, they pulled the trigger!” To cap the moment off,  he suckered Cena into an F-5 and kicked his hat like a football. It was truly a segment that a fan can only experience once in a lifetime and one that someone can re-experience again and again. Just when it couldn’t get better, the WWE put together one of their best video packages ever and Lesnar cut the best promos ever about how he’s going to legitimize the company, explained his actions, and showcased how much of an asshole he truly is.

“I’m not a superstar, I’m an ass kicker. I am Brock Lesnar, that’s it. I left the WWE, everybody thought, here’s a guy, there’s no way in hell he’s gonna make it in the UFC, but I climbed that mountain and became UFC Heavyweight Champion of the world and I proved everybody wrong. Why did I come back to the WWE? This isn’t a feel-good moment. This isn’t ‘Oh I miss coming through the curtain, I miss all the fans.’ At the end of the day, I don’t care about anybody but Brock Lesnar. For me this is strictly business. We need a guy to legitimize this company and Brock Lesnar is that guy. We’re tired of John Cena’s bullcrap. John Cena is not the real guy. The only reason John is in the spot that he’s in is because I left. If I was still around for the last eight years, John Cena’s the guy that’d be carrying my bags into the building. There’s nothing about Brock Lesnar that’s fake. It was very evident last week when I took John Cena down and busted his mouth open. This is real. What’s running through John Cena’s mind? I don’t give a crap what’s running through his mind. What’s more important is what’s running down his leg. Piss. The guy’s scared. Shitting his pants is what he’s doing. This isn’t a wrestling match on April 29, this is an ‘Extreme Rules’ match. I got one objective in mind: Utter freakin’ chaos. Bring the pain to John Cena. I’m comin’ for a fight John Cena. What makes me happy? Beatin’ people up, that makes me happy.”-Brock Lesnar.

Heading into Cena and Lesnar’s epic encounter, the majority believed there was only one irrational thing to do: have Lesnar lose to Cena. Frankly, it didn’t matter that much how Lesnar won as long as he did. Instead, the WWE paid Lesnar 5 million dollars for a limited amount of dates to put over the top figurehead of the company,  who’s  reached the peak of popularity a long time ago. But because the match was so well-done, I felt like there had to be something to justify it and in hindsight there was. The reasons why Lesnar lost were because he became overzealous and Cena was lucky. Furthermore, Lesnar hurt Cena so badly that he announced that he was taking a league of absence, which made it feel like a rematch down the line. So it wasn’t like all hope was lost.

The next night  things appeared to be improving: Lesnar broke Triple H’s arm and Cena was going to give a farewell on TV. Then, I heard Big Johnny say that he’ll name John Cena’s opponent at Over The Limit, but I felt like there was no way the WWE could be that stupid. As a result, I eagerly watched John Cena’s promo. He rambled on about how there’s a difference between being hurt and injured and  other shit that foreshadowed that he wasn’t going anywhere. That led Big Johnny coming out to name Cena’s opponent at Over The Limit. We found out that Cena would be facing Johnny and that led to a god-awful match where the Big Show turned on Cena, which fooled nobody.

To recap, Cena, who needed time off to heal and reform his gimmick, stayed on TV to feud with the general manager and someone he has feuded with a million times (and never had a good match with) instead of taking time off to help Lesnar’s dominance feel more believable. Oh, and I also read that Lesnar wasn’t going to get his rematch.  The point was just to put their figurehead over.

Last Hope:
Because of Lesnar’s limited dates, Paul Heyman stepped in to do his dirty work. In fact, it was the best move WWE could’ve possibly made. The only flaw that Lesnar has that’s noticeable is his talking ability, something Heyman excels at.  The slow-roasted (at least when it comes to these days) build to Summerslam wasn’t lighting the world on fire, but it was keeping the story moving. On the 1,000 Raw, it began to ignite, as both HHH and Heyman brought their a-games by delivering  a well-done segment. Stephanie McMahon contributed to the segment, even if it took personal heat with Heyman to  deliver a promo that wasn’t contrived for once.
As things became more dramatic after Steph slapped Heyman, he passionately delivered a bombshell where he said to Stephanie that she got her wish to see her husband get hurt (which portrayed Heyman as this evil bastard and made it feel as if  Mr and Mrs. HHH bit off more than they can chew). Awesome! As Stephanie was kicking Heyman’s ass, Lesnar finally came out and Cole shouted, “HERE COMES THE (MOTHER FUCKING) PAIN!!!!”. Intensely,Lesnar threw shoulder blocks into Triple H’s midsection. Out of desperation, H made his comeback and then both intensely threw strikes back and forth until Triple H started to get the better of Lesnar. Then the what seemed impossible happened: Triple H clotheslined Brock Lesnar over the top-rope while Heyman looks on stunned and like a buffoon. So………
TRIPLE H BEAT A  FORMER MMA FIGHTER IN A BRAWL AND LESNAR GOT HIS COMEUPPANCE FOR BREAKING HIS ARM~!!!!!! 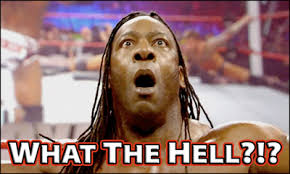 The WWE struck gold when they signed Brock Lesnar to a deal, as there isn’t anyone on this planet that has the presence for the business  and is already a huge moneymaker. The price-tag for Lesnar was high, but they still could’ve easily made oodles of profit off him and then, hopefully, signed a lengthier deal. Instead, they’ve pissed him off by deceiving him to the point where he actually negotiated with Dana White. They’ve also absurdly wasted a lot of his dates. The feud with John Cena only needed his return, that ass-kicking promo, and the match. The audience didn’t need to see Lesnar attack Josh Matthews, interfere in Cena’s  match against Otunga just to kick him in the balls, or have a long winded contract signing that became void in a week. Before someone goes there, they could’ve done something else to set up the Triple H match. Those three things didn’t make people say now I’m buying the PPV!  And the feud with Triple only needed an appearance at the 1,00th Raw and then Summerslam. They could’ve done something like Lesnar giving Stephanie McMahon an F-5, which would’ve created enough heat and anticipation for the match. And don’t give me the man on women violence BS story, either, because they should stop being so timid about their reputation if that’s why. There are women being beaten, raped and killed all over TV. So give me a break.  But at least there’s going to be a Brock Lesnar DVD soon. That’ll get WWE their money’s worth.

Ultimately, Lesnar came in as someone who was supposed to legitimize the WWE.  So far, he hasn’t done anything but look weak and thus has lost his dominant aura. The WWE can put c-list celebrities with no fighting backgrounds over their top-stars,  but they cannot put Lesnar over them for some reason. Everything about Lesnar is refreshing  from his hybrid, MMA-esque style, the way he carries himself, to his dominant figure. They could’ve done something across the lines of bitter Heyman trying to conquer WWE by using an his uber-heel as his henchman and then had Undertaker, the most loyal  wrestler in the company, end Heyman and Lesnar’s reign of terror at Wrestlemania. The WWE basically had commissioner Gordan defeat Bane  because they didn’t want Gordan to look weak and then had Bane get out of dodge because Batman got the upper hand. I don’t know if WWE is too conservative or just don’t understand the formula for good vs evil, but maybe the WWE creative staff needs to watch more superhero or Rocky movies to understand the concept. When the protagonists are invisible, the antagonists are irrelevant. And when you give your core audience everything they want to see, they become tired of the lack of suspense and doubt. For the most part, I’m enjoying what WWE has done the past two weeks and I’m still looking forward to the match from at least an in-ring standpoint, but there’s no way of defending this up-to-this-point failure. They’ve turned Brock Lesnar into just another heel on the roster, one that loses to the top star, hides, and then runs away after losing a fight. Vader wasn’t even this poorly booked during his  WWE run. There’s a possibility of this Lesnar situation being fixed, and one of the few solutions that might fix it is if Lesnar practically kills Triple H to the point where he’s taken by ambulance out of the building . Knowing how WWE manages things similar to this, I doubt they’d ever do that…..because “how could Triple H’s credibility ever recover from that!?” is in all likelihood their thought-process (albeit he’s pushing 45, is part time, and has more of a backstage role).  What they’ll most likely end doing (if Lesnar does win, which is still up in the air) is have Lesnar win by Heyman’s interference, which would mean they’re booking him even more as a  paint-by-the-numbers heel (when he should be  more superior than that).