With the fight with Brother Blood over with, the Ravagers needed a place to rest. Tired, weary, one member seemingly killed, but Fairchild is promising them a safehouse run by an old friend. Now, the Gen 13 fan in me immediately assumed it would be John Lynch. I didn’t expect who we got, however. 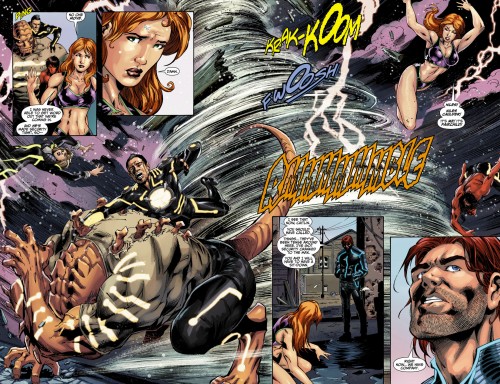 Niles Caulder, who may sound more familiar than he looks, is the leader of the Doom Patrol. He’s also traditionally in a wheelchair, which I would rag on incredibly hard like I did when Oracle got out of the chair, but my gut tells me that he’s not long for walking. I imagine we’ll see him crippled as we see a new Doom Patrol rise up in the New 52. Fitting to have happen in this book now that Red Beast Boy is on the team.