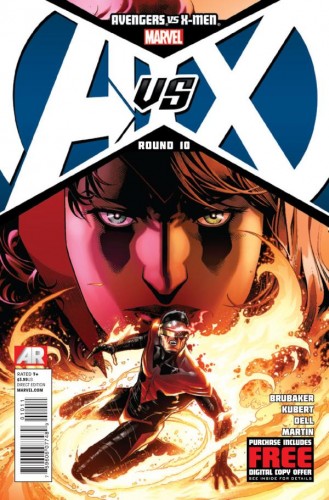 Despite seemingly being the only good Phoenix since the Phoenix Five came about, Scott opens this issue immediately being the bad guy and attacking people as he tries to steal Hope for himself. Iron Fist tries and fails to fight Cyclops, but Iron Man tags in to keep him busy while Hope goes for a run. Meanwhile Xavier chooses his side despite that it was already pretty clear what with there where he is and who he is with, and what he just did. Then you’ve got Emma forcing all the X-Men to bow to her because she’s a Goddess now, and Magneto doesn’t like it so she reminds him which of them is more powerful. He’s not pleased with that.

Scott continues to tear apart any and every Avengers that goes after him in K’un L’un up until Hope rides in on a dragon. Her copycat powers start to mix and match and all of the sudden she finds the right combination to stop a Phoenix. This means Scott wants either more power or a partner, while the Avengers are ready to celebrate finally being able to do something.

And then there’s Magneto.

Is Captain America crying in Russia? There’s no crying in Russia! No, seriously, the image is just weird. Like he’s crying with joy that Xavier decided that the X-Men are evil.

Given that this series has more or less declared “anything relating to the Phoenix is evil” makes me wonder how many of the writers remembered the source of Rachel Grey’s powers. Also, it makes me wonder how many of them know that the character not only exists but has been parts of the crossover thanks to Christos Gage and Jason Aaron…alright, so ONE of these guys definitely knows that being a Phoenix doesn’t immediately make you evil.

I would have talked the Infinite Comics issue, but I have to load up to the very end of the digital copy I got by putting my code in, because for some reason Marvel didn’t just hand out the free Infinite Comics voucher and chose to just stick it at the end of the issue. The designated issue? Much better idea. I wouldn’t have even known that I’ll have to go look through the back of my digital issue if I hadn’t TAKEN THE QUESTION TO GOOGLE.

How do you save the world? Apparently you turn Hope into the Scarlet Fist.

Great usage of the Watcher in this series. Very fitting, very classic.

So Scott versus Emma next issue? Two issues left? What are the odds this book ends with Wolverine killing Cyclops and then being named a hero for saving the world from the guy that was making it a better place? I’d much rather see Scott take on Xavier and Magneto. That one would be new and fresh and interesting and not just good for a cover that forces a sales jump.

How did it take ten issues for someone to remember that Hope isn’t a helpless little child that needs to be taken care of? She was raised by Cable to be able to more than take care of herself without any powers, and here she is, with powers, with her only non-helpless moment to date being what she did to Wolverine up until she hits Scott in this issue.

This book really does need a lot more Hope and a lot less mystic kung-fu. Because somehow Iron Fist is more important to this series than Hope is, and her entire existence was supposed to be for this moment.