The Books You Should Buy: 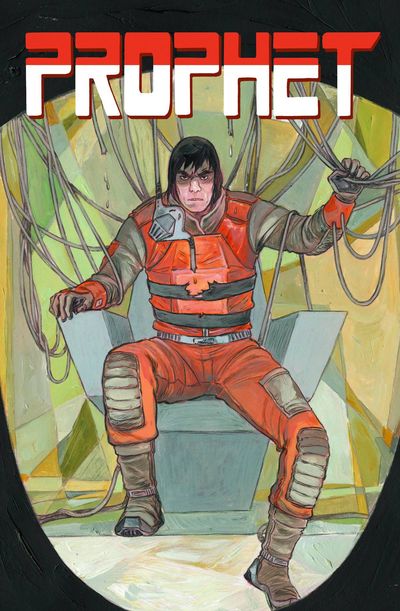 2012 has been a year of great advancement and change in the world of independent comics.  The Walking Dead was the number one comic book the month its 100th issue was published.  New titles like Saga, The Manhattan Projects, and Fatale have surpassed all sales expectations, and have returned to press for second, third, and even fourth printings.  There is more diversity and quality coming out of Image Comics than at any time previous.  On a personal note, I’m now buying as many Image books each month as I am DC.  Amid the fantastic launches of the last year, though, one book has stood out in terms of its originality and general awesome-ness, although it has not received the same kind of recognition or sales.  That book is Prophet.

I can barely remember Prophet starting out as a Rob Liefeld-created title back in the days when I realized that I don’t like Liefeld’s work at all.  I bought the first issue, which was drawn by Steven Platt, and I couldn’t tell you anything more about it than that.  Had you told me that a relaunch of that title would become one of my favourite books of the year, I would have laughed at you.  But then Liefeld gave the property to Brandon Graham to play with, and I was immediately blown away.

In the first story arc (which took up three issues and was drawn by Simon Roy), Graham has Prophet awaken on Earth some great distance into the future.  Things are unrecognizable now – there are strange creatures and societies living on the surface, and there is little evidence left that humans ever lived there.  Prophet has some sort of mission to complete, and he travels across the odd new landscape, working his way towards his goal.  Graham’s writing is sharp and exciting, and Roy’s art is terrific. After that arc, subsequent stories are centred on various other Prophets who wake up in other parts of the universe (one has a tail), and have similar missions to complete.  Apparently, they are trying to restore the Earth Empire.

Graham is taking his time explaining what this all is leading up to, but because each individual issue is so good, you find you don’t really care how long it takes to get to the point.  Farel Dalrymple draws an issue (which in itself makes it an event), as does Graham himself. This book is perfect for someone who grew up on or misses titles like Heavy Metal (although there is little sex here) or the work of Moebius.  There is a looseness about this series and its grasp of reality that is really enjoyable.  This first trade is only $10 – you should really check it out. 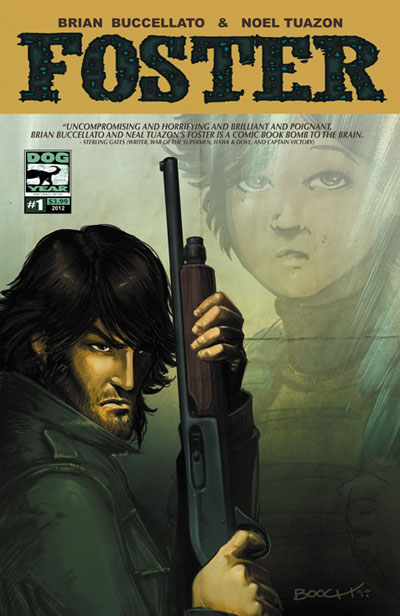 I usually only write about trade paperbacks or new graphic novels in this column,but there is a new series launching today that I’ve been pretty excited about.  Foster is a self-published book by Flash co-writer Brian Buccellato and Tumor

artist Noel Tuazon.  I picked up the first two issues in a special convention edition at TCAF this year, and I really enjoyed them.

Foster is set in a city that is more or less an amalgam of broke 70s American cities, in the days before cellphones and personal computing.  It’s about a guy who ends up looking after his next door neighbours son when she disappears.  This isn’t unusual at first (she’s a junkie, and they used to date) but when large menacing men start looking for the kid, things go bad quickly.

This book introduces the idea of Dwellers, the last surviving Neanderthals, who have been living in secret in our society.  There is a reason why they want this particular kid, and they’re pretty aggressive.

The book is a nice blend of suspense and decent character writing, with some very good art.  I found I got into the story pretty quickly, and have been waiting for the chance to read the next issue.  If your comic store has ordered it, check it out.  If they haven’t, ask them to.

The Book You Should Kickstart 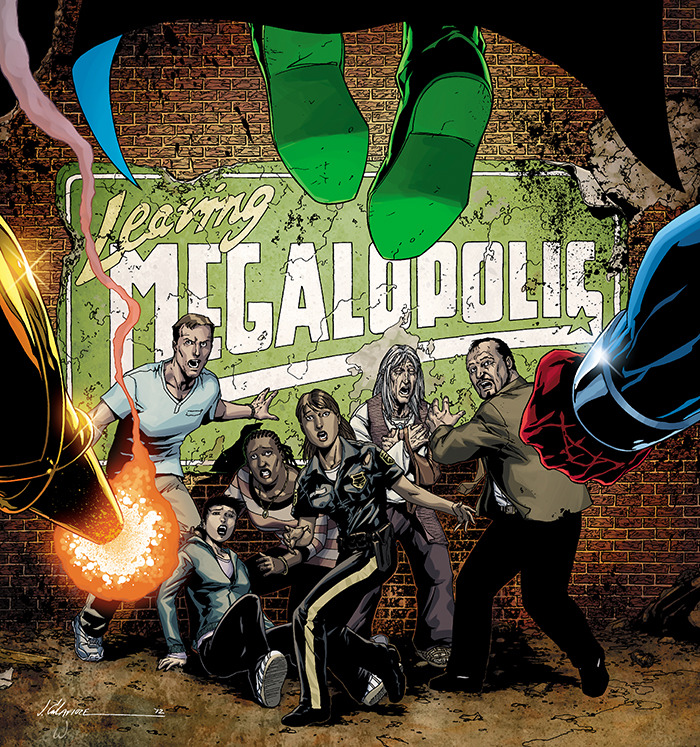 The other day, I made my first Kickstarter pledge, for Leaving Megaopolis (click to pledge), an upcoming graphic novel from Gail Simone and Jim Calafiore.  When DC relaunched a year ago, they canceled their best monthly series, Secret Six.  Simone and Calafiore were killing this book; every issue was a delight to read – a mix of very dark humour and strong characterization.  I’ve liked Calafiore’s work since he drew Alpha Flight a long, long time ago, and am usually a big Gail Simone fan (although her Batgirl has not worked for me, and I dropped it a while ago).

The idea of these two working together again is pretty exciting, and something I’m happy to support.  Here’s how they describe the project:

LEAVING MEGALOPOLIS is a thrilling, original 80 page graphic novel of suspense and terror in a superhero universe gone horribly wrong, where a small band of survivors face the horror of both their formerly beloved protectors, and the dark secrets within themselves. Featuring the creative talents of writer Gail Simone and artist Jim Calafiore this is a story of violence, fear, hope and –if they’re lucky– survival.

LEAVING MEGALOPOLIS will be brought to you by the team behind DC Comics’ critical smash, SECRET SIX. IGN.COM called the final issue of Secret Six, “the best single comic issue of 2011,” and in this dark ride of a story, we go even wilder! LEAVING MEGALOPOLIS is a journey, by two professional creators, with no holds barred and no limits imposed. Our groundbreaking work on SECRET SIX was only the beginning. If you thought that was dark…

I get a bit of a Welcome to Tranquility vibe from this series, without all the old people (and if you haven’t read Simone’s excellent Wildstorm series, you should).  The book is inexpensive – $15 for Americans, and $20 for us Canadians (and Mexicans).
So, what would you buy were money no object?
Share on Facebook Share on Twitter Share on Reddit Share on Email