Green Lantern Spoilers: The More Things Change, The More They Stay The Same

Look at Green Lantern in the New 52, not just any one character, but the franchise as a whole. All four Earth born Green Lantern’s from before the relaunch are still around. Hal still went crazy with Parallax and destroyed the Corps, which lead to Kyle Rayner being the sole Green Lantern for the span of a year or so before bringing the Corps back. Then, more or less, the entire last volume of Green Lantern fits in that year between Kyle and present.

So despite the younger version of Hal and the new looks to the costumes, nothing really changed about Green Lantern.

Now, my real issue has always rallied around Kyle, and how well his origin would work out in the new canon. After all, there is no longer a Major Force to kill his girlfriend and stuff her in his fridge, just as there is no longer an Alan Scott to help guide him, or a Donna Troy or Jade to date. New Guardians #0, believe it or not, featured no origin story for its lead character, making it one of the few titles last month to do such a thing. Really, the closest thing we had gotten to Kyle’s origin in the New 52 was in the first issue where he apparently received his ring in New York instead of Los Angeles. But again, world with no Donna Troy, no Jade, no Alan Scott, no Wally West, no Connor Hawke; the list of characters Kyle came up with and around is completely gone.

New Guardians this week brings bits of his origin back in to play, as Atrocitus tries to incite Kyle’s rage so he can master the red spectrum, and he does so by trying to spark Kyle’s rage by reminding him of his loss. So the issue spends its first few pages reintroducing us to the most important woman in Kyle Rayner’s life. 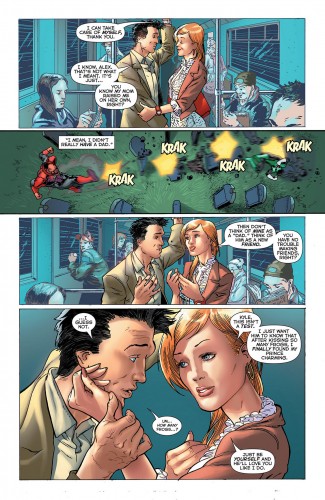 Alex who he loved, who he devoted himself to, who died because of him. 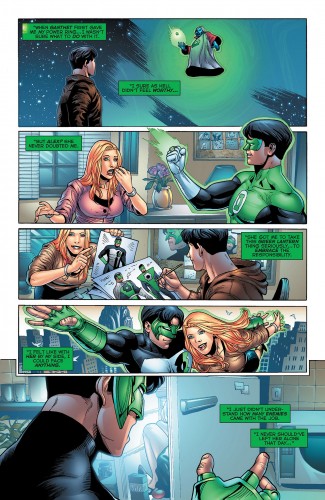 She may not have been a victim of Major Force, but she still found her way into the infamous refrigerator of doom.

So no real change there, save for the villain. Kyle still loses the most important person in his life to a horrible act of violence that helped propel Gail Simone into the industry, and our hearts, as she was not at all cool with the severity of the violence against women in comics. 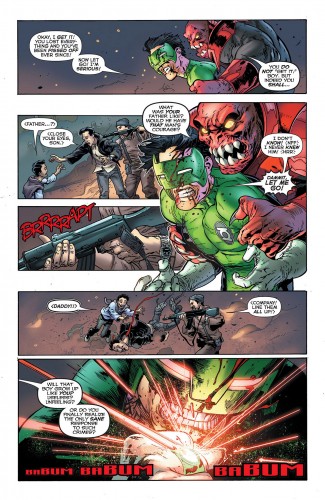 Something like Kyle Rayner seemingly no longer knowing his dad, whom he met back towards the end of Judd Winick’s run on Green Lantern, and who hasn’t been seen since.

Though that’s a small loss when you consider how minor of a role Gabriel Vasquez played, though I do still think the Power of Ion trade that featured their first meeting to be a must read for Kyle Rayner fans.

DC Comics & Batman / Superman: World’s Finest #3 Spoilers & Review: Who Is The Devil You Do NOT Know?