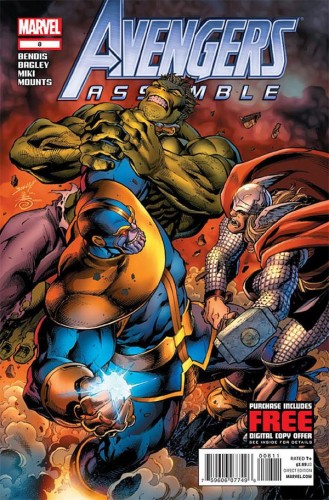 So let me come clean and say, this is the only issue of Avengers Assemble I’ve actually read. I’ve always had an extreme distaste for Marvel’s to pander to the non-existent audience of people who love the movies they make so much they come and read the comics.

Sorry Marvel. You should know better by now.

And when this book first got solicited, that’s all it seemed like to me – a way to pander to the cinematic audience. Throw together the same that exists in the film, throw in Thanos, throw in the cosmic cube, and BAM! You got the perfect bridge to bring film viewers over into the comic book universe, right?

All the economic pandering aside, this is not a bad comic.

But it is most certainly not a great comic.

Perhaps my feelings on the book would’ve been far different had I been following it from the very beginning, but as a regular comic reader who has to suffer through all of the books I read being pulled into crossover after crossover several times a year, if you hand me a comic whose plot revolves around Thanos merging himself with a cosmic cube and threatening all of reality that isn’t part of some big crossover event, I could honestly give no damns about how that plot is going to turn out. There’s no drama, there’s no impact.

And that’s essentially the entirety of this comic. Thanos merging with a cosmic cube (not the real deal, legitimate one, one that the US government created that is entirely unstable) and all the members of Avengers, Guardians of the Galaxy, Fantastic Four members, and slightly obscured by shadows President Barack Obama crapping their pants at the idea of Thanos taking all of reality for a spin on his crazy train.

That’s not to say there aren’t some worthwhile moments.

We get a nice little heroic speech from Thor pleading with his comrades to head back to Earth and prepare the heroic forces for Thanos’ oncoming assault while he did his best to stay the mad titan’s hand. And that’s cool. It’s always cool when a character does the noble, self-sacrificial thing so their homies can go come up with a better plan, but it really does beg the question as to why the Avengers don’t have at least one other god-level/cosmically powered member (which appears to be getting rectified in the team re-building.)

Of course Thor’s attack on Thanos does essentially nothing and he casts him, the Avengers and Guardians into everyone’s favorite parallel universe – THE CANCERVERSE! Which leads to this fantastic exchange: 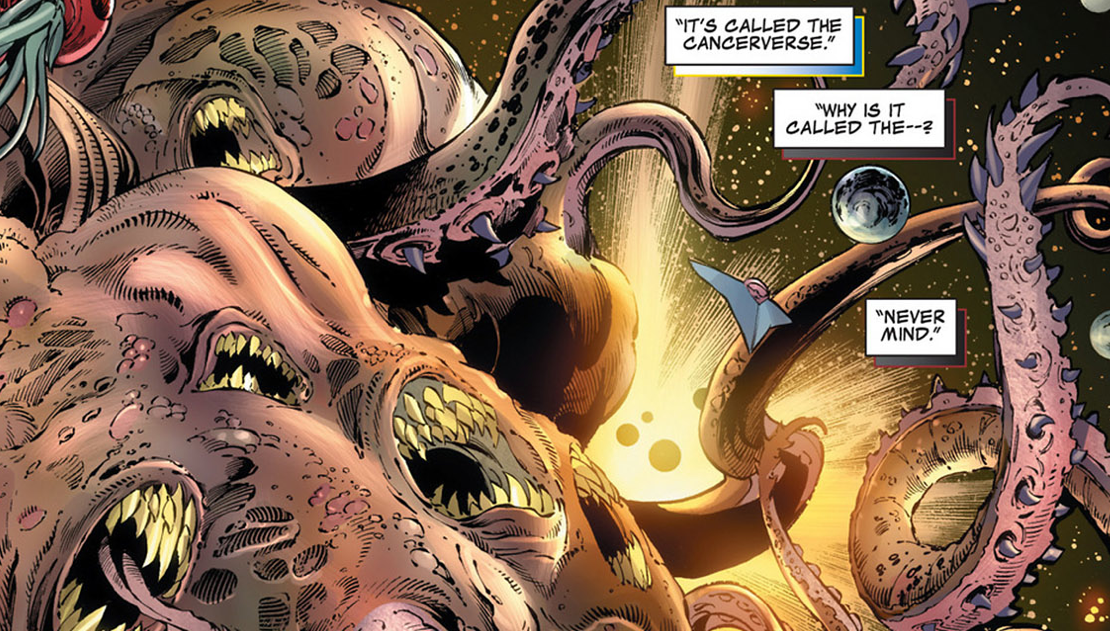 But lo and behold, guess who else Thanos shunted off out of the 616 universe – you guessed it, the blatantly obvious deus ex machina needed to complete this story, The Elders of the Universe (and its at this point I’ve really got to ask, does this book actually exist to cater to the film-to-comic crowd, because I’d have to imagine them being confused as all get out right now.)

Then the Elders of the Universe give Iron Man a big Cable-esque, Marvel vs Capcom style gun with which to destroy Thanos’ cosmic cube and then the Elders take him away to some space prison or something. And we see the Badoons (THANOS ARMY FROM THE AVENGERS MOVIE! DO YOU SEEEEE! DON’T YOU SEE HOW THIS IS SO NEW READER FRIENDLY? LOVE US AND GIVE US YOUR MONEY – Marvel) get really angry.

Oh, and Starlord invites Iron Man to join the Guardians of the Galaxy.

Annnnnnnd none of this will be remotely important until Avengers 2/Guardians of the Galaxy comes out.

I’m not mad at this comic, maybe a little jaded – because this is very much the same kind of storytelling we’ve seen Bendis do with the Avengers for far too long – but I’m not mad this comic.

Because it’s glaringly obvious this comic book is not for me. It’s for an audience that isn’t there. And it’s filled with things those people would not really understand anyway.

Final Rating: 3/5 – Two of those points coming from Bagley’s art and one them because I raelly love Groot.