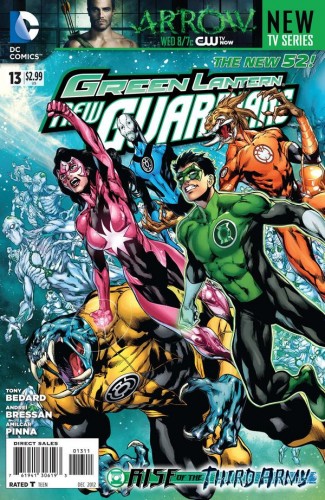 Kyle’s new mission to learn how to harness the various emotional spectrums, but he’s only really mastered Willpower (duh) and Hope (remember War of the GLs?), so now it’s time for an issue to issue journey across the spectrum. First up? Rage. Well, actually, first up we see Kyle getting ready for the first time he was going to meet Alex’s dad, and then we see Atrocitus put him through her tombstone. It’s good imagery. He figures remind Kyle about her violent murder and that will trigger the Lantern’s rage. No dice, he does get pissed thinking about his dad though. Fed up with the lack of progress, Atrocitus tries a more…harsh approach.

Off to the middle east they go, where soldiers on the hunt threaten the locals. A boy is chosen to be killed if they can’t offer up information, and the father submits to die in his place. The whole while Atrocitus taunts Kyle about his lack of a father, all the way until the man dies and Kyle explodes in rage and just up and obliterates the monsters that would kill innocents. When he turns his rage on Atrocitus, however, the Lord of Rage shuts him down and leaves. Kyle is left to return to Carol to continue their quest, his heart darkened by the lessons taught by Atrocitus.

Oh, and there’s some Third Army stuff that happens too, but like GL and GLC…not much.
What I liked:

So with no Major Force, who killed Alex?

The art ruined this issue.

I can’t fully support the removal of Kyle’s dad, I mean, yes, Kyle having father issues works, but I liked his dad! Thankfully it’s not anywhere close to what happens with some characters parents throughout reboots and relaunches (the Kent’s), and for the sake of most readers they might not even know it was a thing. But when I started reading comics again, it was because I saw Green Lantern #150 on shelves and that it was still Kyle and I had to buy it. That was the issue where he finally met his dad, and it was just one giant awesome moment that was never followed up on. I guess I can stop waiting now, right?

So how is Kyle not already able to master love? He’s got will and hope on his list, but he’s always been famous for, well, being in love. I would have expected that one to come more naturally to him.

Then again, with the darkening the character goes through during the issue, and with Fear being up next, maybe Love is just going to be a palette cleanser later on.

Kyle needs a girlfriend…and has anyone seen Sora? Does she even exist anymore? I know she was on the cover of the first issue of GLC, but I haven’t seen her anywhere. So yeah, Kyle needs a new woman in his life already. Maybe one that is reboot free? Maybe fridge proof?

I spent way too much time transcribing the names of these artists.

If not for the art, this book would be a seven.