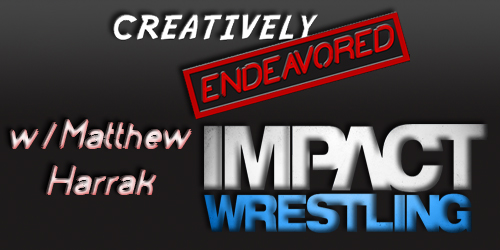 – I liked the reveal of Devon at Bound For Glory and I like it even better that he’s not he’s not the leader of the whole group. His reveal was good but they need a bigger star to be the figurehead of this whole group.

– Bully Ray, one of the hottest heels in the last 2 years, just had the crowd begging for him to be in the main event. With all the speculation that Bully Ray was going to be revealed as part of Aces and Eights, I wonder if this will turn into a Team 3D reunion as well.

– Woah Christy Hemme is stepping it up tonight!

– If there’s anyone who can bring some prestige back to “red belt” by defending it every week, Samoa Joe could definitely do so.

– Man, they are making Joe look like a MONSTER and it’s perfect. The Samoa Joe who was once the TNA World champion seems to be coming back to Impact.

– “Young love”? Tara’s definitely over 40. And that’s not a knock against her, just against Taz’s horrible commentary.

– Loving the push for next week’s “Championship Thursday”. That’s what brings in ratings.

– While I’m not a fan of Hernandez, I HATE the fact that he’s now using a shoulder block as a finisher! At least he’s not killing people with the Border Toss.

– Oh dear God, that atrocity of a belt is back?! Didn’t they learn their lesson from the ridicule the belt received the last time?

– At least it’s a black strap this time and not purple. Ugh.

– Maybe WWE should be using TNA’s belt guy. It took them 4 days to get Jeff a new belt while we’ve been waiting a year for the new WWE title.

– Well I guess if TNA isn’t going to give Austin Aries new music, he thought he’d sing himself to the ring.

– “The appletini is always half full.” – Awesome line.

– Nice match and set up that allowed AJ to walk away without looking weak. I just hope they’re not going to try another ill-fated heel turn for Styles. His offense and baby face is just too “babyface” to be a really effective heel.

– That was a terrific segment for Matt Morgan. That really made me believe they’re going to do something with him now. And I know I’m in the minority in seeing the potential of Morgan but I’m telling you, booked correctly, he has the size, strength, charisma and agility to be at least as good as Kane or the Undertaker. He just hasn’t caught any of the breaks.

– Wow it’s really been exactly a year since this website (Creatively Endeavored) and my name hit it’s one defining moment since I broke the news of Gail Kim’s return to TNA and James Storm’s TNA World Title win. Since then I’ve been to numerous WWE & TNA shows & have had the privilege of interviewing some of the best in business today, including Bobby Roode and James Storm. Now I get paid to do what I love and by pure coincidence James Storm uses one of my wallpapers as his Twitter profile picture. It’s amazing what 12 months can do.

– I guess we’re getting a bit more of Roode and Storm. I don’t really know what they can do to top their Bound For Glory match though.

– Too bad they didn’t cut to commercial before that botched clothesline.

– Damn this is a long match. And not in a good way.

– Okay that was the same finish they’ve been using for months. They need to start revealing members quickly because the “mystery” is getting tired.