Following the news last weekend that Cartoon Network was chopping the DC Nation for 2012, with new episodes of Young Justice Invasion and Green Lantern The Animated Series to air in 2013, I shared with you a preview video of YJ Invasion Season 2 that had been circulating on the ‘net.

After combing through it, and discounting what has already been seen (including those we recapped from the cancelled yet online avialable “Before the Dawn” episode, Season 2, Episode 10), here are the Top 3 News Nuggest from it.

Double Dose of Deathstroke on TV?

First small screen appearance: Deathstroke or his Ravager daughter tangles with Young Justice? See the white ponytail below? Is that Slade Wilson or his daughter Rose Wilson alongside Tigress (a.k.a. Artemis)? Interesting.

Second small screen appearance: Deathstroke is also set to appear in CW’s Arrow in a few weeks! Looks like this will be Deathstroke’s first appearance in 2012 since new Young Justice Invasion episodes won’t air until 2013.

With November’s “Damages” episode of CW’s Arrow (based on DC Comics’ Green Arrow) we’ll see Deathstroke tangle with Arrow. Deathstroke’s mask has already made an appearance surfacing in that series’ premiere.

Looks like Ollie Queen may have cost Slade Wilson his eye during his years stranded on that mysteryious island. I wonder what other changes there will be made? We’ve already seen references to the names Speedy, Merlyn, Drakon in the show in interesting ways.

Check out a released Deathstroke image to the right. There are also a few images of the live-action Deathstroke in action that here and here (10 spectacular pics in total) and they all look pretty cool too.

And, apparantely, Deadshot will also appear in this season of CW’s Arrow (see pics here). No word if the Suicide Squad will be in tow.

Is Trigon’s daughter Raven, of Teen Titans fame, far behind?

Does Tula come back from the dead?

Looks like we’ll see the Justice League trial over their actions during the Season 1 finale.

And, is that Black Manta or his son Aqualad facing off with Miss Martian in the last pic? whomever it is, it looks like Miss Martian’s seeming lobotomy of Aqualad has consequences for her too (seen in the “Before the Dawn” episode that has slipped onto the Internet).

Well, when we first saw these four teens, the similarities to the Super Friends was uncanny and deliberate. And, the pay-off will come in 2013. 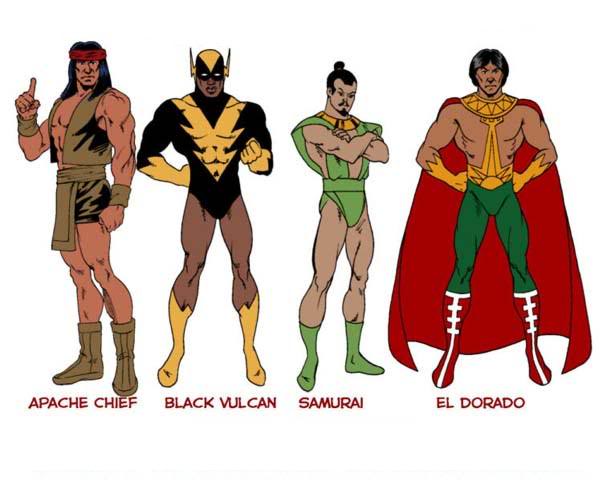 Pic one is the electric powered teen inspired by Black Vulan.

The second image appears to a kid modeled on the wind and elements manipulating Samurai.

Third pic is of Blue Beetle’s buddy Ty who now has giant powers a la the old school Apache Chief.

Man, these kids look different from the classic ones (see above right).